Autodesk’s Revit Structure is used to create a modern superstructure in the large-scale redevelopment of Pembury Hospital in Tunbridge Wells.

In autumn 2006 independent engineering and environmental consultant Gifford’s structural engineering team under the leadership of Tony Bassett and the technical guidance of Lee Zebedee worked with Excitech’s consultants and trainers to review the relatively new Revit Structure software from Autodesk. After running a detailed assessment it was decided to invest in five seats of Revit Structure to be used on a hospital project that it was undertaking late in 2006.

The proposed redevelopment consolidates Pembury Hospital and Kent & Sussex Hospital into one new, modern facility on the Pembury site.

The new facility, which includes 512 bedrooms, will be the first hospital in the country to have completely single rooms. The new development also boasts 1,200 car parking spaces and a helipad to cater for air ambulances on the upper part of the site.

The project was awarded in December 2006 to the Equion team led by Laing O’Rourke, including architects Anshen+ Allen and M&E engineers DSSR. Gifford was nominated to provide the following design solutions:

The main hospital building with a total floor area of approximately 66,000m, has an in situ concrete frame on RC pad foundations with flat post-tensioned floor slabs and traditional in situ concrete columns and retaining walls.

The structure is braced by concrete shear walls to the stair/lift cores, while its height is squeezed between the rock line and a maximum planning restriction level.

Due to the nature of the sloping site and the planning restriction, the building has been designed to vary between three storeys at the top of the hill and seven storeys at the bottom.

As a consequence of the sloping site, large propped retaining walls, up to 11m in height, retain the earth beneath the building. The ground floors are cast in situ ground bearing or suspended concrete slabs depending on whether they are in a cut or fill condition.

The scale of the hospital dictates that the main building is split into four separate structures with a three-storey split-level independent car park situated at one end of the main building with over 500 spaces.

Its top deck will be level with the ground at the entrance to the building. For each floor level cut into the ground, a series of full length retaining walls run along the length of the building cut face, designed to store any excess cut and thus avoid the removal of material from the site.

The structural elements of the project were split over four Gifford offices: Southampton, London, Leeds and Dubai with approximately 25 members of the Structural staff dedicated to the project. This geographical spread was a major factor in considering how to split the model vertically into the following manageable portions.

When completed, each model represented about 20 MB data or 160 MB combined. Mr Zebedee explains: "We did consider a horizontal split to the models, but due to the manner in which we were attacking the design and the analysis software links, the vertical split suited the process in workable chunks perfectly."

The main hospital building with a total floor area of approximately 66,000m?, has an in situ concrete frame on RC pad foundations with flat post-tensioned floor slabs and traditional in situ concrete columns and retaining walls.

All the Gifford 3D design and visualisation was done in Revit Structure from the very outset, but initially all 2D working drawings were exported from Revit and ætweaked’ in AutoCAD prior to issue. As the Gifford Revit teams gathered size and experience, this practice was quickly omitted with all 2D and 3D data exported directly from Revit.

Mr Zebedee adds: "We surprised ourselves with how quickly we became efficient enough to take AutoCAD out of the equation. It’s a big step on a project this size and with the timescales we faced."

As work progressed, the eight separate Revit models were combined on a weekly basis for internal review and co-ordination checking. The use of NavisWorks and in-house video conferencing facilities enabled the team to work over distance in a manner previously unthinkable on a project this size with 50 percent of the structural design and detailing produced overseas.

Mr Zebedee elaborates: "I can’t stress enough how important these practices were in making this a successful project. We arranged video conference calls with all four offices involved in the project and could fly around the NavisWorks model with little more effort than walking across the office to have a discussion. The combined Gifford Revit model when exported to NavisWorks reduced in size from 120MB to just under 800KB, making it easy to manage and accessible to all Gifford staff involved." 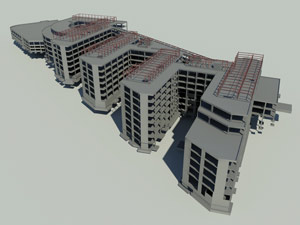 As work progressed, the eight separate Revit models were combined on a weekly basis for internal review and co-ordination checking.

Additionally, on a weekly basis the combined Gifford NavisWorks model was uploaded to Laing O’Rourke’s extranet system where it was merged with the architect’s models, M&E external works and Laing’s own site models, creating a complete 3D prototype digital building, before being issued back to A-site for all design team partners to review and use.

Gifford downloads this file on a weekly basis for use and to help in co-ordinating decisions. Mr Zebedee recalls one specific situation when the Gifford team needed to introduce an element of vertical support to the top of a stair flight section. The obvious answer was to introduce a short length of reinforced concrete wall within the external faþade build-up, but a quick spin round the combined design team model revealed that the panel was a glazed element and a reinforced concrete wall would have been completely out of the question in that position.

Mr Zebedee says, "this is the sort of issue designers face on a daily basis which traditionally on a project of this size would waste a considerable amount of valuable time, sifting through the hundreds of architect’s drawings attempting to identify what the faþade solution should be for that exact location". Laing O’Rourke has used the combined models for site planning, site inductions, material take-offs and to set up a project timeline to show the progress the building is making against an agreed construction sequencing plan.

Mr Zebedee believes that its use of Revit Structure has revolutionised the way Gifford works and praises the ease of use of the product, highlighted by how quickly the team was up and running against a very aggressive time schedule. Gifford currently has Revit Structure for more than 70 CAD seats and the majority of building structures projects are now undertaken in Revit.

Gifford has also invested in Revit MEP, currently available on 27 CAD seats to strengthen its design base and reinforce leadership in sustainable buildings.

Tony Bassett, director of Gifford, says: "The use of Revit Structure, NavisWorks and a whole suite of modelling tools has helped us to streamline our project delivery and speed up the time from concept to on-site information releases. Key improvements have been found in communication, decision-making, accuracy, site co-ordination and inter-office working.

"We invested heavily in both software and training through the duration of the project which places us in a very strong position for subsequent projects and bids.

"This is key to being a leading edge engineering consultancy with the use of CAD design tools supported and assisted by companies like Excitech."