Support for the Quadro RTX 5000 means the Dell Precision 7540 is now viable for GPU rendering, VR or real time viz

Dell has re-engineered its Precision 7540 mobile workstation so it can take the more powerful Nvidia Quadro RTX 5000 (16GB) GPU. Previously, Dell’s mainstream 15-inch mobile workstation was limited to the Quadro RTX 3000 (6GB), meaning those who needed a GPU with more power (or more memory) for real time viz, GPU rendering or VR had to shop elsewhere, or choose the significantly larger 17-inch Dell Precision 7740.

This new update to the Precision 7540 has taken everyone by surprise, not least Lenovo who previously was the only major manufacturer that was able to offer the Quadro RTX 5000 in a 15-inch mobile workstation (read our review of the ThinkPad P53 here).

With Dell’s updated Precision 7540, Lenovo has not only lost its market differentiator, but Dell reckons its re-engineered cooling system means it can run the Quadro RTX 5000 at 80W, 10W more than the ThinkPad P53.

Dell admits that the 17-inch Precision 7740 is still its fastest Quadro RTX 5000-based mobile workstation, as it can run the GPU in excess of 80W because the chassis is bigger and the cooling system more efficient. But the 15-inch form factor is by far the most popular because of its comparative portability. 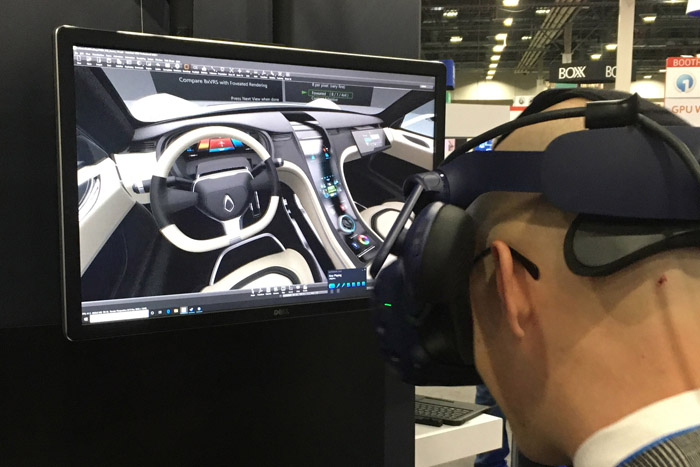 VRS (also known as foveated rendering) works by only rendering at the highest quality the part of the scene where the user is looking. In Dell’s demo, which was running on a Dell Precision 7820 tower workstation with two Nvidia Quadro RTX 6000 GPUs, you could sit in the driver’s seat and see the highly detailed rendering follow your eye in real time.

This type of technology is key in VR workflows where quality is of paramount importance. It means GPU resources can be targeted where it matters and not wasted rendering pixels at unnecessarily high quality in your peripheral vision where it won’t be noticed. You can read more about this forthcoming VRED feature in this Autodesk blog post.