It has been over 10 years since AMD’s CPU division was a serious contender in the workstation market. In the mid-2000s its Opteron processor had a significant performance advantage over Intel. The lead was so big that it wasn’t just the specialist system builders that offered Opteron workstations. All the major OEMs, apart from Dell, offered one too. AMD’s advantage, however, was short-lived and in the years that followed, the market once again became dominated by Intel.

Things changed in 2017 with the launch of the AMD Ryzen Threadripper CPU. While Threadripper might not have an outright performance lead over Intel, it has already had a big impact on the market due to its competitive price/performance. Delivering up to 16 cores at high frequencies for under $1,000, Threadripper was the catalyst for Intel slashing prices on its high core count Core i9 CPUs, which is a win for everyone.

As one would expect, the machine shines when rendering, completing our KeyShot test render in 206 seconds, more than three times as fast as a typical quad core CAD workstation like the Fujitsu Celsius W570power+. It doesn’t, however, reach the heights of the Scan 3XS WI6000 Viz, which completed the test in 141 seconds, thanks to its 4.2GHz overclocked 18 core Intel Core i9 7980XE CPU.

While the WS-1160A stands out when hammering all 16 cores on a ray trace render, it doesn’t fare as well in single- threaded workflows. The 111 seconds it took to export an IGES model from SolidWorks is on par with the Lenovo ThinkStation Tiny P320, which has a low wattage Intel Core i7-7700T CPU. It’s around 18% slower than the Scan 3XS WI6000 Viz.

The machine features 64GB of 3,000MHz DDR4 memory spread over four 16GB DIMMs to get the most out of Threadripper’s quad channel memory architecture. The decision to use 3,000MHz memory, as opposed to the standard 2,400MHz, is important here as memory speed can have a big impact on performance on Threadripper, particularly when rendering. Workstation Specialists told us that it can go even higher than 3,000MHz, depending on demand and availability in the market.

The WS-1160A is not just about its fast multi-core CPU. Our test machine also came with the air-cooled version of the powerful AMD Radeon Vega Frontier Edition GPU. This dual-height graphics card is a bit of a black sheep in the world of professional graphics. It’s not a fully-fledged member of AMD’s Radeon Pro WX family, but does use the same drivers so should get all the same benefits, including application optimisations, but without the certifications.

On test, it delivered good scores in our game engine design viz applications. It also gave a solid performance when we tested it in VR with the Oculus Rift. Headset connection is straightforward as, unlike most professional GPUs, it has one HDMi port in addition to three DisplayPorts.

In the SPECapc for PTC Creo 3.0 benchmark, the scores were impacted by the lower single-threaded performance of the CPU, but it should still be more than powerful enough for 3D CAD and BIM. If you really need to boost 3D performance, Threadripper has a ‘gaming mode’ that turns off half the CPU cores upon reboot. In Creo, we experienced a 10% increase in 3D performance in shaded-with-edges mode, but the trade-off is that your CPU render times will almost double.

We did have an issue with the machine not performing properly with SolidWorks 2015 and hence delivering lower scores in the 3D benchmark. However, AMD said users should not experience this performance drop in later releases of SolidWorks and the issue with the 2015 release should be remedied in a future driver release.

As Vega is architected for multi-tasking, we were able to set a render going in Radeon ProRender and still smoothly manipulate a large CAD assembly in SolidWorks 2017, despite both processes competing for GPU resources. If you want to boost GPU rendering performance further, you can also add a second GPU. The AMD Radeon Vega Frontier Edition is exceedingly power hungry, drawing up to 300W — even more than the ultra-high-end Nvidia Quadro P6000, which is rated at 250W.

Add the 180W Threadripper 1950X CPU to the mix and this could present a bit of cooling challenge, but the WS-1160A is equal to the task. With a liquid cooling system for the CPU and large low-duty fans to keep air flowing through the machine, noise is kept to a minimum, even under heavy loads.

Overall, the WS-1160A is a powerful, flexible workstation that will deliver in many different workflows, from CPU and GPU rendering, to real-time viz and VR. At £3,491 + VAT, it’s not a whole lot cheaper than the Scan 3XS WI6000 Viz, which offers faster single-threaded and multi-threaded performance with its overclocked Intel Core i9 7980XE CPU.

But if you simply want a CAD machine that delivers fast renders, swap out the powerful AMD Radeon Vega Frontier Edition in favour of a AMD Radeon Pro WX 5100 or Nvidia Quadro P2000 and go down to 32GB of RAM and this should bring the price down to under £3,000. 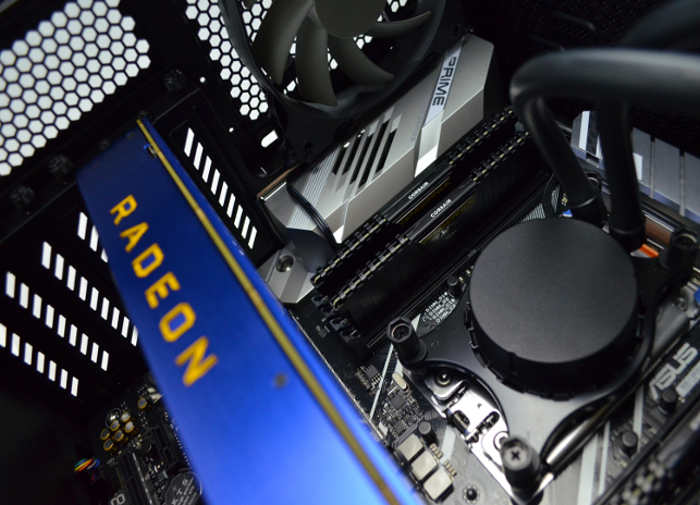 Rendering beyond the CAD workstation
When rendering work is on the cards, what’s the best way for a firm to get its machines and its workflows up to speed?