Hollywood quality, fully interactive graphics could be coming to a desktop near you soon

It was the first time Hollywood quality visual effects, albeit with a few cheats, had been done in real time. Lighting moved around a scene interactively as ray-traced effects, including shadows and photorealistic reflections, were rendered at 24 frames per second.

The dampener was the hardware needed to achieve this level of realism – a personal AI supercomputer called the Nvidia DGX Station that comes with four Tesla V100 GPUs and a bill for £60k.

Most people expected it to take 5-10 years for this technology to trickle down to a single GPU in a desktop workstation. But, amazingly, with Nvidia’s new ‘Turing’ Quadro RTX family of GPUs, announced last week at professional graphics conference Siggraph, it now looks set to become a reality by the end of the year when the “world’s first ray-tracing GPUs” are set to ship.

Nvidia CEO Jensen Huang described Turing and RTX as the greatest leap since the introduction of the CUDA GPU in 2006. “This fundamentally changes how computer graphics will be done, it’s a step change in realism,” he said. Not surprisingly, Nvidia has its sights set on the $250 billion visual effects industry, getting a slice of the colossal budgets currently spent on CPU render farms. But the new technology looks set to impact all areas of 3D graphics – of course, including design visualisation.

Previously, designers and architects would either have made compromises in quality using rasterising techniques for real time rendering or waited minutes or hours to get photorealistic results back from a CPU render farm. With Quadro RTX, Nvidia says designers can now iterate their product model or building and see accurate lighting, shadows and reflections in real time.

On stage at Siggraph, Huang illustrated this with a couple of impressive design viz focused real time ray tracing demos – one from automotive manufacturer Porsche and another of an architectural interior.

For its 70th birthday, Porsche created a trailer for its new 911 Speedster Concept car. But rather than ray trace rendering it frame by frame on a CPU render farm, the ‘movie’ was generated in real time inside Unreal Engine using a pair of Quadro RTX GPUs. The virtual car is fully interactive — lighting can be adjusted in real time and the car viewed from any angle, with reflections on the physically-based materials updating instantly. Epic Games, the developer of Unreal Engine, refers to this as offline-quality ray-traced rendering in a game engine.

“Porsche’s collaboration with Epic and Nvidia has exceeded all expectations from both a creative and technological perspective,” said Christian Braun, manager of virtual design at Porsche. “The achieved results are proof that real-time technology is revolutionising how we design and market our vehicles.”

Huang then sought the attention of architects through a real time, ‘photoreal’ ray-traced global illumination demo set in the lobby of the Rosewood Bangkok Hotel.

The interesting thing about this demo was that Nvidia’s RTX ray traced viewer had a live connection to both Autodesk Revit and SolidWorks. Any edits or material changes made in the popular BIM and CAD tools instantly showed up in the viewer. Different lighting options could be explored at different times of the day. The demo illustrated how photorealistic visualisation could be used to influence design in real time and not just for polished renders for client communication or marketing.

A new type of GPU

Until recently, all Nvidia GPUs including the current ‘Pascal’ Quadro P Series, only featured CUDA cores.

This changed with ‘Volta’ with the arrival of Tensor cores in the Tesla V100 and Quadro GV100 that are designed specifically for deep learning, a subset of Artificial Intelligence (AI).

‘Turing’ adds a third type of core, the RT core, that is designed specifically to accelerate ray tracing operations. And it is these three processors working together (ray tracing on RT cores, shading on CUDA cores and deep learning on Tensor cores) that allows Turing to deliver significant performance improvements for ray trace rendering – six times faster than Pascal, says Nvidia.

Nvidia is using deep learning in different parts of the graphics pipeline to cut down on the level of work required to generate photorealistic output. Earlier this year the company introduced the use of Tensor cores for AI-based de-noising, which Huang describes as filling in all the spots that the rays haven’t reached yet. Now Nvidia has introduced deep learning anti-aliasing (DLAA), a new technique which trains a neural network to take a lower resolution image and turn it into a higher quality image.

There’s a lot going on here, some of which should become clearer in the coming months, but in short Nvidia is using a combination of AI techniques and different processing engines to accelerate ray trace rendering, rather than just relying on faster CUDA cores to do everything.

The amount of memory available on these cards is significant as this has been a barrier to adoption for GPU rendering, particularly in visual effects, where datasets and textures can be huge.

At 48GB, the RTX 8000 offers significantly more than its predecessors, the Quadro GV100 (32GB) and Quadro P6000 (24GB). All Quadro RTX cards support NVLink, a proprietary Nvidia technology that allows cards to be installed in a workstation in pairs and share their memory. It means those who have the budget for two Quadro RTX 8000s can effectively have a GPU with a colossal 96GB.

In addition to DisplayPort, all three GPUs will support USB Type-C and VirtualLink, a new open industry standard being developed to meet the power, display and bandwidth demands of next-generation VR headsets through a single USB-C connector. 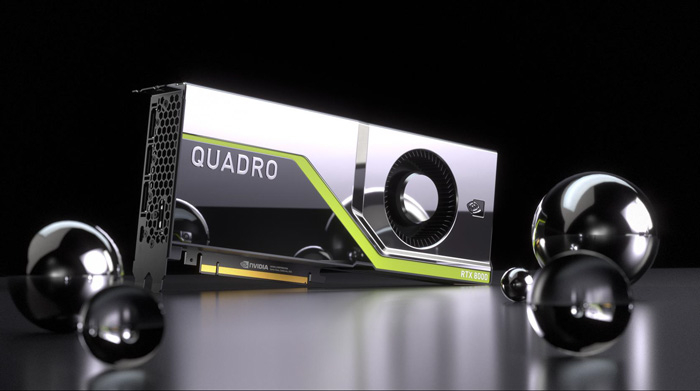 Quadro RTX 8000 is one of three ‘ray tracing GPUs

At Siggraph, much of the focus was on Unreal Engine, which uses the Microsoft DXR API to access Nvidia’s RTX development platform that helps ISVs develop RTX-enabled applications.

However, Nvidia also has buy in from several design and engineering focused software developers and even more in visual effects.

Dassault Systèmes announced that SolidWorks Visualize will use Nvidia’s OptiX denoiser for ‘instant life-like rendering’ while it plans to use RTX in Catia for rendering with life-like quality materials and to accelerate VR rendering for immersive experiences and design validation.

Siemens will extend its support for GPU-based rendering in Siemens NX Ray Traced Studio to include AI denoising and MDL support.

Meanwhile, users of SketchUp, Cinema4D and Rhino will get access to Nvidia OptiX denoiser technology through the Altair Thea render plug-in.

With the launch of Turing and its Quadro RTX ray-tracing GPUs, Nvidia has sent ripples through the computer graphics industry. Out of the blue, real time ray tracing looks to have arrived and with it the potential to transform the way architects and designers use photorealistic visualisation in their workflows. We look forward to test driving the new cards later this year when they launch in Q4.

Welcome to the future
The age of the reality mesh
Bridging the gap: engineering & construction
People who live in glass houses
The clone wars
BIM for temporary works
Singapore in bloom
Kicking goals
Advertisement
Previous Post
Next Post