With its FirePro GPU, this single CPU desktop offers an interesting alternative to a dual Xeon workstation, but is let down by a disappointing case. By Greg Corke

The XFX Type 01 chassis is a bit disappointing

We first came across Yoyotech last year with the M-cube WS, a compact CAD workstation that packed a real punch. Now it has traded those sleek orange lines for something that looks altogether more industrial – a full size desktop workstation tuned for high-end graphics and compute.

The Proteus W8100 WS gets its name from AMD’s powerful professional GPU, the FirePro W8100. This 220W, double height board boasts 8GB GDDR5 memory making it ideal for handling massive datasets in high-end 3D design viz applications such as 3ds Max or Maya.

However, the 220W double height board is far more than just a graphics card. Thanks to the FirePro’s adaptable GCN architecture, it can also double as a compute board, number crunching in OpenCL-accelerated applications including V-Ray RT (for ray trace rendering).

The interesting thing about the FirePro W8100 is you can do graphics and compute at the same time. Set it to work on a ray trace render and it’s still responsive when you need to spin your 3D model on screen.

Alongside the hugely powerful GPU there’s a six-core Core i7-4930K CPU, overclocked to 4.2GHz. This Ivy Bridge chip is a good all-rounder, offering a good clock speed and still plenty of cores to support multi-threaded, CPU-based ray trace renderers. However, with new six and eight-core Haswell Core i7 chips literally just out, you may want to talk to Yoyotech about other options.

The CPU is liquid cooled, thanks to a self-contained Corsair H100i cooling unit. There’s a huge fan at the front to draw air over the storage and GPUs, and one at the back for the CPU. The bundled CorsairLINK software gives users one-touch control over the cooling system, while monitoring internal temperatures.

There are profiles for Quiet, Balanced and Performance, all of which are directly linked to fan speed (and indeed fan noise). There’s the obvious temptation to set to Quiet, but this might not deliver sufficient cooling when hammering the powerful internals. By getting a feel for the system users will be able to match the settings to their different workflows, but this might be a tad too complicated for some.

For storage, the machine has a classic two-drive set up, but with a twist. The 256GB Samsung SSD 840 Pro for OS and applications is standard fare, but the 2TB Seagate Solid State Hybrid Drive (SSHD) data drive is basically a normal hard drive with 8GB of MLC NAND flash memory bolted on to cache ‘hot’ data. We’re not sure how useful this will be for CAD data workflows, but it’s an interesting technology nonetheless. 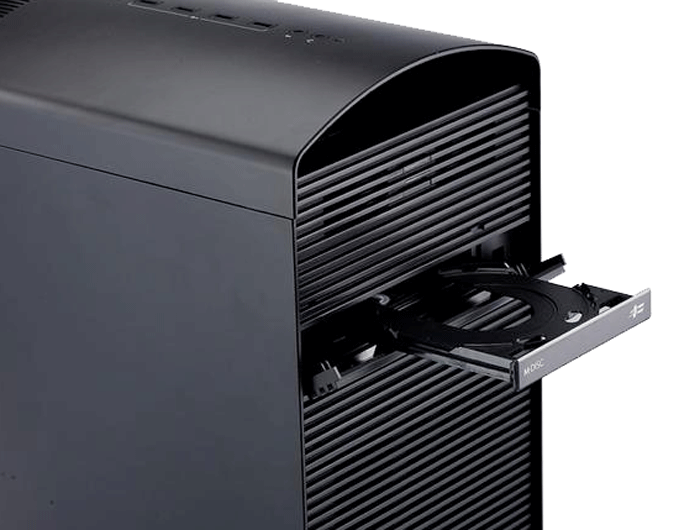 For a workstation that sets you back just under £3,000 the case is disappointing. It looks and feels plasticky and the side panels are flimsy. In addition, what at first look like handles to move the machine around are actually just for decoration and have no structural strength. If this added to the aesthetic we might understand but the whole case isn’t exactly a looker. Even the minimal front grille, its best feature, hides important functional buttons (we inadvertently reset the machine when trying to open the DVD drive). The saving grace is four nicely spaced USB ports on top with space to rest external drives.

Overall, Yoyotech has assembled a specialist workstation, which offers an interesting proposition to users of design visualisation or simulation software. Taken on its own the FirePro W8100 is just a powerful graphics card, but if you work with an OpenCL-compatible application it could be a more cost effective way to get high-end compute capabilities typically found in dual CPU workstations.

But then there’s the disappointing chassis. The good news is Yoyotech does offer a variety of other cases, from manufacturers including Corsair, Fractal design and Coolermaster, so there should be some decent alternatives there.