It wasn’t that long ago that mobile workstation manufacturers only had two or three machines in their range. But times have changed. And now with eight models in its ZBook G6 family, between them offering power, portability and 2-in-1 capabilities, HP has taken things to extremes.

Weighing in at 1.48kg and measuring 326 x 234 x 17.9mm, the HP ZBook 14u G6 is the smallest and lightest in the family. A 14-inch mobile workstation used to mean a big trade-off in performance, but with new power efficient CPUs and GPUs this is becoming less of a concern. You wouldn’t want to rely on the HP ZBook 14u G6 for real-time visualisation or ray trace rendering, but for 3D CAD and BIM it can stand shoulder to shoulder with machines of much higher specs.

The HP ZBook 14u G6 is built around a power efficient quad core version of the 8th Gen Intel Core processor. With a 15W Thermal Design Power (TDP) – the average power a processor dissipates when operating at base frequency with all cores active – these “Whiskey Lake” CPUs draw significantly less power than the 45W six and eight core CPUs used in mainstream mobile workstations like the HP ZBook 15.

When exporting an IGES model from the 3D CAD tool Solidworks 2019, for example, our test machine’s Intel Core i7 8665U went up to 4.2GHz. And the 85 secs it took to complete the test is on par with most other mobile workstations, including the Lenovo ThinkPad P53 we reviewed in June, which had a six core Intel Xeon E-2276M (2.80GHz, 4.70GHz Turbo).

Of course, performance falls off dramatically in multi-threaded workflows, such as ray trace rendering. With fewer cores running at a lower frequency, we found render times in our Chaos Group V-Ray and Luxion KeyShot tests to be significantly slower than a mainstream six or eight core mobile CPU. However, rather than dropping all the way down to the base clock speed of 1.8GHz, the HP ZBook 14u G6 maintained a solid 2.4GHz with very little fan noise – even when rendering for well over an hour. HP appears to have done an excellent job on thermal management.

The HP ZBook 14u G6 supports up to 32GB of DDR4-2400 non-ECC SDRAM, spread across two SODIMMs. This should be plenty for most mainstream CAD workflows but for those that work with particularly large models (Revit models in particular can be huge) or lots of applications at the same time, this could be a deal breaker. In comparison, a mainstream mobile workstation like the HP ZBook 15 G6 can support up to 128GB.

To help deliver its compact form factor, the machine relies on a single M.2 SSD and you get a choice of NVMe (256GB to 2TB) or SATA (128GB). Some NVMe models are SED (Self Encrypting Drive), for situations where data security is critical.

Both the memory and storage can be accessed easily from the bottom of the machine. Simply remove eight Philips head screws and the service panel pops off. The WLAN module, WWAN module and battery can also be easily replaced.

Once inside the machine, you’ll notice there’s a single fan to cool both Intel Core CPU and the discrete AMD Radeon Pro WX 3200 GPU. More powerful mobile workstations typically have dedicated fans for each but because the ZBook 14u’s processors are relatively low power, it does a perfectly good job with one. 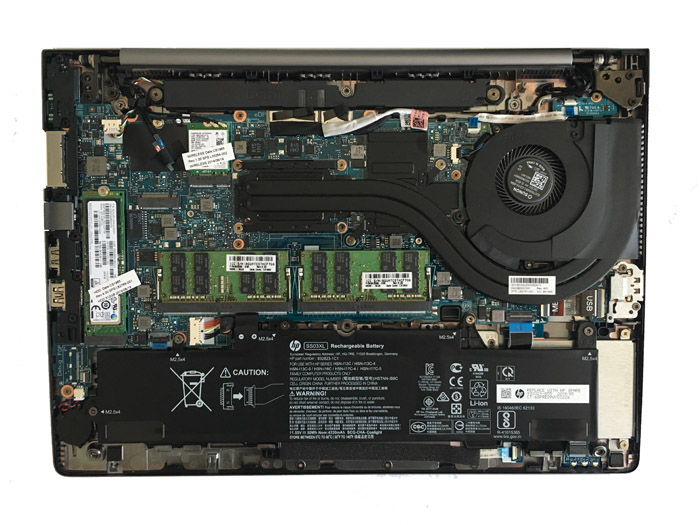 Memory, storage, battery WLAN & WWAN modules can all be got to easily underneath the service panel

With 4GB of GDDR5 memory, the AMD Radeon Pro WX 3200 is a step up from the 2GB AMD Radeon Pro WX 3100 that featured in the G5 edition. The additional 2GB should make a significant difference in certain applications when working with large datasets.

Despite being an entry-level GPU, the Radeon Pro WX 3200 still performed very well with CAD and BIM software, even on our test machine’s 4K panel.

In Autodesk Revit 2020, a BIM application that is notoriously CPU limited (i.e. the CPU can’t keep up with the GPU, so causing a bottleneck), 3D performance was similar to a workstation with a much more powerful GPU. This is simply because the GPU is underutilised. We observed that only 13% of GPU resources were used when moving a 4 million triangle building model on screen. In short, even if the HP ZBook 14u G6 did have a faster GPU, you’d be unlikely to get any better 3D performance.

Solidworks 2019 is also CPU limited, but nowhere near as much as Revit is. Using our 3.6 million triangle PC test assembly we got a fluid 22 frames per second (FPS) in shaded with edges mode and 13 FPS when we increased render quality by enabling shadows, RealView and Ambient Occlusion. This is on par with more powerful GPUs such as the Radeon Pro WX 7100.

When it comes to 3D performance, Solidworks is typical of most 3D CAD tools, but this is set to change in Solidworks 2020. The new release, due to launch soon, will feature a new graphics engine that is much less CPU limited because it offloads more of the graphics calculations to the GPU. As a result, it also uses more GPU memory, with medium to large assemblies typically using somewhere between 2GB and 4GB.

The new OpenGL 4.5 graphics engine is currently available as a beta option in Solidworks 2019, which we used for testing. Performance immediately shot up to a silky smooth 43 FPS in shaded with edges mode. However, when RealView, shadows and Ambient Occlusion was enabled, performance dropped down to 12 FPS. With more powerful cards like the Radeon Pro WX 5100 and Radeon Pro WX 7100 you can expect 20-40 FPS, which gives a much better experience. This shows the Radeon Pro WX 3200 doesn’t really have the power to take on more demanding graphics tasks, especially at 4K (3,840 x 2,160) resolution.

Rendering more pixels (4K has four times as many as FHD (1,920 x 1,080) generally puts a greater load on the GPU so this could influence your choice of panel. The laptop can be configured with a range of FHD or 4K IPS panels, some of which are touch-enabled.

Two of the FHD models feature HP SureView, which is designed to combat what HP describes as ‘visual hacking’ (short for someone else looking at your screen) by significantly reducing the viewing angle at the touch of a button. To protect from prying eyes that might come from further afield, the HP Privacy Camera allows you to physically shut off the 720p / Infrared webcam.

Our test machine came with an LED-backlit 4K, 600 nits, 100% AdobeRGB panel. It’s a good quality bright display that delivers super sharp lines for precise CAD work. Corner to corner it’s only 14-inches so you need to use Windows scaling in order to see text and icons. By default, this is set to 300%, although we found 200-225% offered a better balance.

The machine can support up to two external displays via the HDMi or Thunderbolt 3 (USB 3.1) ports on the right-hand side of the machine. Here you’ll also find a USB 3.1 Gen 1, Gb Ethernet, Docking Connector and SIM card slot (which works with the optional WWAN module).

The chassis is made from CNC machined aluminium and feels solid and well built. The full-sized backlit chicklet keyboard is pleasant to use. We experienced a little bit of give in the middle section, but only when pressing keys particularly hard.

As you’d expect for a machine of this size, there’s no room for a numeric keypad. The touchpad is of a decent size and there’s also a Pointstick in the middle of the keyboard, for those that like their input devices ‘old school’. 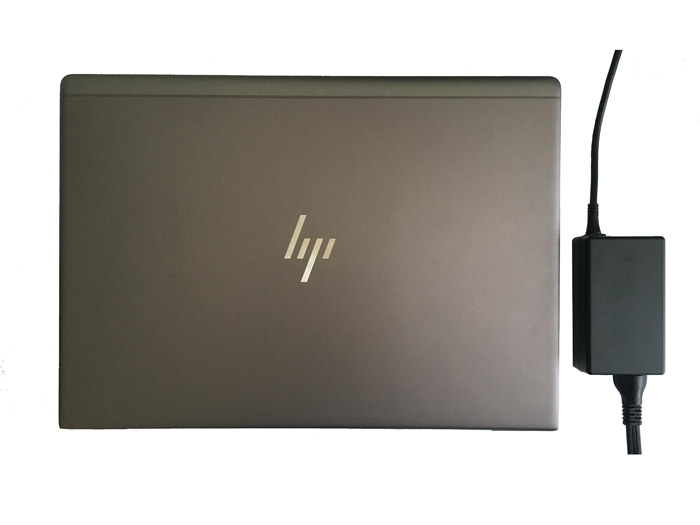 The 65W PSU is tiny and weighs a mere 300g, significantly less than the PSUs that power most mobile workstations

Like all of HP’s enterprise-class laptops, the ZBook 14u G6 is big on security. There’s a FingerPrint Sensor and Windows Hello technology for face authentication. These are standard fare, but HP also has some special technologies of its own.

These include HP SureSense, an AI-based malware defence solution that is said to offer enhanced ransomware protection; HP SureClick, which puts all web browsing in a container so it will not infect the rest of the machine if an insecure website is visited; HP SureStart to protect the BIOS; HP SureRun to protect against an attacker turning off antivirus; and HP SureRecover, to help non-experts reimage a system on the go.

Enterprise features also extend to collaboration and the machine is ‘Skype for Business’ certified thanks to a ‘world facing’ microphone and dedicated buttons on the keyboard for answering calls, hanging up and presenting. The microphone (which is located on the back of the display) can be used in ‘conference mode’ so everyone in the room can be heard or ‘individual mode’ where it cancels out unwanted noise. Or you can simply plug in a headset.

Battery life from the HP 3-cell 50 WHr Long Life Polymer battery is pretty decent, not least because the power demands from CPU and GPU are so low. The machine lasted 198 mins in the GPU and CPU hungry PC Mark test. Expect it to last significantly longer in less demanding workflows.

HP Fast Charge support means it can charge from 0 to 50% in 30 minutes, which is useful for a quick top up in a coffee shop. As you might expect, the 65W Smart AC Adapter is very small, weighing a mere 300g with a US plug.

The 14-inch mobile workstation used to be considered a companion product to a desktop workstation, to be used when away from the office. This is probably one of the reasons why the form factor has never really taken off, contributing to a very small proportion of mobile workstation sales over the years.

But the HP ZBook 14u G6 is different to those that have come before. It is powerful enough for most mainstream 3D CAD and BIM workflows but significantly smaller and lighter than your average 15-inch mobile workstation.

With tough competition from slimline 15-inch mobile workstations like the Dell Precision 5540, it’s unlikely to sell in huge numbers, but it promises to serve a niche market well. And for designers, engineers or architects who are frequently away from the office and place a huge value on portability, it’s an attractive machine for CAD on the go.