A workstation packing an incredible punch for real time viz, VR and GPU rendering but it’s also no slouch when comes to CPU intensive workflows

The CAD workstation has had a pretty standard template for some time now — high frequency quad core or six core CPU, mid-range pro GPU, 32GB of RAM and an SSD.

Of course, this spec is fluid and can be adjusted as required. For workflows that include real time viz or VR, for example, you’ll need a more powerful GPU; for quicker ray trace rendering, a CPU with more cores. And if you do both, a bigger investment in both areas.

With the rise of GPU rendering, however, things are starting to change. Firms can now put the lion’s share of their budget into the GPU to solve most of their computational demands and stick with a relatively cheap CPU.

This is all great in theory, providing your ray trace rendering software of choice runs on the GPU. But this still isn’t always the case. KeyShot, for example, one of the most popular amongst product designers, still only runs on the CPU (well, for the time being, at least, as it was recently demonstrated running on Nvidia GPUs).

Scan’s new 3XS WI4000 Viz workstation finds some middle ground, coupling the relatively low-cost eight core Intel Core i9 9900K CPU with the phenomenally powerful Nvidia Quadro RTX 4000 GPU. The result is an incredibly fast desktop workstation that can do pretty much most of what your average product designer will need for real time viz, VR and GPU rendering, and all for under £2,000. 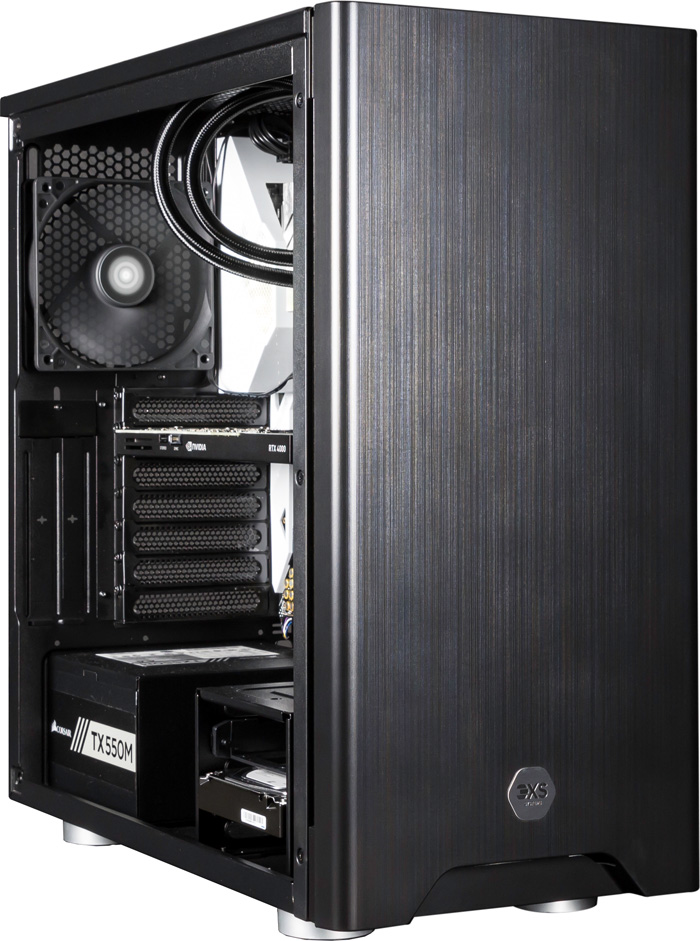 Until recently, eight core CPUs came at a big premium, but the new Intel Core i9 9900K delivers this spec for a very palatable £417, a mere £84 more than the CAD-standard six core Intel Core i7 8700K. Out of the box, the Core i9 9900K has a base frequency of 3.60 GHz and a Max Turbo of 5.0 GHz but Scan has applied its usual overclocking expertise to deliver all 8 cores at a phenomenal 4.90GHz.

For single threaded CAD and BIM applications it doesn’t get much faster than this. In SolidWorks, the machine felt lightning fast and it set a new record of 75 secs in our IGES export test. What’s more, it also impressed in our multi-threaded rendering benchmarks, completing our 4K KeyShot scene in 255 secs and the V-Ray benchmark in 60 secs. To provide some context, this is more than twice as fast as the Dell Precision 5820 we reviewed in June 2018, which had a quad core Intel Xeon W-2125 (4.0 GHz to 4.5GHz). This CAD focused workstation clocked 628 secs for KeyShot and 133 secs for V-Ray.

Scan’s overclocked Intel Core i9 9900K is still some way behind the 32-core AMD Threadripper 2990WX (116 secs for KeyShot and 27 secs for V-ray) but because it runs at 4.9GHz, it will absolutely trounce AMD’s monster CPU in single threaded workflows.

The star of the show 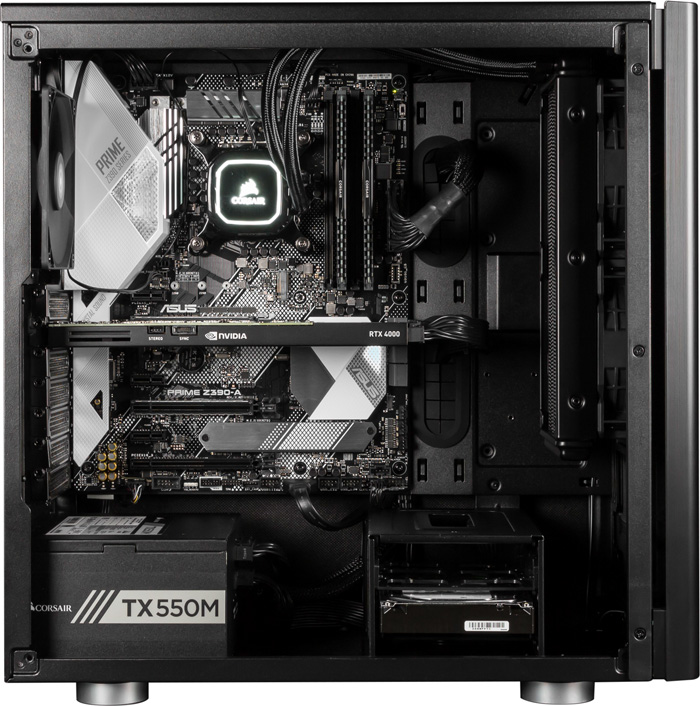 While the Scan 3XS WI4000 Viz is no slouch when it comes to CPU rendering, the star of the show is arguably the new Nvidia Quadro RTX 4000 GPU. We review this in detail here but the long and short of it is, it’s a phenomenally fast GPU for real time viz and VR. In terms of performance, we found it to be anywhere from 53% to 109% faster than the Quadro P4000 it replaces, which was an impressive GPU in its own right. But the icing on the cake is its performance in GPU renderers. In SolidWorks Visualize, for example, it delivered a very good quality 4K render in 278 secs. Then, when AI denoising was enabled, an equivalent image in a breath taking 49 secs.

This is faster than any other GPU we have tested, but the Quadro RTX does appear to be bottlenecked somewhat when using AI denoising in Solidworks Visualize 2019. For more details on this, check out our full review here.

Few would argue that the performance of this GPU is phenomenal, but it will get even better when RTX-enabled applications start to ship. If you haven’t considered GPU rendering before, now is definitely a good time.

The workstation itself is trademark Scan. It’s relatively quiet in operation, thanks to its dual-fan Corsair H100x hydrocooler, which needs to disperse even more heat than a standard non-overclocked 95W Intel Core i9 9900K would need to. Even after rendering in KeyShot for over an hour, it only produced a gentle hum, but the fans did rev up and down a little, which some may find annoying.

Everything is arranged really neatly inside. You get easy access to the single 2TB Seagate Barracuda Pro HDD, while there’s a 500GB Samsung 970 Evo Plus SSD hidden beneath an M.2 heatsink. A second M.2 SSD can be added, if required.

One of the nice features of the Asus Prime Z390-A motherboard is that it can support up to three PCIe x 16 GPUs, so if you really want to go hard on GPU rendering, simply add a couple of additional Quadro RTX 4000 GPUs, which cost £835 a piece. This configuration, however would need a more powerful PSU as the Corsair TX550M 80-Plus Gold is only rated at 550W. 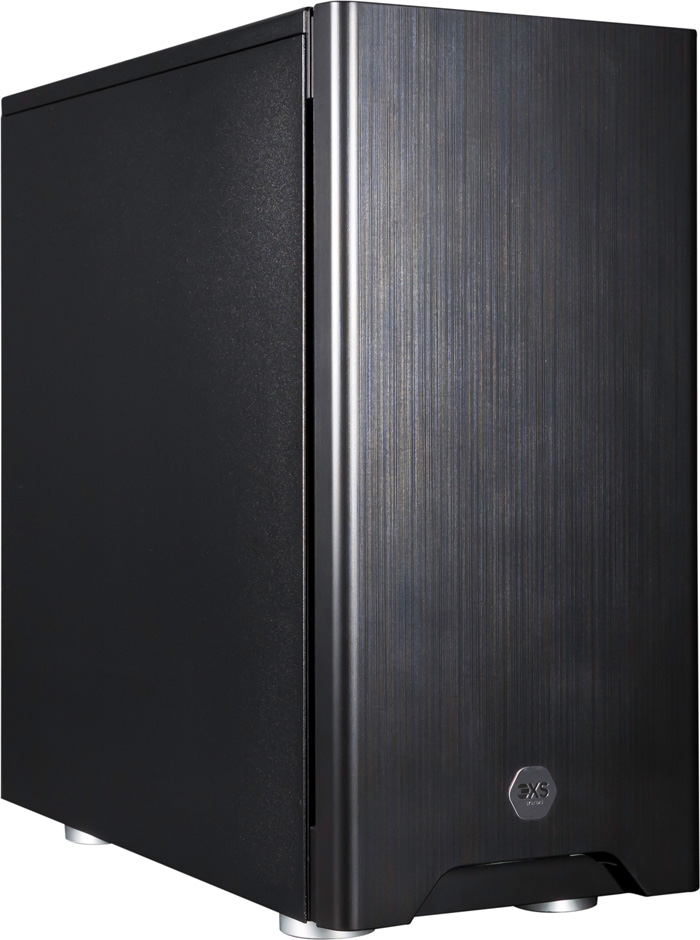 Overall, Scan has delivered an impressive new desktop workstation. It may have a mainstream, sub £2,000 price tag, but there’s nothing ordinary about the performance. What you can get out of the Quadro RTX 4000 GPU is quite phenomenal, but this machine also has plenty of grunt for CPU-centric workflows, both single and multi-threaded. In summary, it’s a fantastic all-round workstation that can handle many different viz workflows and one we’d highly recommend. 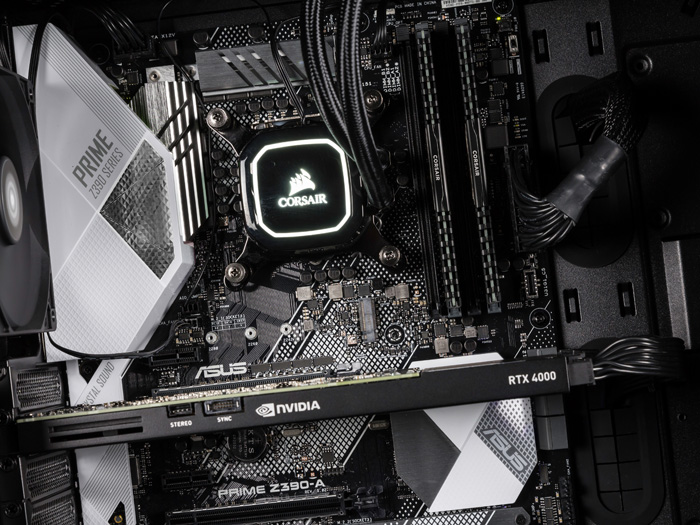 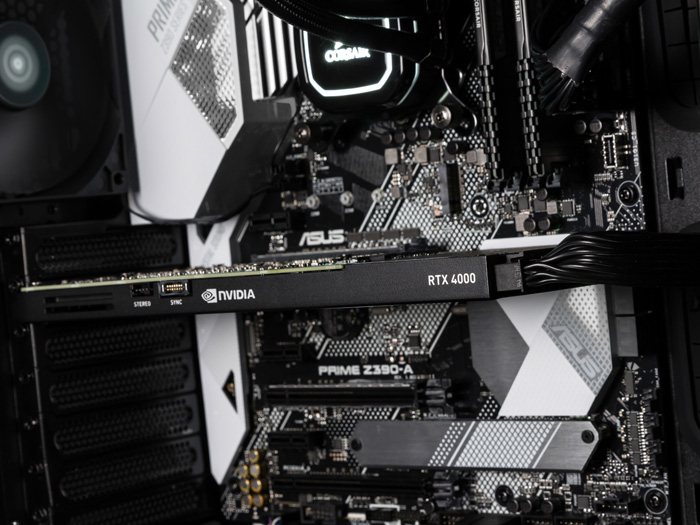