NBS’s latest development aims to bring the specification process out from its silo to benefit global team collaboration and provide a single source of truth, writes Martyn Day

It’s all in the name. Based in Newcastle upon Tyne, NBS has developed the National Building Specification for the last 40 years. As a commercial and development arm of the Royal Institute of British Architects (RIBA), NBS has established itself as a reliable source of reference tools which support the built environment, covering construction engineering services and landscape design. As the Industry progressed and adopted CAD, then moved to 3D and BIM, NBS has constantly updated its services to build on the advantages of information models.

For the last few years NBS has mainly been in the news for developing generic BIM libraries or parts (National BIM Library), bespoke BIM libraries for component manufacturers, an online viewer and defining its own quality standards for BIM objects, amongst many others. Most significantly, it won a competition for a million-pound contract from the Government to develop a national BIM toolkit to assist in the information development and delivery at each stage of the asset lifecycle for BIM Level 2 projects.

As a side note, since 2012, NBS has also carried out a handy survey, which tracks BIM adoption in the UK and is always worth a read to identify trends, or to rate your own company against the industry standard (tinyurl.com/NBS-BIM-report).

The latest innovation from NBS takes it firmly back to its roots and brings its specification services very much into the modern age. NBS Chorus is a collaborative specification platform built in the cloud, to support global design and construction projects in a way that has not been possible before.

Instead of the specifications being disconnected from the process, and stored in a host of heavily templated Word documents by specialists (as the industry typically works now), new processes, such as BIM, can now be connected with specification creation via NBS Chorus. It means the most up-to-date specification information is available to any project team member, anywhere, at any time. With specifications covering various design disciplines in a single system, Chorus was developed in its early stages with the aid of significant multidisciplinary industry players, including Mott MacDonald, Ryder Architecture and IBI Group.

With its historical investment in BIM specification content and its commitment to supporting multiple industry standards, NBS Chorus provides a thoroughly modern and SaaS (Software as a Service) front-end to distribute NBS’s constantly maintained and updated building specifications data, which is all authored to the ISO 12006-2 compliant Uniclass 2015 standard.

Last year NBS acquired Digicon, the dominant specification company in the Canadian market, which developed multiple specification products for CAD and BIM. The move gave some indication of where NBS was looking to expand to and since then, the company has committed to supporting Australian specification standards and practices in the not too distant future. It seems that the adoption of BIM in Commonwealth countries is picking up and they are looking to UK-derived BIM standards in a rush to get their construction industries more efficient and take full advantage of moving to BIM. With its new SaaS platform and investment in specification developers in other countries, NBS sees new territories providing additional growth for the future, with content and services becoming global and a dedication to provide for multiple standards and classifications, all served through a single on-line interface. 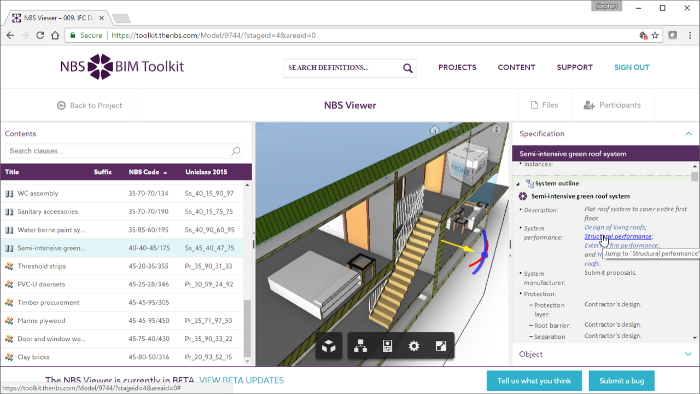 AEC magazine talked with Dr Stephen Hamil, Director Research and Innovation at NBS, about the advantages of this approach to providing specification via the cloud. He explained, “NBS Chorus has the potential to transform the way firms specify, by bringing the people that matter together in the same online space during specification phases. This means teams can work together in real-time using a single trusted source of the truth, which avoids the creation of unstructured content, and removes existing barriers to accessing specification data.

“We recognise that many firms these days work on global projects, while the teams may be spread out in different offices and time zones. NBS Chorus securely connects them, and provides permission-level locking to safely expand access to include clients, consultants and contractors. The data owner can allocate read-only or edit permissions based on each user’s need.”

One of the core problems with teamwork in BIM is lack of consistency and quality in the final documentation, Hamil explained the advantage of using a platform approach, “Applying a common classification system across a project, through deploying NBS Chorus to create a master specification, will result in BIM objects and specifications having a consistent structure, as they all have the same origin, regardless of which item in the project they describe, and regardless of which discipline or organisation generated the information.

“By bringing specifications inside the modelling tool, as opposed to viewing separate textual documents, it’s also now possible with Chorus to review specifications in the context of the model, which is a significant advantage and an even greater benefit for new collaborative working and will improve the final project documentation.”

Adopting the NBS Chorus service will represent a welcome change to the fractured way many firms create specifications today and development-wise, appears to be a very logical step for NBS to take. Looking at other features in Chorus, it also offers querying and reporting tools, enabling group-think solutions as well as ‘who did what & when’ accountability, together with the tracking of changes. This will be super powerful on large BIM projects when auditing data. It has the advantage of operating outside existing document management systems but for those that already use project hosting sites, NBS is also looking at possible integrations with key market players.

Chorus represents a significant investment in development work for NBS. However, looking at the cloud infrastructure it has created, Chorus appears to be a fundamental technology test case, which it needed to create to enable its next generation of 21st century solutions for multiple construction information and content problems. I suspect we’ll see other NB S content and services offerings running on the baseline architecture, together with providing a platform for developing future collaborative applications to BIM users.

While NBS is obviously a significant player in the UK, it has perhaps saturated that market, while other countries, just starting their BIM journeys, are looking to the UK for technologies processes and standards to quickly accelerate BIM adoption and usage. The cloud route obviously gets NBS content everywhere and it isn’t scared of acquiring or partnering with local specification developers. I suspect, through Chorus, NBS will become a significant exporter of BIM knowledge to early adopting countries, this is good news for a broad adoption of British standards, as well as for experienced British firms seeking overseas design and construction opportunities.

To deliver on this expansion NBS recently received a £31.8m investment from the private equity arm of Lloyds Banking Group. I suspect we will see more acquisitions and expansions into new BIM markets. NBS is planning a series of UK events to launch the service, in Manchester (2 October), Newcastle (4 October) and Edinburgh (10 October). More details can be found at thenbs. com/discover-events