120 Moorgate is a 14,540 sqm (GEA) retail/office-led, mixed use development located at the northern edge of the City of London.

Allies and Morrison is an architectural practice that has experienced tremendous success developing solutions for a wide range of high profile clients. For three years the company has been running its projects in 3D. Initially the team reviewed the 3D solutions on offer in the AEC space in relation to their needs as a very busy architectural business where time is always limited.

Their investigations revealed that there are tools marketed to increase design productivity, capture creativity and control supply chains. Those three requirements are crucial to Allies and Morrison and needed to be reflected in the evaluation process. It was also considered that a system based on a Building Information Model (BIM) would bring the advantages and benefits of the latest technology to their practice. Following a thorough evaluation they selected Gehry Technologies Digital Project software (DP) supplied in the UK by Desktop Engineering. 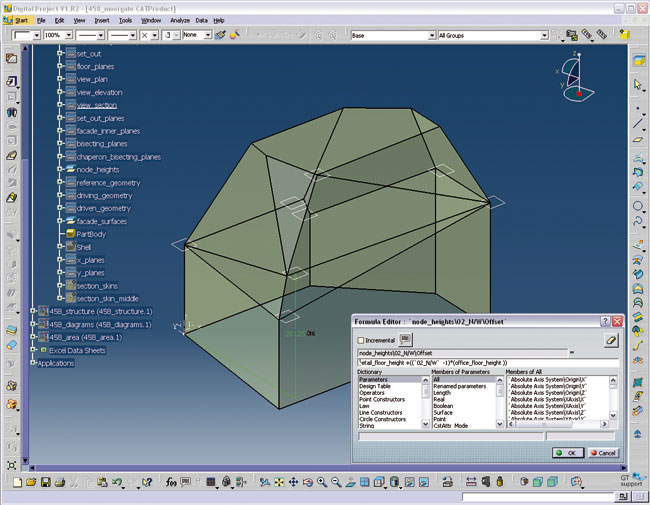 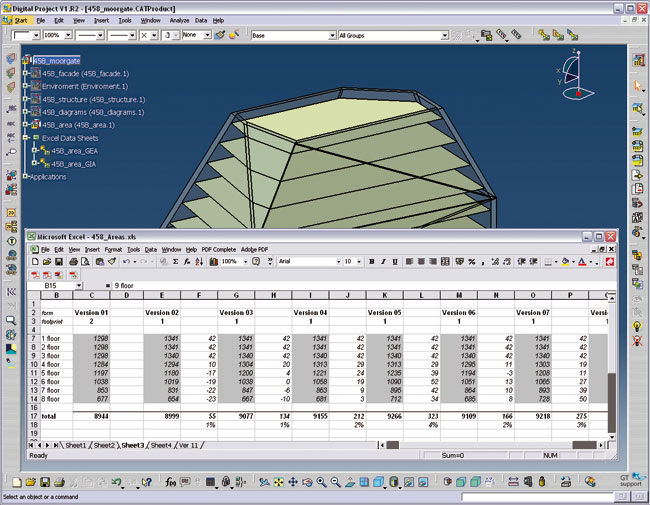 The ability to drive the design from an Excel spreadsheet is a real benefit for Allie and Morrison. 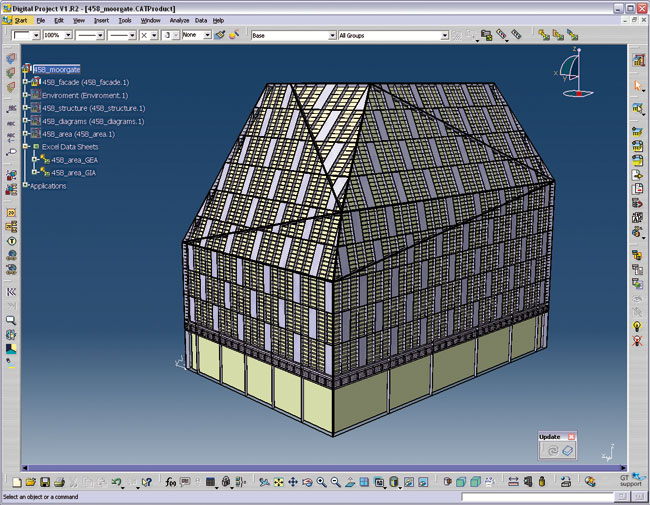 On 120 Moorgate Allies and Morrison were able to run 22 faíade iterations – in one day.

The initial evaluation process applied DP methodology to two buildings in London, 120 Moorgate and a mixed housing and retail development at Elephant and Castle. The architects wanted to consolidate their hard won knowledge on real cases. There is a sometimes-painful learning curve before real benefit derives from using DP, but once the system and its associated methodology is fully grasped the benefits are considerable.

" Once the initial digital model is built it is possible to write parametric rules for each element meaning that both minor and major changes can be made quickly with all associated data being amended in real time. "

The evaluation team found that the most satisfying aspects of using DP are the ability to iterate designs very quickly and generate reports automatically – these being updated as the design develops. Equally, the ability to change the design driven from MS excel spreadsheets is a real benefit. In practice, this allows the design team to alter gross areas and attribute relationships while automatically satisfying the reporting and design needs of developers, planners and other interested parties.

These software features are enabled through parametric algorithms that allow the coordinates of attributes to be maintained in relation to each other while designs iterate. This gives the advantage that features do not have to be re-designed to accommodate design changes because attributes effectively reposition themselves automatically.

The architects claim that the benefits of building a parametric 3D model are enormous, and the more the model is ÙriggedÝ with information the more benefits it delivers. Using DP enables simultaneous input from several disciplines and this is where the productivity gain starts because data on, for example, materials, planning, finance, manufacture and other factors can be added to the model before designs are complete.

Areas, plans, sections, and reports on angles, light and associated rights and compensation amounts, as well as other types of report can be generated to provide all stakeholders with the information that they need in the format that best suits them. This may be visual information in the form of rendered views, 2D output from the model or the most recent mathematic calculations related to the project as a whole.

The team claims that standard 3D architectural CAD software takes architects to a plateau where it is difficult to become more productive. But using DP and learning new skills it has become possible to introduce more efficient methodologies. Once the initial digital model is built it is possible to write parametric rules for each element meaning that both minor and major changes can be made quickly with all associated data being amended in real time. Further, reporting procedures traditionally slow down the design process; DPÝs automatic report generators speeds it up again. 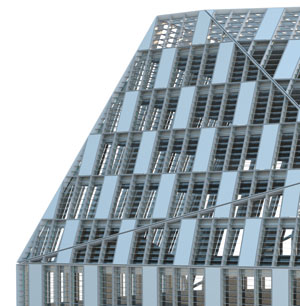 The company that supplied and installed DP to Allies and Morrison, Desktop Engineering, also provides training, support and an interface to Gehry Technologies, part of Frank GehryÝs practice. Managing Director Geoff Haines said, ýDP is based on the same core design to manufacture software, Dassault Systemes Catia, used by car and plane manufacturers including Boeing and Toyota. These companies use the most advanced design-to-manufacture software available, which Gehry Technologies continuously develops making it suitable for the AEC industry. This brings the proven benefits of large-scale design and manufacture software to architects, at an affordable price. The Building Information Model, BIM, is a complete set of data that includes 3D design and manufacturing information as well as associated rules, methods and knowledge that govern all aspects of a building or development.¯

The team at Allies and Morrison found that design intent is captured in DP as a series of rules that the software maintains and applies throughout the design process. This means that conceptual frameworks stay intact throughout the many changes that the design is subjected to, and that all the while, development targets are retained and optimised.

The 3D evaluation team also discovered that the design productivity that DP produces lead to greater flexibility and increased creativity because the software opens options that are not available from other less productive methodologies. It effectively provides new places to go, for example, the architects were able to run 22 faíade iterations on 120 Moorgate – in one day. Major changes were made with no loss of design intent and with full reportability throughout. This gave the team tremendous confidence to explore and improvise.

The introduction of DP in to Allies and MorrisonÝs methodology has enabled the architects to respond better to client and stakeholder needs and react to briefs with increased confidence and creativity; an example being that it has become possible to generate viable optimised and fully reported designs that it would be impossible to draw in anything other than DP. In other cases it has become possible to run cost versus aesthetic comparisons quickly and make better and more accurate decisions as a result.

While these benefits are accruing through the use of the parametric 3D digital model, others will be seen further down the line. DP has enhanced the teamÝs ability to communicate project status in terms that recipients need and can relate to. The same communication enhancement is available using data needed for manufacture with Numerically Controlled Machines or for generating file formats compliant with sub-contractorsÝ systems and other CAD programmes. Having seen the efficiencies that DP brings to the design and planning process the architects are looking forward to applying the manufacturing capability that DP carries over from the full Dassault Systemes Catia V5 PLM suite on which it is based.