We talked with UK technology solutions and services provider, Excitech about its experiences with customers, technology providers and getting firms up and running, away from their offices

“For practices that are in the region between 20 and 40 users, where they typically don’t have an IT manager, we are we are their IT manager,” explains Alan Stone, who heads up Excitech’s IT solutions business. “When it started to look like something was going to happen, we realised we had to change our response. So our first test was actually to initiate our own business continuity plan to remotely support our customers.

“We did this two weeks prior to the lockdown. Our support staff are based in Enfield [London] and suddenly we had to take that team and enable them to work remotely. Shortly after, we then started to get calls from customers asking for help.

“I’ve never known a couple of weeks like it, we had more than triple the number of calls. I’ve got a team of ten engineers, everyone had to work full time on the help desk and all leave was cancelled. Our customers were relying on us. It went from mid-March into April and we went from typical IT issues to moving them into a completely different way of working.”

Many of Excitech’s customers work in an office in front of a physical workstation, collaborating on data stored on a server on the local area network. When firms learnt that they would need to send staff home, most started looking at VPN, or remote desktop technologies like Splashtop.

“I would say 90% of our customers are doing that today,” says Stone. “Now, that had some challenges because some users didn’t even have a laptop or workstation at home. We then had a mad rush on orders for laptop devices.

“Typically, firms were buying the lowend workstations, just something to act as a dumb terminal to connect to their machine in the office, but everyone was buying laptops at that period, so you imagine in distribution the stock levels were hard to gauge. One minute laptops were in stock, gone the next! It was a real challenge for procurement in general.”

But it wasn’t just hardware that was the problem. Getting VPN licences generated was also a challenge, as Stone explains. “While all clients had a firewall device, they only probably ever had two or three users connected simultaneously. Now suddenly we’ve got 20, so VPN licences became critical. But the vendors were struggling with demand, so even just a generation of a licence within 24 hours became problematic due to the sheer volume, sometime taking 48 or 72 hours. It wasn’t just architects looking for this, it was the whole IT industry.”

Remoting in using TeamViewer and Splashtop worked to a degree, but it’s not 100%, says Stone. “Applications like Enscape require different protocols – OpenGL, for example – so we’ve had to then look at different methods of connecting. Where they might have had VPN and RDP to begin with, they now maybe using VPN and HP RGS (Remote Graphics Software) because it will support OpenGL.”

The sudden and very dramatic changes that firms had to make meant customers questioned most aspects of their IT setup. Do they move to workstation class laptops? Do they only use hosted data services? Do they still need such big offices? How can they be more dynamic both now and in the future?

“We are starting to see that whilst customers had hobbled together various solutions to help them keep working in the short term e.g. using Dropbox, Teams etc., they are now realising they need long-term solutions,” says Paul James, Excitech’s head of document management solutions. “Digital workflows are no longer a nice to have. You can’t print off documents and walk them round desks anymore, they need more permanent solutions in place.”

According to Stone, dozens of customers have utilised the free extended access programme for cloud-based collaboration tool Autodesk BIM 360. However, some firms still don’t want their data hosted on a public service and the experience has been heavily dependent on how the service has been accessed.

This has led to some firms investing in mobile workstations to use alongside BIM 360. It gives the flexibility of being able to access the model at home, or to take the workstation into the office. However, there is a cost element to consider. Many practices have already made significant investment in desktop workstations, so replacing these with mobile workstations will be expensive.

The same is true for cloud workstations, as Stone explains. “Once we start crunching numbers for desktop as a service (i.e. hosted virtual desktops) you can go and buy a high-end mobile workstation for a similar cost of a year’s service. Firms need to have those discussions internally, and weigh up the benefits vs cost of each approach.

“While we have remote desktop suppliers that can get you ‘desktop as a service’ in two hours, you can’t, because there’s still this one crucial problem, the model, where do customers put their data?”

Virtual Desktop Infrastructure (VDI) is another option, but while big architectural firms might already have had an agile working policy in place with pools of VDI desktops, for smaller practices it’s a major investment.

“VDI solutions are initially very investment heavy but the return is over a longer period,” says Stone. “Initial capital cost to deploy is very, very expensive.”

“Our advice is, whatever is right for your business,” he adds. 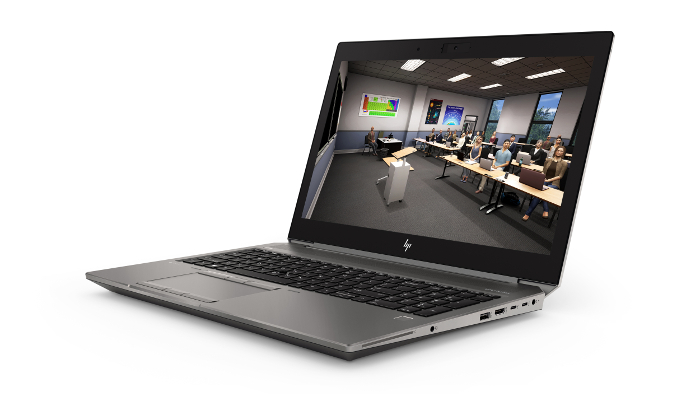 Clients accessing BIM 360 directly from their mobile workstations at home have had the best experience. Credit: HP ZBook 15

Uncertainly over future working environments is having a huge impact on technology decisions.

“Firms are not all going to be able to just go back to an office,” says Stone. “Firms don’t have the office space to implement a two-metre social distancing rule. It looks like firms might have to have half the staff in one day, the other half the other day.

“Speaking with our clients, what has surprised me is all are re-evaluating how they work moving forward, with a focus on allowing their staff to split their time between office and working from home,” says Martyn Stoneham, Excitech’s UK BIM 360 Specialist. “Some are even looking at whether they need all their offices/ office space. A lot of customers are seeing productivity increase and a better work life balance with staff saving hours not having to travel to and from work.”

“By saving on rent, they could invest in technology,” adds Stone.

Stone explains that there are already a couple of customers looking at long-term solutions which would involve reducing their office space in central London, “They are looking at Nutanix Frame as a service, alongside other technologies like Panzura for data, so if they still want to maintain an office environment, they’ve got the option. They’re running Panzura locally and in AWS or Azure, and still collaborating on that same data.”

This re-evaluation of office space and technology also applies to smaller firms, for whom BIM 360 does seem to have been a key technology. The fact that it could be turned on with the flick of a switch and was free for a number of months made it more appealing, but now firms have been using it for some time, it could well lead to a more permanent way of working.

Whichever technology route firms have taken to handle the challenges of working from home, they have all had to adapt quickly. “One of my clients commented around deploying Microsoft Teams, saying normally this would have taken months to deploy with a lot of push back,” says Stoneham. “As everyone had no choice, it took days, not months and with no push back. I would say this is also relevant with BIM 360 as normally one of the biggest challenges is adoption, as people don’t like change. I can honestly say no one has mentioned this as a challenge anymore. It’s amazing what you can do when you don’t have any other option.”