The World Green Centre in Santiago, Chile, was designed as the antithesis to an ordinary, urban city office block, freeing up 12,000m2 of parkland.

The initial brief was to build four office towers of 15,000m2 each, although cCe architects partner and founder, Cristobal Correa Ehlers, had a creative solution:

“Our proposal was to put those four towers together in one building, creating a footprint with a ‘U’ shape, which generated a ‘public green park’ in its interior.”

On the roof of the building cCe proposed a 5,000m2 terrace with trees and gardens that reduce the heat and mean 100% of the site is, on different levels, green land.

“We considered the ‘unused’ space by the buildings as public space, owned by everyone, and therefore becoming a contribution to the city,” said Mr Ehlers.

After winning an initial competition, the brief become broader, with the developers adding an art gallery, restaurants and public infrastructure surrounding the park.

As a result cCe’s visualisation team had to rethink how the images could show all of the green spaces, and how public and workers alike could interact with them.

The project evolved during the design development with the visualisation models being influential in considering final materials and cladding systems. Passive design is incorporated within the faade, which reduces solar radiation and minimises the energy used for air conditioning.

Bentley MicroStation and ArchiCAD were used to build the architectural models, while 3ds Max delivered the renders, with post processing work done in Photoshop to add to the final atmosphere.

“We intend for this office building to become a reference for a new way to design sustainable buildings in Chile, which takes into consideration energy efficiency, embodies the final user experience, providing quality public spaces and interior areas with the best environmental conditions,” Mr Ehlers said.

The marketing of London properties abroad is a highly competitive business as more international investors look to plough their money into high quality British bricks and mortar.

In a market where buyers are unlikely to ever set foot across the doorway, design visualisations are key to making sales. 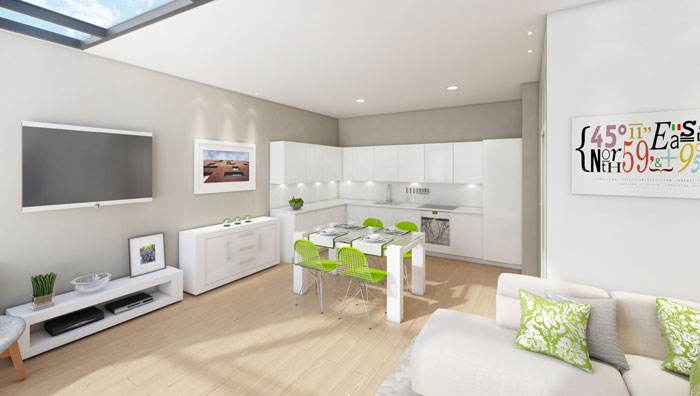 Gazzano interiors: CGI and architectural photography studio Dowling Jones & Stone used Vray 2 and RP Manager for set up of the render passes; and Photoshop and Lightroom for the post edit

When Anglo Education, a provider of student accommodation, looked to refurbish and market the Gazzano apartments in the City of London it turned to CGI and architectural photography studio Dowling Jones & Stone (DJS).

Internal images were developed over a two-week period, allowing for some consultation over finishes and furniture. The final look and feel was subject to change, so the designers had to be flexible.

In a joint team effort a lead modeller ensured all details were correct and the model was produced quickly and efficiently, matching 2D CAD information and liaising with the architect over any queries.

Another modeller concentrated on 3D model content, such as furniture and materials, which were often sourced from DJS’s library but bespoke items were made too.

Partners and co-founders Gregg Stone and Paul Jones worked on the render and post edit of the images, incorporating final changes.

The building refurbishment was significant and CAD information in some areas was incomplete so had to be backed up with sketches and supporting reference.

The team worked with the developer to piece together the information and created mood boards to show furnishing styles, based on previous work the developer had completed.

Furniture was added to the 3D shell of the building, modelled in 3ds Max, while regular consultations with the developers meant view angles could be signed off along with the furniture position and style.

Final images were developed using Vray 2 and RP Manager for set up of the render passes; and Photoshop and Lightroom for the post edit.