For the design of SingaporeÝs Marina Bay Sands Development, Rhino, the NURBS-based modeller, was used to maintain the entire project in a single 3D master model. By Brett Duesing, Strategic Reach.

Sometimes, aesthetics and execution come together to pay off big. In May of 2006, the architectural firm of Moshe Safdie and Associates won the biggest design competition in its history. The city of Singapore had selected the firmÝs design proposal for its very first casino, the Marina Bay Sands integrated resort.

ýBig¯ may be too small a word for the award. ýThis is a very large project. ItÝs essentially a city,¯ explains designer Jaron Lubin, who was part of the design process from the beginning. The Marina Bay Sands development will spread across a six million square-foot footprint, containing casinos and hotels, a 54,000-capacity convention centre, an Art/Science museum, a mall, two large theatres, and six signature restaurants. When the resort opens in 2009, the operation will employ an estimated 10,000 people. According to official reports, the budget for construction of the international entertainment mecca tops out around ú2 billion.

For any firm, winning a bid that big is a jackpot. Since the acceptance of the proposal, Moshe Safdie & Associates has doubled the size of its staff in its Somerville, Massachusetts office.

ýThe key to using Rhino for us was that there was such an easy exchange between other software platforms, so we could have many modes of simultaneous production.¯

To ensure the on-time delivery of the massive submission and to keep track of all the design output, the team tried a somewhat different approach to project management. The designersÝ strategy was to maintain the entire project in a 3D master model. ýWe started to develop our 3D models right away,¯ Lubin explains. The projectÝs general forms were modelled in a product design software called Rhinoceros. ýHalfway through the competition phase, we had still maintained a coordinated 3D model. This allowed for an easy translation to 2D formats.¯

The Rhinoceros modeller is a favourite 3D design generator for industrial art projects large and small because of its powerful NURBS engine, which allows designers to easily create intricate curves, organic surfaces, and sculpted textures. Curvilinear elements like these can be seen as a unifying motif throughout the Marina Bay Sands interior and exterior designs.

For the team at Moshe Safdie & Associates, Rhino gave the additional advantage of flexible export, which could convert all the curved shapes faithfully to other 3D and CAD-related formats. ýThe key to using Rhino for us was that there was such an easy exchange between other software platforms, so we could have many modes of simultaneous production. This enabled our competition team to act more efficiently and create a higher quality product in the end,¯ says Lubin.

From the 3D master model, sections of the design were exported to whichever software was most appropriate for the task: to develop further details, analyse the structures, and prepare the final visual presentation in the form of renderings and physical models. For instance, the master model exported the basic linework for 2D base plans, sections, and elevations. From there, other designers could further develop details using AutoCAD, Adobe Illustrator and Photoshop.

The firm relied on several outside parties for consultation on structural engineering and wind simulation, and for professional rendering services to create the final photorealistic images. Analysts received DXF exports of the master model to be used in their own 3D systems. The 3D model in its entirety was sent to the rendering and animation firms through a special NPower plugin, which converts 3D data from the Rhino modeller to 3ds Max. 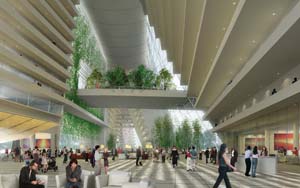 While the outside firms rendered the Marina Bay Sands complex into the backdrop of the Singapore skyline, Moshe Safdie & AssociatesÝ in-house model shop cut all the scale model parts. Here the team extracted STL files to create 3D components through a Z Corp rapid prototyping printer and automated 3-axis CNC mill. The master model also exported 2D outlines that were made compatible with the model shopÝs laser cutter by utilising a multitude of widely available plug-ins and scripts.

ýThe trend is that more people are using 3D programs like Rhino to link the 2D work from the 3D model so that there is less redundancy in re-drawing what has already been made,¯ says Lubin. ýThe 3D work generates the 2D work, and vice versa. We tried to do that as much as possible on Marina Bay Sands. Given the fast track of the project and the amount of models that were required for the competition, we developed techniques to take advantage in this way. We reduced redundancy and kept things tightly managed through a central model.¯

The extra detail required for the contest submission led to a much more comprehensive initial design, one which pleased the Singapore officials to such a degree that they have accepted the results of the competition phase as the official guidelines for future development. ýBecause of the timeline, there will likely be minimal aesthetic changes between the submitted design and the final product,¯ Lubin surmises.

After a brief celebration of on May 26, the day the architectural jackpot was announced, the staff of Moshe Safdie & Associates prepared itself for more work ± about three years more work ± to make the Marina Bay Sands a reality.

ýEverybody has been really excited about this project and what it means for the office,¯ says Lubin. ýIt has set a high standard for all the work that weÝre doing, and weÝve been very happy with the output.¯