Dual processor workstations have been around for a number of years, but what do they offer the average CAD user? Greg Corke takes a closer look at multithreaded applications and multi-tasking on Intel’s Xeon and AMD’s Opteron processors.

There has been a lot of talk about dual processor workstations at AEC Magazine over the past few months. As there still aren’t many multithreaded CAD applications, which can take advantage of a second processor, it’s hard to measure the immediate benefits. However one multi-threaded application that can benefit from two processors is 3ds max, which is used extensively in the AEC sector for project visualisation.

3ds max has been written so that certain operations can be spread across both processors, which means that dual processor workstations will outperform single processor systems under certain compute intensive operations – when rendering a 3D scene, for example.

To put this theory into practice we have introduced a new 3ds max benchmark this month, which records how long it takes to render a typical 3D scene. We tested two dual processor workstations – a dual AMD Opteron from Delcam, and a dual Intel Xeon from RM – and compared them to the results obtained from a standard single processor system. But first a little background on the machines.

RM’s dual Xeon features two 3.6GHz processors, 2GB DDR2 memory, a top of the range ATI FireGL V7100 graphics card, a single 300GB Maxtor Serial ATA hard drive, and a DVD combo, all built around a motherboard, which RM co-developed with ASUS. With such as high-end specification it was surprising to see that RM had not opted for a ‘performance’ Raid 0 hard drive setup, or even Raid 1 for fault tolerance, but both are available as options. 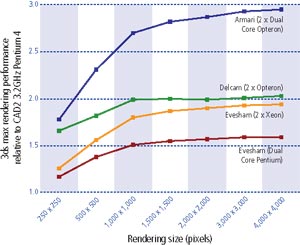 With all this technology in such a small space you’d expect a fair amount of heat to be produced, and some serious fans to dissipate it. Surprisingly the machine is virtually silent throughout most operations, but when the fans do kick in during some compute intensive operations, you (and the rest of the office) do know about it!

Both dual processor machines delivered virtually identical results under our 3ds max rendering benchmark and were around 20% faster than a single 3.6GHz Pentium 4 workstation, demonstrating the benefits of running multi-threaded applications on dual processor systems.

Our previous tests on Opteron have shown that AMD’s processor performs impressively when it comes to number crunching tasks, but we didn’t expect the two 2.0GHz processors (Opteron is currently available up to 2.6GHz) to match Intel’s flagship 3.6GHz desktop processors under our 3ds max benchmark.

While these results will be of great interest to those seeking ultimate performance under multi-threaded applications, there are many more benefits to dual processor systems. Anyone involved in analysis, or visualisation (rendering) will also notice immediate benefits if they are trying to make their workstation do two things at once. While one processor is busy crunching away, the other processor can still be used for modelling or setting up further studies. Try doing the same on a single processor machine and your system is likely to grind to a halt – though technologies like Intel’s hyperthreading, which is designed to make a single chip operate like two separate devices, can go some way to overcoming the bottleneck.

To illustrate the benefits of concurrent processing on dual processor systems we tested both workstations by running two individual CPU intensive benchmarks at the same time. We were very impressed to see that the Opteron’s dual processor architecture enabled us to do this with virtually no performance loss, with the dual Xeon not far behind.

There are two types of users that will benefit most from dual processor systems: those that use multi-threaded applications and those that frequently carry out concurrent computationally intensive operations. While both the RM and Delcam workstations will satisfy the requirements of these users, each system also holds its own appeal.

With its high-end ATI FireGL V7100 graphics card, RM’s dual Xeon is likely to be coveted by those in visualisation, such as users of 3ds max. Here, the graphics card can work in either OpenGL or Direct 3D mode to provide impressive 3D performance when it comes to manipulating large models on screen. In addition, there is also plenty of room for expansion, so users can add additional hard drives, or upgrade the memory at a later date, possibly to take advantage of the forthcoming Windows XP 64-bit edition. This OS will be able to address up to 4GB RAM when running 32-bit applications (compared to the 3GB limit currently imposed by the current 32-bit version of Windows XP Professional). However, the machine we had on review had actually filled all of its four memory banks so it’s always a good idea to ask for 2 x 1GB modules if future expansion is likely.

Delcam’s SFF dual Opteron, on the other hand, is more limited in the 3D graphics department. Its AGP-based Nvidia Quadro FX 500 is a good solid performer but is likely to reach its limits under more demanding 3D applications. Still, the entry-level specification of the FX 500 is reflected in the price, which is relatively inexpensive for a dual processor system. The attractive price tag of ú2,200 is also down to the lower specification processors.

While the 2.0GHz Opterons don’t make Delcam’s workstation a slouch by any stretch of the imagination, we would expect two 2.6GHz CPUs to really show the true potential of AMD’s Opteron, but you’re likely to pay a premium for this pleasure of course.

Despite the availability of dual processor workstations for many years now, the CAD market has never fully embraced multi-threaded technology into its software development. However, with dual-core microprocessors – which contain two processor cores on a single piece of silicon, giving workstations improved multitasking capabilities – due for launch later this year we should finally start to see more multithreaded applications emerge in the CAD market, and of course higher levels of performance.