The Royal Navy Submarine Museum, based in Gosport, Hampshire, preserves and promotes the history of this important part of the fleet. The museum recently acquired a new wing to house the historic X-craft mini-submarine HMSX24 as well as accommodating information areas, a reception, lecture/corporate entertainment area and a ÙSubmarine and SciencesÝ gallery.

Located opposite another iconic structure – The Spinnaker Tower – the project was high profile and formed part of a ú3.1 million major expansion of the museum, which included a Heritage Lottery Fund award of nearly ú2 million. The new John Fieldhouse Building is named after the late Admiral of the Fleet, Lord John Fieldhouse of Gosport ± the most senior submariner in history.

This Advance Steel project provided its own unique set of challenges, and once the architect and engineerÝs design was viewed it was up to Hawk Structures, a structural steelwork company, with Design & Build capabilities, to ensure the steel structure delivered on all fronts.

The first challenge in detailing the structural steelwork for the museum was the shape, which was designed to mimic the form of a submarine, including a conning tower. John Bennett, Advance Steel CAD Manager of Hawk Structures was tasked with detailing the steelwork, and brought his experience from working on similar structures using 3D models, as well as his Advance Steel expertise to bear on the project. 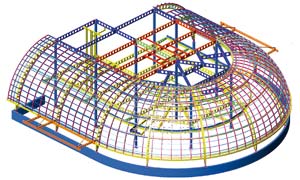 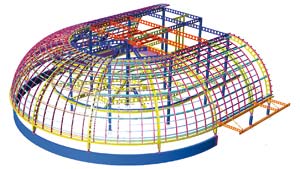 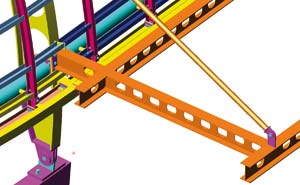 From the engineerÝs conceptual drawings, the first task was to develop a model of the main structure in Advance Steel. This would help anticipate any problems and prove the concept. With a curved structure such as this the outer skin steelwork must be bent in two directions, so to achieve the correct shape John twisted and rotated each of the twenty building ribs at its own angle. The model was numbered for drawing production, with any changes to it also automatically updating the drawings themselves. When John required help he was able to contact the Advance Steel product experts at CADS, the UK reseller of Advance Steel, who provided tips on working with curve generation amongst other items. Three separate plates were made for the main beams, to allow for either in-house, or as eventually chosen, Fabsec beams. However, the curved beams were eventually supplied by Barnshaw.

The interior specification added some very precise requirements, including creating the impression of a submarine interior. Using curved cellular style beams the architect and engineer had created the ribs and tubular look associated with a submarine. Whilst using cellular beams was not innovative in itself, the fact they needed to be a decorative feature and bent to a steep curve required a new approach. Therefore, rather than use an existing cellular beam, heavier standard universal beams were rolled and formed, with holes profiled and cut by Barnshaw to mimic a cellular beam. Firstly, the apertures were spaced for the best aesthetic effect, ensuring that when constructed the holes looked uniform, regardless of the impact of other structural connections and interior items. These adapted universal beams then needed to be bent beyond the known tolerances of existing cellular beams, without any distortion or kinking of the apertures.

The secondary structure (outer skin) presented more challenges, driven by the clientÝs exacting requirements. This consisted of a base of marine ply nailed to the steel framework, then foam insulation with metal cladding on the outside. A glass wall also runs around approximately two thirds of the side of the building. Special details at the end of beams and weld details were all incorporated in the final solution, with items such as individual stainless steel pins drawn in to the model. The outer skin had approximately 800 pieces that had to be put in by hand.

The Royal Navy Submarine MuseumÝs new John Fieldhouse Building was formally opened by Her Royal Highness The Princess Royal in 2005. Before unveiling a plaque to mark the official opening, The Princess Royal described the building as a ývery fine memorial to a great man¯.

Hawk bought AutoCAD and Advance Steel in March 2000, before which material lists were all manually written. The Royal Navy submarine Museum project highlighted a number of important advantages for Hawk Structures about Advance Steel. One of these was the ease with which information can be extracted from the model and imported into an Excel document to aid project management. This was not the case with the management functions of other rival software they were aware of.

CADS continue to provide expert help via its Support team including recent guidance for Hawk to bring its manual material list system together with its models, enabling a material list to be rapidly created. Hawk Structures has leveraged the experience gained on the Royal Navy Submarine Museum. The company now operate four Advance Steel licences and is able to tender for sophisticated projects that go well beyond your average portal frame.

Hawk Structures Technical Director, John Salter commented ýChoosing and training our draftsmen for Advance Steel was all the easier because of previous AutoCAD experience and/or attendance at a local training college combined with using AutoCAD on the job.¯ HawkÝs detailers have received AutoCAD and Advance Steel training from CADS, both on site and at CADS Broadstone headquarters. ýTraining is essential¯, says John Salter, ýwithout it we simply would not have made the progress necessary to achieve a return on our investment. After each CADS course our detailers returned to their work with more knowledge and expertise and renewed enthusiasm.¯