This month saw Autodesk release the first version of its AutoCAD-based Civil 3D 2005. Facing established competition, it seems Autodesk knew it had to bring a mature product to market. 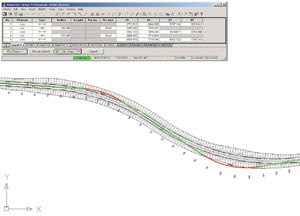 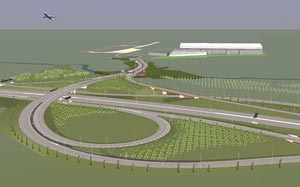 Terminal 5 road system model and a VR representation of a NovaPoint motorway model.

While Autodesk’s AutoCAD is and has been the ubiquitous 2D drawing tool, there are some markets that Autodesk has left rather late to develop tailored solutions for. The two that come immediately to mind are Process Plant and Civil Engineering. In the past Autodesk relied on third party developers to create these applications on top of AutoCAD, but since R13, the company has established vertical products of its own, usually buying the biggest developer in that market area: AEC, MCAD, mapping etc. Autodesk passed up the chance to buy Rebis (process plant) but bought US developer Softdesk for its AEC and Civils-based applications. Softdesk’s AEC products morphed into Architectural Desktop and has been sold globally, however, Autodesk’s Civil products have been split between Land Development Desktop (LDD), Autodesk Survey, Autodesk Civil Design (which sits on LDD) and AutoCAD Map.

Autodesk has now released Civil 3D, which is based on AutoCAD Map 3D and will eventually replace LDD and Civil Design. However, as of yet, not all the functionality has been added to Civil 3D (you can’t import survey data into Civils 3D), so the complete suite of Civils-related products numbers five, each with its own speciality and in some cases, overlap. I have to admit that Autodesk’s Civil product range is actually all very confusing at the moment, especially when you add to that the differences between AutoCAD Map and AutoCAD Map 3D! I guess this will come clearer over time.

At this month’s launch, if taking a look at the capabilities of AutoCAD Civil 3D, Land Development Desktop and AutoCAD Map 3D weren’t enough, Autodesk shared the platform with one of its biggest European developers, ViaNova IT from Sweden. ViaNovaIT develops integrated, civil engineering design and construction software with a strong emphasis on infrastructure design. The company’s NovaPoint product is developed to run on Autodesk Map and is used by road, railway, public works departments, consultants and universities in Europe and Asia. The demonstration showed how a 3D project could be started in AutoCAD Civil 3D and moved about the Autodesk Civil and mapping applications, together with the Novapoint solution to provide a seamless environment for Civil design, even including virtual reality for analysis of roadways.

Civil 3D is designed to assist in the creation and analysis of civil structures such as; waste matter drain systems, complex grading scenarios and roads, quickly providing interactive plan, profile, and sectional views. The product has been developed through extensive use of the AutoCAD ARX programming language and creates ‘intelligent’ objects that interact with one another as the model is edited.

Points and Surfaces: Civil 3D can create points using a variety of creation methods and collect points in logical groups based on advanced criteria. Civil 3D is equipped with a robust description key mechanism and can import or export including custom formats, MDB, and LandXML. Users can store and retrieve points from a project for collaborative engineering.

Complex Corridor Modelling; Corridor modelling is used to design model lanes, grading, side slopes, ditches, medians, and barriers to model complex roadway corridor designs. Changes made to the model-based design are dynamically updated and seen in the model, which improves design iteration time and directly affects the billable hours the engineers spend on the design. The corridor model also generates geometry, terrain models, site volumes, and visualisation, which allows engineers to get crucial data from designs quickly and easily.

I have to admit that Autodesk’s Civil product range is actually all very confusing at the moment, especially when you add to that the differences between AutoCAD Map and AutoCAD Map 3D! I guess this will come clearer over time

Novapoint is a modular system, which currently has 17 modules to chose from, covering everything from railway gantry design to vehicle path analysis and bore data. As it is based on AutoCAD Map, it’s also possible to bring in GIS-based data to be used within the Civil project. The demonstration given, showed a bypass road being created in AutoCAD Civil 3D, with all the cuttings (automatically planned and sectioned), then passed onto Map, where the Novapoint software was used to add in a roundabout, and analysed for large lorry vehicle paths. The model was then updated in Civil 3D, to include a ‘non-compliant’ design (the software did warn that this was the case but was overridden for the purpose of the demonstration). This was loaded back into Map/Novapoint where analysis and a Virtual Reality drive through identified the problem.

I have to admit that the demonstration was very impressive. While in the past Autodesk software had trouble handing this complex ‘proxy’ objects between the vertical variants of AutoCAD, the company seems to have cracked that problem. What might be a tad more difficult to crack is the market’s adoption of other products such as Infasoft (was Moss but now owned by Bentley Systems). Autodesk big selling point is the suite of AutoCAD-based applications and excellent developments built-on top such as Novapoint. Customers that already use AutoCAD may well be tempted to see what this new offering provides, especially as Infrasoft has been bought by Bentley Systems, which hasn’t been particularly pushing the software or the brand since the acquisition, and may have difficulty developing it further on the AutoCAD platform as every twin-platform (AutoCAD and MicroStation) developer they buy seems to be ‘de-authorised’ by Autodesk.