Project Soane challenged leading visualisation experts to bring Sir John Soane’s Bank of England back to life. Stephen Holmes spoke to some of the winning entries to find out how they created such lifelike scenes using a range of rendering tools, including Chaos Group’s V-Ray

Admirers of Sir John Soane’s ability to manipulate daylight within his buildings, Hoare Lea’s entry to the contest revolved around the Bank’s enormous domed skylight and clerestory windows.

“We were fascinated by his obsession with bringing natural light into spaces – and therefore decided to 3D visualise the space in Virtual Reality to showcase, as accurately as possible, how it would look if it still existed today,” says Karam Bhamra, executive CGI designer, Hoare Lea.

The Bank’s Consols Transfer Office is shown illuminated over the winter solstice (21 December) when the sun is at its lowest point in the UK. “There is also a gorgeous change in the colour temperature of the light entering the building, where it is very warm (yellow) as the sun rises, shifting to a cool (blue) as we reach midday, and then back to the warm hues as the dusk skies arrive in the late afternoon,” says Bhamra.

When it reaches the dusk setting the VR scene ‘switches the lights on’ to demonstrate what a modern lighting scheme at night might look like.

The bulk of the modelling was carried out in 3ds Max and rendered using V-ray to gain the physical accuracy of light-raytracing with photometric sources, while being geographically accurate to allow for realism in the specific solstice lighting.

Once the scene was ready the team switched to Unity 3D to create the VR user experience with interactive controls.

Due to the nature of the project there was less post production involved than with a straightforward image, however there was still some contrast tweaking and slight sharpening of details.

“We always limit the amount of post-production work we do when it comes specifically to modifying lighting levels – so often the architectural visualisations we come across in the industry seem to have lots of extra ‘studio style’ light pumped into scenes to brighten them up and make sure everything is uniformly lit and clearly visible.

“But this gives a false impression of how the space would look in the real-world, which to us makes no sense. Why do this if the point of visualising the design process is to see how it’s actually going to look? The software used these days allows visualisers to enter physical properties for materials, lighting and camera setup, so as long as the artist is skilled in using these ‘tools’ the renders can be astonishingly close to the real thing.”

Five people worked on the Project Soane entry in some capacity, with a dedicated Daylighting team carrying out calculations for verification and designing the artificial lighting scheme for the evening mode that helped clinch it the overall runners-up prize. 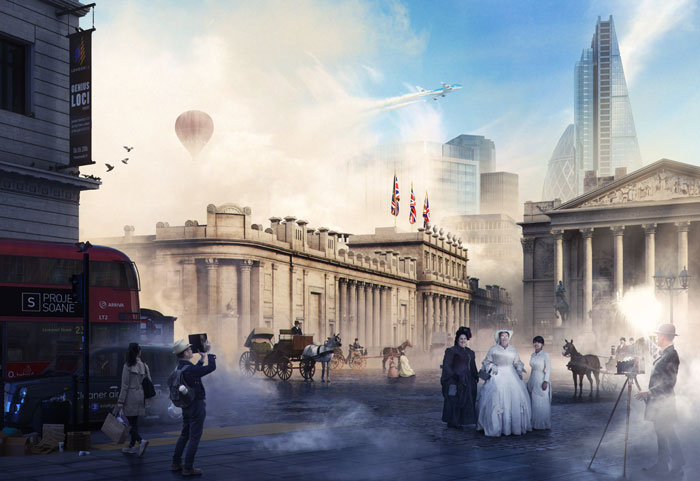 The history of London is captured in its buildings, and the Bank of England has stood staunchly on its current site on Threadneedle Street since 1734.

The entry from visualisation specialist Bartosz Domiczek emphasises this link to the past through the structure, merging elements of different times in one vibrant city.

Titled ‘Genius Loci’ (the pervading spirit of a place), the street scene blends late 19th Century pedestrians with the City’s contemporary skyline, the Bank forming an ever present feature in connecting the two eras in the lenses of the photographers placed in the scene.

An architect and CG artist with over 6 years’ experience working in Denmark and Poland, as well as freelancing around the world, Domiczek is a graduate of the Silesian University of Technologies.

This scene was built in Autodesk 3ds Max and V-ray, his tools of choice, fitting into his usual workflow. “I’m accustomed to its features, along with a bunch of useful plugins,” he explains. “Thus my work can proceed smoothly and I may focus on more artistic aspects.”

The lighting helps separate the modern and retrospective parts of the scene. It is achieved by a blue to orange gradient of colours, and the play between shades as well as the smoke.

“The light is to partially evoke the feeling of an old photography or a painting and blend this impression into a contemporary street view,” says Domiczek.

“I always try to achieve as much as possible in 3D. However, in this scene I decided to use 2D people since I needed very specific ones, regarding their costumes and appearances.”

Once the scene was rendered in 3D, intricate postproduction was undertaken to capture the different smokes and fog, so as to give Domiczek more freedom when fitting them into the scene.

With some assistance from a sole colleague, typical colour correction, contrast tweaks and plays with render passes were completed, with the final image awarded an honourable mention in the Project Soane contest. 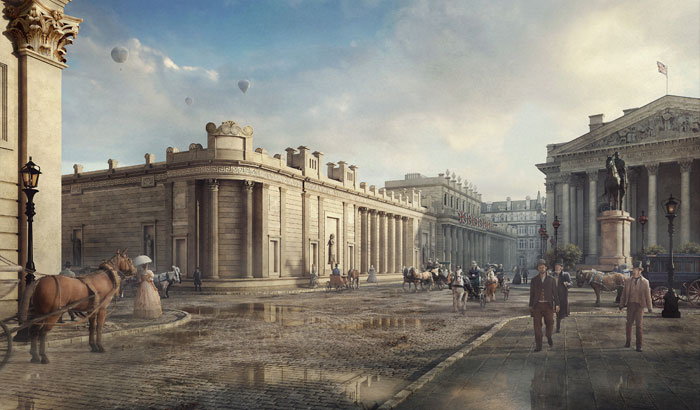 Influenced by a contemporary of Bank of England architect John Soanes, London-based visualisation experts Glass Canvas’ entry imagines the Bank’s iconic Tivoli Corner much as artist Joseph Gandy might have captured it.

Incorporating a composition, atmosphere and painterly feel sympathetic to Gandy’s style in his original 19th Century paintings of the structure, the camera is placed at a distance, capturing the building in its entirety, with neighbouring buildings and clearly defined streets evoking the urban Victorian landscape.

“As compositional rules I used the golden rectangle and the golden spiral, applying them for setting the camera angle and later for placing people and carriages in the scene,” says the project’s visualiser, Mihail Bila.

First, daylight was accurately modelled, with the only time day when any of the two facades captured in the scene would receive direct light calculated at around 7am.

A low sun HDRI, casting soft shadows to emphasise the beautiful Neo-Classical architecture was added, and clouds to frame and enhance the composition.

After mixing the render elements, puddles were painted onto the scene. “This can be achieved by using the RawReflection element; however, an even better way to do it is by doing a new render of the street with a highly reflective material,” explains Bila. “After the render was finished, I included it as a new layer on top of the others, made it invisible by placing a black mask on top of it and started painting puddles here and there with an oval-shaped soft brush.”

The masks ensured layers were kept intact while changing the position of the puddles so that it could contribute to the atmosphere and composition.

Bila even added fine detail such as more diffused reflections at the drying edges of puddles.

Adding population to the scene formed an integral point, as in the period it is set in this would have been a very crowded area. 2D images were used,

with the exception of the horse and the carriage in the foreground. With the composition complete, atmosphere, depth and realism were added to the scene, with fading colours, intensity to fog, smoke from chimneys and dust around the wheels of the carriages.

“For this particular image I decided to apply a subtle teal and orange effect, in order to emphasise the unique morning light and maybe evoke the dramatic colours of Gandy’s paintings,” says Bila, who, having used various colour lookups at a very low opacity level, tweaked the various layer Levels.

For the final touches the vignette effect was emphasised and exposure increased to areas in direct sunlight, making the entry as atmospherically lit as one of Gandy’s finest works, and placing it among the competition’s top entries.

To see all of the other winners of the Project Soane rendering competition, sponsored by HP and Nvidia, visit www.projectsoane.com 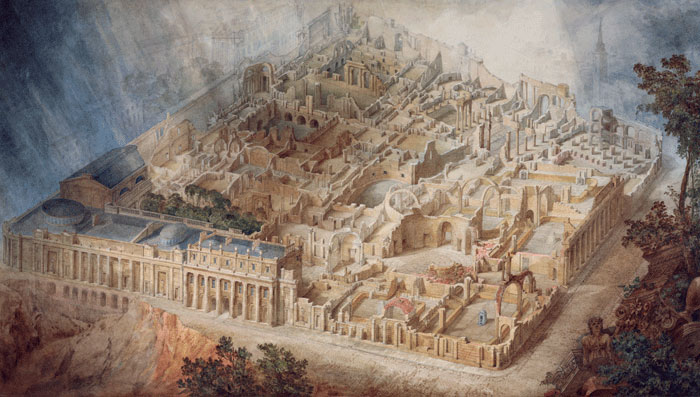