HP now offers eight different mobile workstations, by far the most of any OEM

In addition, the IT giant has updated all of its current ZBook models, with the new ‘G5’ editions featuring new CNC machined aluminium alloy chassis, better security, new Intel CPUs (including models with six cores) and Nvidia Quadro Pascal GPUs.

The HP ZBook Studio x360 is a convertible mobile workstation. It features a 360-degree hinge that allows the machine to be put into five different modes, including laptop, tablet, clamshell, presentation and tent.

It features Wacom AES digital pen technology with tilt and 4,000 levels of pressure sensitivity but it is not the first ZBook to do so. It follows on from the HP ZBook x2, a detachable 2-in-1 that HP launched last October (reviewed here). Like the ZBook x2, the ZBook Studio x360 allows architects or designers to start with a concept sketch, then take their designs all the way into 3D on a single device.

With a 15.6-inch display and a fully integrated keyboard, the HP ZBook Studio x360 is less portable than the 14-inch HP ZBook x2, which is primarily a tablet with a detachable keyboard. It also lacks the ZBook x2’s HP Quick Keys, that can be programmed to do a variety of tasks that you might normally do with a keyboard and mouse.

What it lacks in tablet-first functionality, it makes up for in power, featuring a choice of new Intel ‘Coffee Lake’ CPUs, up to the six core Intel Xeon E-2186M (2.9GHz up to 4.6GHz, 6 cores), as well as the Nvidia Quadro P1000 GPU. The machine should offer plenty of performance for mainstream 3D CAD with the six core CPU giving a welcome boost in multi-threaded rendering or simulation workflows.

The machine is ‘Skype for Business’ certified thanks to a ‘collaboration’ keyboard and a world facing microphone. The keyboard has dedicated buttons for answering calls, hanging up and presenting. The microphone (which is located on the back of the display) can be used in ‘conference mode’ so everyone in the room can be heard or ‘individual mode’ where it cancels out unwanted noise.

Other features include a fingerprint reader, facial recognition and HP Sure View G2 that activates a privacy screen at the touch of a button. Thunderbolt 3 is standard. The machine is 36 x 25.4 x 2.04 cm in size and starts at 2.26 kg. It’s a little bit thicker and heavier than the standard HP ZBook Studio G5 which has very similar core specifications.

HP has also done a minor update to the ZBook x2, now giving a choice of quad core processors. 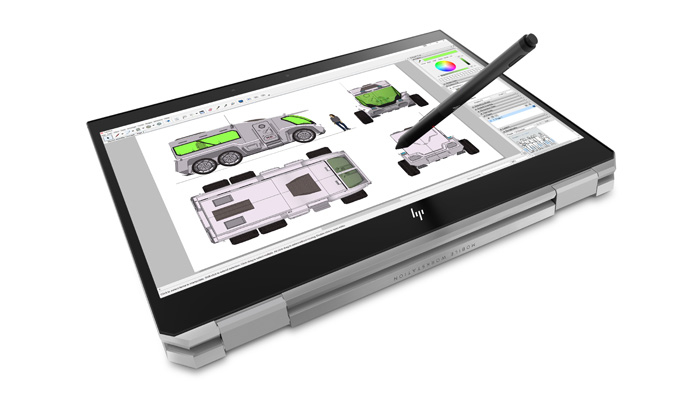 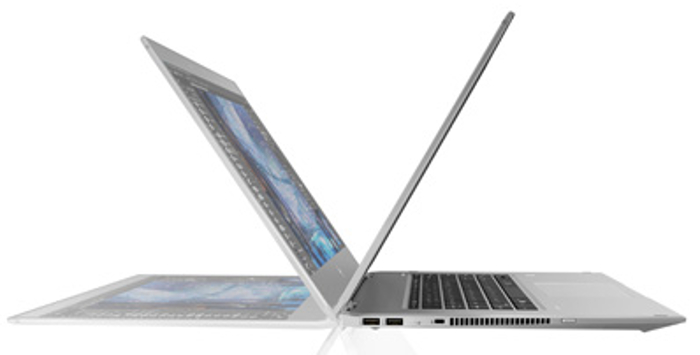 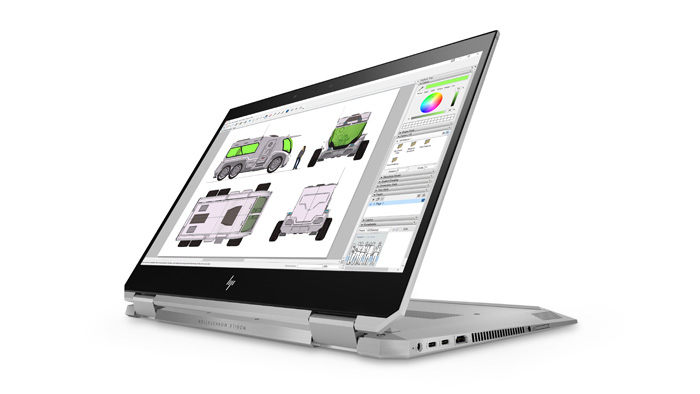 The launch of this entry-level machine came as a bit of a surprise as it means HP now has five different 15-inch mobile workstations in its range. Starting at $949, the HP ZBook 15v is very much targeted at price conscious users, such as start-ups or students, who may have previously gone for a standard laptop instead of a mobile workstation.

The machine gets its workstation credentials in part due to its certified Nvidia Quadro P600 GPU, which should be powerful enough for entry-level to mid-range 3D CAD workflows with applications like SolidWorks, PTC Creo or Revit. 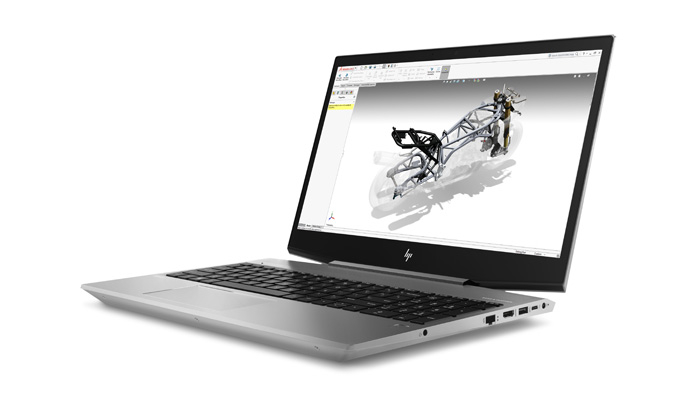 From four cores to six

In recent years, new mobile CPUs have only offered small advances in terms of performance and power efficiency. However, the new generation HP ZBook G5 family has the potential to give a much bigger boost as many models offer a range of optional six-core Intel ‘Coffee Lake’ processors, a significant step up from traditional quad core models.

HP offers several six-core ‘Coffee Lake’ CPUs in most of its new ZBook G5 editions. This includes the Intel Core i7-8850H, Intel Xeon E-2176M and Intel Xeon E-2186M. Having 6 cores instead of 4 will be of particular interest to users of ray trace rendering or simulation software. In applications like KeyShot or V-Ray, it should cut render times by about 30-40%.

HP now offers Nvidia ‘Pascal’ GPUs across most of its ZBook family which should give a welcome boost in many workflows, especially when running demanding graphical applications on 4K panels.

In practice it should mean entry-level machines like the ZBook 15v with its Quadro P600 GPU are able to handle mainstream 3D CAD workflows with relative ease. At the high-end, the HP ZBook 17 G5 should be able to deal with more complex VR applications due to the increased performance of the Nvidia Quadro P5200. 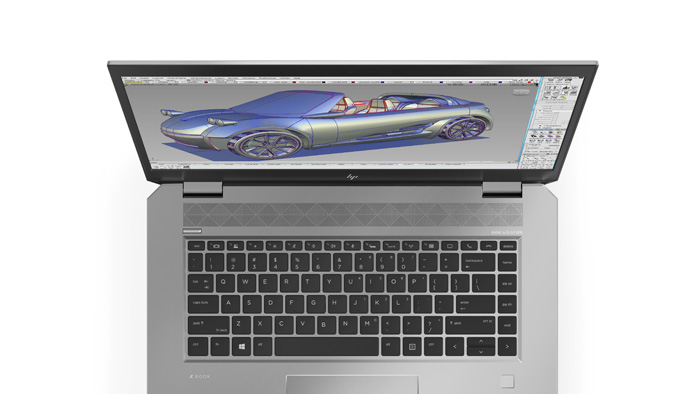 The HP ZBook Studio G5 has a thinner display bezel, shrinking the machine by 15mm generation over generation

HP has completely updated its entire ZBook family with new 6063 aluminium alloy CNC machined chassis that are stronger, more durable and pleasing on the eye. The design is very distinct, with the angled edges echoing those of its desktop workstations. HP has also reduced the size of the bezel so the actual screen extends much closer to the edge of the display. This has helped reduce the overall size of the machines. The HP ZBook Studio G5, for example, is 4% smaller when it comes to width than the previous generation.

For the speaker grill, the chassis features a geometrically punched out pattern. This is not only for aesthetics; HP says it helps improve audio quality, especially for voice, which is important for conference calls. It’s backed up by Bang & Olufsen audio components.

Significant work has also been done on thermals. The HP ZBook 15 G5 and ZBook 17 G5, for example, boast 30% and 20% respective better thermal performance generation over generation. Thanks to larger fans running at slower speeds, the machines will run cooler and quieter, says HP.

Tool-less access, which HP dropped two years ago in favour of more slender machines, has now been re-introduced. The back panel of the ZBook 15 and ZBook 17 can be flipped off easily to upgrade or service key components.

Durability has also been enhanced. HP highlights the ZBook 15 as having passed 14 of the MIL-STD 810G tests, including those for dust, humidity, temperature and drop. 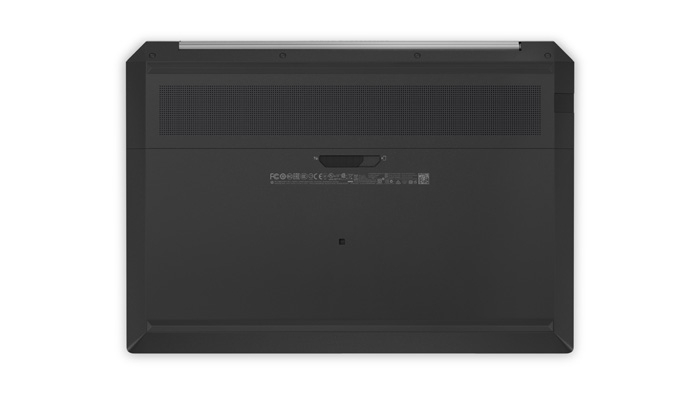 The new mobile workstations have inherited a number of enterprise features from HP’s EliteBook family, including several for security.

IPS displays are well known for their wide viewing angles but the new machines feature an optional HP Sure View display to combat what HP describes as “visual hacking” – also known as ‘someone looking over your shoulder’. The feature, which significantly reduces the viewing angle, can be toggled on and off by pressing FN and F2 on the keyboard.

To stop someone spying on you from the inside out, you no longer need sticky tape and instead can use the webcam’s built in privacy shutter, which physically blocks the lens of the webcam.

There are a whole host of other enterprise security features including: SureStart to protect the BIOS; SureRun to protect against an attacker turning off antivirus; SureRecover, to help non-experts reimage a system on the go; and SureClick, which puts all web browsing in a container so it will not infect the rest of the machine if an insecure website is visited.

In addition to the expected fingerprint sensor, both machines feature Windows Hello (which scans the user’s face with two infrared cameras) and multi factor Intel authentication.

Meanwhile, HP PhoneWise allows you to text, call and receive Smart Phone notifications through your PC by wirelessly pairing your iOS or Android device.

HP is going all out on mobile workstations. No other tier one vendor comes close when it comes to the breadth of products on offer. This recent push (HP has launched four new models in the last six months) seems to have be fuelled by research the company did in 2015 that showed that 62% of its customers work from more than one location.

While we wouldn’t expect all of these new ZBooks to sell in volume, the fact that HP offers such a broad portfolio should resonate well with large architecture, design and engineering firms. HP, and other OEMs can win major deals simply by being able to satisfy the requirements of many different types of users.