Dell has unveiled its first 2-in-1 mobile workstation, the Dell Precision 5530 2-in-1. The slimline 15-inch machine features a flexible 360-degree hinge for multiple modes of interaction and can be used with the Dell Premium Pen, a digital pen with 4,096 levels of pressure and tilt functionality. Like the HP ZBook Studio x360, announced earlier this month, it allows product designers and architects to start with a concept sketch, then take their designs all the way into 3D on a single device.

HP may have been first, but the Dell Precision 5530 2-in-1 is significantly smaller. It has a slighter frame in general, thanks in part to the next-generation InfinityEdge 4K Ultra HD display, but is also notably thinner (9 -16 mm compared to 20.4mm). Much of this is down to Dell’s choice of Intel 8th Generation processor which has Radeon Pro WX Vega M GL graphics built in.

Most mobile workstations feature an Intel CPU with discrete Nvidia Quadro or AMD Radeon Pro GPU. The new Intel processor is different in that it combines CPU and GPU in a single package. This not only boosts performance per watt but reduces the physical size and depth of the chip. It has helped Dell shrink down its 2-in-1 mobile workstation to an extent that was simply not possible before.

To date, Dell is the only mobile workstation manufacturer to go down this route. When Intel announced its AMD chip collaboration in January, AMD told AEC that the deal did not include access to AMD’s Radeon Pro driver, which is essential for the optimisation and certification of CAD and other professional 3D applications.

This looks to have changed now and the Radeon Pro branding should mean the Dell Precision 5530 2-in-1 will get many, if not all, of the same ISV certifications enjoyed by Dell’s other mobile workstations.

So what level of 3D performance can one expect from this new mobile workstation? It’s hard to say at the moment as Dell has not released any official figures. However, if, as we expect, the Radeon Pro WX Vega M GL uses the same Radeon RX Vega M GL silicon as found in the consumer-focused Dell XPS 15, then it should be powerful enough for mid-range 3D CAD software. And with 4GB of HBM2, there’s plenty of GPU memory.

The machine comes with a choice of three processors – all quad core – including the Intel Core i5-8305G (up to 3.8GHz), Intel Core i7-8705G (up to 4.1GHz) and Intel Core i7-8706G (up to 4.1GHz). The first models, due in late August, will only come with 8GB – 16GB DDR4 memory, which is very much entry-level as far as mobile workstations are concerned. Those will bigger memory demands will need to wait until later in the year to get hold of 32GB models. There’s a choice of PCIe NVMe SSDs in capacities from 128GB up to 2TB.

Other features include a new ‘MagLev’ keyboard design which also helps reduce the thickness of the machine and Ultra-thin GORE Thermal Insulation that provides thermal conductivity levels that Dell describes as being ‘lower than air’ in a thin, flexible format, to help keep the system cool.

For those that take their Viz, VR or GPU rendering more seriously, the larger chassis of the 17-inch Dell Precision 7730 gives the additional choice of Nvidia Quadro P4200 (8GB) or Nvidia Quadro P5200 (16GB). Both “Ready for VR” models feature a choice of 4 or 6 core Intel 8th Generation Processors and are thinner, lighter, smaller than their predecessors. 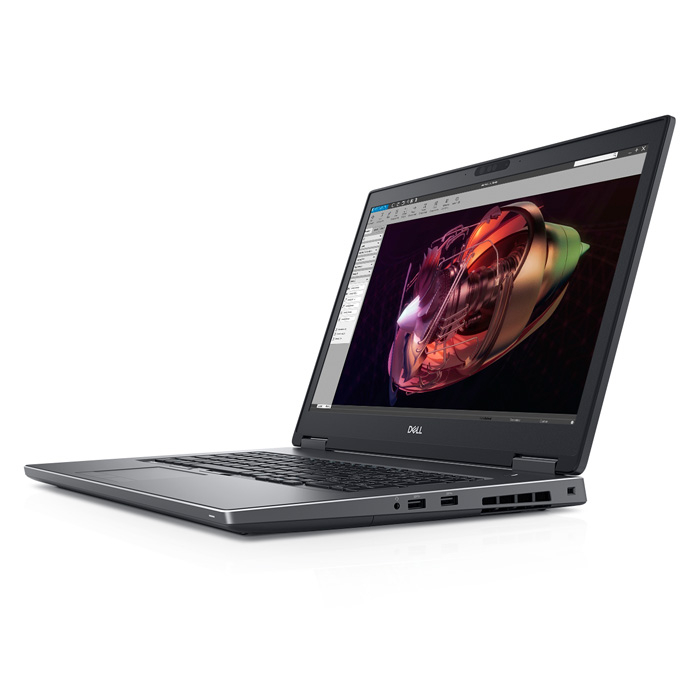 The Dell Precision 7730 is for high-end VR

Meanwhile, the new Dell Precision 5530 takes on the HP ZBook Studio G5 in the slimline 15-inch form factor category with a more powerful GPU (Quadro P2000, compared to the Quadro P1000). Finally, the ‘small, fully customisable 15” Dell Precision 3530 offers the ‘power of a workstation at a price comparable to a PC’.