In the not too distant future, you may well end up launching your favourite design tool in a web browser, or never worrying about upgrading your workstation’s RAM, graphics or hard disk. While investigating this story, Martyn Day has found out that the future is here.

We all know that ‘everything is going online’. From ordering groceries, buying entertainment, to planning holidays or even finding/replacing a ‘life-partner’, it is now more possible than ever to never leave the house. We seem to have quickly adopted digital lifestyles and now take for granted the impact the Internet has had on our lives. However, I believe there is much more to come and a new technology announcement this month got me thinking about how the Internet could fundamentally change the way we use, access and pay for our design tools in the not too distant future.

Project Dragonfly is one of the slickest web-based design applications we have seen. Currently on Autodesk Labs (labs.autodesk.com) there is a lot of functionality to help you space plan your office or home.

While browsing the BBC news site I came across a story about a new company called Onlive (www.onlive.com). Later this year, Onlive will offer an almost unbelievable online service to computer gaming fans. The company will allow customers to purchase a wide number of games, in a variety of formats, and will host these on its top-of-the-range servers and workstations. It will then blast the graphics of the game being played to a web browser running on any operating system. This means that you don’t have to have a high-specification computer or a variety of consoles, at home but can still get the maximum graphical experience. There is also the benefit of never having to download the games, which these days come on DVDs and are huge. This got me thinking, if it can be done for a 60 frames per second, power-hungry game, it can surely be done for 2D and 3D CAD applications?

After some further reading it seems that even the stock market took notice (for once) and industry analysts were claiming that if Onlive worked it could even be the death of such popular devices as the Sony PlayStation and Microsoft Xbox. With an Onlive account you would never need to have a specific games console, or ensure you have the latest graphics card, oodles of RAM or expensive processor. In fact you could probably even downgrade your current system. Onlive should give the same performance on an ATOM-based ultra portable, as it would on an Intel quadcore Xeon. Performance would only depend on the ‘breadth’ of your bandwidth.

For those of you not into games, bear with me. In the last seven years, Onlive claims to have perfected an interactive video compression technique, with ultra low latency (lag) — it literally encodes live video streams into data in one millisecond. This algorithm has been hard coded into a custom processor that comes in a little black box you acquire as part of your Onlive subscription, together with a software plug-in for browsers. If you have a 1.5 Mb connection speed Onlive claims you will get real-time games at Wii resolution (852 x 480 pixels) but with a 4.5 Mb Internet speed, the company is promising to deliver 1280 x 720 at 60 frames per second. Onlive has already signed up the major software vendors: EA, Ubisoft, Eidos, Atari, Codemasters and THQ to name but a few, and is due to go live in September 2009 in the US. 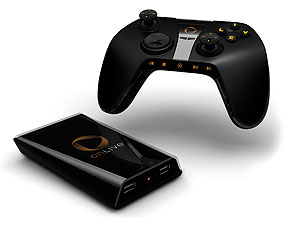 Onlive’s web-based technology, which features a custom on-the-fly decoder and controller to interact with remotely hosted games, could also be adapted to deliver CAD over the web.

If the technology works, this really could be the first industry changing implementation of so called ‘Cloud computing’. Cloud-based solutions are really in vogue at the moment, although not for delivery so much, more a discussion topic and as a future application development area. The basic principle offers dynamically scalable and virtualised (operating system independent) computing resources that are delivered over the web. There is no infrastructure required on the client side of the equation and everything is ‘on-demand’. The ‘Cloud’ vision SaaS (Software as a Service), IaaS (Infrastructure as a Service) and PaaS (Platform as a Service) are all seen as key future business models. Onlive delivers on all three.

There has been similar technology delivered on a local level by Hewlett Packard with its Blade workstations, which operate in a thin-client manner. The workstations can be kept at a remote location and accessed via a simple terminal over a TCP/IP network. So, while the designers may be in India, the workstations they use and licensed CAD software could be, as an example, in Copenhagen. Onlive expands this concept to doing it over the public network (the Internet).

For a few years now, there have been conceptual ideas to try to utilise the Internet for running and hosting design applications but all have been limited by bandwidth and more fundamentally, the lack of native support for 3D in the standard browser applications. To get around this problem there have been attempts to develop and incorporate add-on 3D libraries for browsers but none have helped create a killer 3D application for the web. And should there be a 3D application running in a browser, it would still rely on the Internet bandwidth available, the graphics card in the machine and the grunt of the workstation’s processor to run the application locally. The Onlive concept removes this barrier to the user by only streaming the video of the application.

This Onlive technology surely must be interesting to CAD developers who typically have some experimental web-based solutions at various stages of development. Well, I am just back from Autodesk’s offices in San Francisco where I raised Onlive as a talking point to the AutoCAD development team, to which I was told that Autodesk were one of the ‘less visible’ strategic investors in the company. Knowing the numerous web tools Autodesk has been experimenting with on its Autodesk labs website (labs.autodesk.com), Onlive seems to be a perfect fit and potentially a decent financial investment for the firm.

All web browsers are bad at 3D unless you add one of the numerous plug-ins. It is perhaps not surprising that our industry could not agree on a standard but there are five open-ish popular development tools:

If you look around you will find many small 3D applications that utilise one of these standards but really only to view and maybe rotate basic 3D models which have to be downloaded. The general consensus is that they lack the necessary oomph to form the basis of an in-browser CAD application. One CAD company CEO insider told me: “Most of the 3D plug-ins are either junk or too specific. A ubiquitous one may come along but there is none now.” 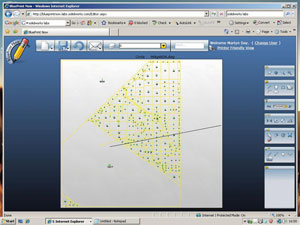 Having given short shrift to those emerging industry standards, I am going to add in some more jargon and mention RIA — Rich Internet Applications. This is an industry buzzword for providing enhanced development tools for browser or web-driven tools. Microsoft is pushing a .NET technology called Silverlight, while Adobe has AIR and Flash. These frameworks expand what is possible to be developed within browsers and provide web-tools with most of the benefits of desktop development tools, such as data persistence, access to locally stored data and integration capabilities.

All these standards and programming layers add hooks so the CAD developers can get their web-based applications to access the 3D graphics and other hardware in your machine. Web applications are moving beyond the browser and now appear to be hybrid applications. A little known fact is that this is being driven by modern phone operating systems, as developers need tools that will deliver applications for multiple target platforms, from low-power and thin-client to heavy workstation and servers.

On the actual delivery of a workable design application, everything at this stage seems quite experimental but eventually I am pretty sure the right combinations will create firm standards and open up rich web-based applications. That is, of course, unless cloud computing and video compression systems such as Onlive don’t bypass these current software development limitations.

On that topic, Carl Bass, Autodesk’s CEO told me: “OnLive allows for all kinds of computer-intensive applications to run well on fully powered servers and low power clients and, when it comes to platforms, I think applications in the near future will run on a number of platforms and it is hard for me to guess in the longer run if one will emerge as dominant.”

While Onlive is not available yet (outside of beta), there are some impressive web tools that show what is capable with today’s cutting edge add-on 3D web technology. Autodesk’s Project Dragonfly (dragonfly.autodesk.com) appears to be one of the more advanced web-based Labs applications that I have seen so far, where users can design interior layouts and spaces using drag and drop and axonometric views. While its interiors focus is limiting, It is well worth trying out to see how fast it works as a browser-only based application on your system.

There are a number of other tools in development, including Project Showroom — a cloud-based rendering tool for visualising interior fittings and colours, and Project Freewheel for DWG viewing in a web browser. (More on these in the following two reviews).

SolidWorks, the developers of the 3D product development system of the same name, also has a web-based DWG viewer, editor and creation tool called SolidWorks Blueprint (labs.solidworks.com). It is fun to try out and use as a DWG viewer but not particularly usable as an accurate drafting tool yet. SolidWorks offers a number web-based file distribution and collaboration technologies on its labs website.

At present there is not any serious commercial attempts at providing a 2D drafting tool, let alone a proper 3D solution in the Mechanical or AEC spaces. It would be interesting to see the capabilities of SolidWorks/Autodesk Inventor/PTC’s Pro/E or Dassault Systemes’ Catia in a browser but that is probably still some years off. In fact, Dassault has told me that it is working on delivering Catia online in the future but estimated three to five years.

While there may not be any serious commercial offerings in the market as yet, Onlive does offer the promise of fundamental changes in the coming years. We may not need to have workstations but share part of a ‘super computer’ that is situated somewhere in the middle of a desert. With a distributed model, the hassle of upgrading workstation components may simply disappear.

Not to forget, of course, the cultural issues such a change would require. It is still an issue for companies to externally store their mission critical data, let alone stream it live via the web around the world, while relying on the security and stability of third parties.

Before I get too carried away, this concept is all based on one thing: the reliability of fast, cheap Internet bandwidth. Countries that do not have the technology infrastructure are going to suffer. Even if each session took 1.5 Mb of bandwidth, in a room of 20 engineers you would need at least a 30 Mb pipe and while our Internet providers promise us much, they rarely, if ever, deliver the bandwidth they advertise. For instance, I currently pay for 20 Mb but am lucky to get 7 Mb.

As with most technologies, the games industry will lead the charge and we will follow. The concept that everyone gets the hottest hardware running their games irrespective of what they have at home seems incredibly liberating.