The BIM concept will always remain a pipe dream, so long as the tools are unable to handle the thousands of components that make up today’s buildings. So far the focus has been on architectural elements. Autodesk has just released a product for Structures.

I feel I should start off this article by first apologising that the product I’m about to write about won’t be available in Europe til next year. So, I will be teasing the structural engineers amongst us as yet again, Autodesk is developing products primarily within the USA, first for the home market and then adapting to the local conditions found in Europe and Asia/Pacific. I guess this make business sense, as the US is a very large market and while the EU may be as big, or larger, it is not homogenous. Still, I do have concerns that while the products aren’t probably designed to be US centric from the outset, the fact that the first two or three revisions are fuelled by US-customer feedback can’t help but lessen the flexibility when it’s time for release in the EU.

So, enough grumbling. Revit is Autodesk’s ‘next generation’ AEC design tool. Bought for the princely sum of $133 million, in 2002, the product has found it tough going against the core 2D products, on which the AEC community doggedly hold on to. The concept of Building Information Modelling (BIM), where a single 3D model provides all the 2D plans, elevations and sections, has still to catch on. There have been successes in small architectural practices and with SOM on the Freedom Tower in New York, but Revit’s architectural sales means it is going to take a long time to payback its purchase fee.

Instead of drawing out everything with lines, circles and arcs, Revit uses a component-based design system, where the designer places walls, doors and windows. Previous revisions of the software have seen the complexity of components on offer mushroom, greatly enhancing the variety of architectural designs Revit can be used for. However the greater goal for BIM is to have a single model which contains components of all the building assets, structural and building services. To date Revit has only offered some dumb structural components for visual placement, while ADT has already seen a building services (HVAC) module be developed. The recent launch of Revit Structure now means that ADT can do architectural and services, while Revit can model architectural details and structural elements. This decision means neither product quite yet completes on the BIM concept of total building definition. However, Autodesk is developing a Structural package for ADT, as well as a building services package for Revit. At some point Autodesk will have two complete modelling packages, although the AutoCAD-based ADT is still more aimed at documentation-based design, than a modelling tool. Revit’s parametric engine also ensures it’s of greater use, earlier within the design stage, making short work of project-wide edits and updates. 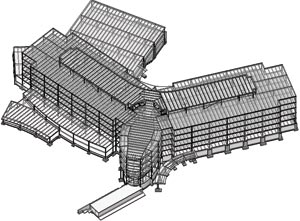 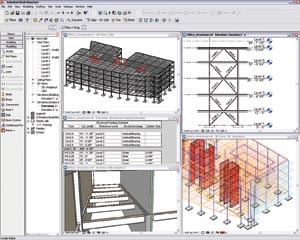 Autodesk Revit Structure is a building information modeling platform where a single model is used for drawing production as well as by 3rd party analysis software.

Within that the design process, structural analysis and the changes that the results can have on the overall project outcome, make Revit a great place to deploy this type of technology. Basically, Revit Structure gives structural engineers a single environment in which all the structural members can be created in 3D and held together with the analytical model. Autodesk has developed an API (Application Programming Interface) which allows third party developers to take the Revit Structural model and analyse the data. As things stand, structural engineers may use a multitude of analysis packages, perhaps having to model the steelwork or nodal model many times. With this solution, Revit acts as the interface for multiple analysis packages, saving time and simplifying the data task. The results of the analysis can be fed back into Revit Structure and used to improve the structure, which may impact the architect’s original design – and as this is all in Revit these changes will automatically feed back to the production drawings. Obviously the desire here is that the design was created in Revit Building, however Revit Structure has been designed to work just as well as a stand-alone structural interface.

Currently only available in North America, Revit Structure is linked via an API to several US-based industry applications for building analysis: RISA-3D from RISA Technologies (www.risatech.com), ETABS from CSI (www.csiberkeley.com) and ROBOT Millennium from RoboBAT (www.robot-structures.com). Autodesk is currently speaking with equivalent EU-based developers for the products release here next year, however Revit Structure is already in use and proving valuable on real projects.

As I pointed out ADT and Revit seem to be getting different bits of the BIM jigsaw at different times. However there is an increasing degree of compatibility between the products (but perhaps not as much as some would like). It’s possible for a structural firm to import an ADT model directly into Revit Structure, using the architect’s model for design reference. Although I understand that many Structural engineers in the UK tend to remodel architect’s drawings to iron out any errors.

Similarly, users of Autodesk Building Systems (based on ADT), can import structural members as intelligent building objects. When exported, these can be used directly in Autodesk Building Systems, enabling HVAC engineers to layout their pipe/duct systems within the context of the structural model. Revit Structure can also import ‘dumb’ ACIS geometry and objects generated by Autodesk Building Systems, allowing structural engineers to view the geometry of the building environmental systems within their structural model. That said the opportunity for ‘true’ collaboration will be between an architect using Revit Building and a Structural Engineer using Revit Structure, enabling the parties to work on a combined model, or allowing powerful cross-linking between the parametric Revit models. 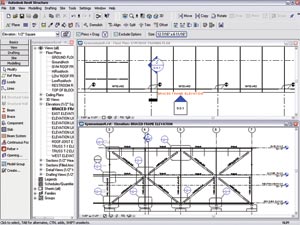 Because any view in Autodesk Revit Structure is just a different representation of the same database, it takes no longer than a mouse click to get an automatic elevation view or section cut through the building model. Just place the elevation tag on a floor plan and the elevation view is immediately available. 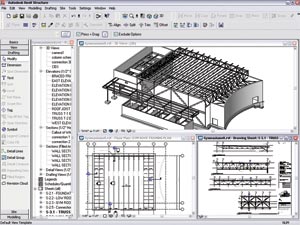 Perhaps, unusually for Autodesk, Revit Structure is more useful as a design tool, proofing the concept, as opposed to a pure documentation tool. There are more competent and complete steel detailing packages already out there. Revit Structure is looking to play a key role in structural design optimisation, while improving the level of co-ordination between architect and structural engineer.

The underlying differences between ADT and Revit, means that true model integration between the two competing systems, including geometry and intelligence, is really an unachievable goal. Autodesk has come up with a workable compromise, especially given the typical workflows, where each discipline edits its own data but the other disciplines merely need to be able to ‘see’ their collegues’ geometry. In time each application will get it’s own building systems and structural add-ons. At that point, the BIM concept becomes more than just an interesting technology, enabling projects and design/build firms to standardise on a single 3D platform and interface.

I think Revit Structure is the right product at the right time in the structural market. The modelling power of Revit, combined with the parametric editing capabilities make it a great front-end for an iterative design process such as structural analysis. While in the past Autodesk has avoided developing an API for Revit, Revit Structure has necessitated this. Autodesk has settled on offering Revit as a front-end for the structural engineer, while the hard maths is done by the add-on applications, which the company is busy developing links with.

Unlike the Architectural community the payback of a Revit-based workflow is more immediately beneficial; reducing the need for multiple models and representations, offering a single easy to use environment and a tool which is capable of updating the model after analysis and quickly sharing this information back to other project members. The key benefit here for Autodesk is that the structural market is already on-board with the 3D message but have not been particularly well-served with easy to use products, particularly in the US. I think the UK has two or three key developers that have managed to cover the market and it will be Autodesk’s task to bring them on board over the next year.

Whether Revit Structure will really bring on the adoption of BIM across the AEC landscape, I am really not sure. It will be good news for those few companies that are using Revit already. The nature of the fractured building process means that disciplines use their own tools for their own purposes. There’s little trust in the quality of data that they are initially provided and the common denominator is 2D DWG files.

Obviously, the Revit Structure does not do everything required, it’s an early release, but it will improve over the coming year before it’s unleashed in Europe. Its release will be synchronised with releases of Revit Building, so the same data types will always be available in each. I am not sure how this will work with ADT’s timings but Autodesk appears to have most product ready around March of each year. We will keep you informed of any news on the further development of this product.