AEC professionals can now use the LiDAR scanner on the iPad Pro or iPhone Pro to scan buildings up to 5,000 sqft by combining scans. Greg Corke caught up with company founder Andy Putch to find out more

SiteScape was one of the first construction-focused mobile apps to take advantage of the LiDAR sensor built into the iPad Pro and iPhone Pro.

The software was designed to make LiDAR scanning more accessible to AEC professionals. It raised the question: why use an expensive laser scanner or handheld SLAM, or make do with a Disto and pencil and paper, when you can use a commodity device to capture a site or building very quickly?

SiteScape launched as a free product in Autumn 2020. It was followed in Autumn 2021 by SiteScape Pro, enabling AEC professionals to sync their 3D scans to the cloud, share them with collaborators on any device and annotate with comments and measurements. Export support was expanded to take in .RCP, as well as .PLY and .E57 formats, so data could be more easily brought into CAD, BIM, point cloud and collaboration tools such as Revit, AutoCAD, Archicad, Sketchup, Navisworks, Recap, CloudCompare, Revizto and many others.

At the launch of SiteScape Pro, founder Andy Putch told AEC Magazine that while the software could be used on retrofit projects, for early-stage design, he saw a bigger role in construction, for capturing as-built conditions, or for resolving issues on site. The focus was on scanning small areas of interest. “You’re not going to go through and scan an entire commercial building and try to piece that all together,” he said.

But, as it transpires, SiteScape’s customers didn’t listen. Putch explains that power users started sending in examples of scans of large-scale projects, “Once they got comfortable getting the scan data into Revit, or whatever product they wanted to use, they were hooked. It was like, ‘I just want to get more and more [scan data] from different times, from different parts of the site, larger scans.’”

Requests started coming in for a workflow that enabled multiple scans to be easily stitched together. The SiteScape team quickly ‘cobbled together’ a ‘hack’ that used open-source software CloudCompare. “It was a way to get to an end result, if you needed to brute force it, but the learning curve and manipulating the data in 3D [in CloudCompare] is quite difficult,” he says.

Putch recalls that, much to his surprise, every SiteScape customer he mentioned this workflow to immediately adopted it, but he knew this couldn’t be a long-term solution. “I was thinking the amount of time it took, and just the uninviting nature of CloudCompare, was going to really push folks away.

“We knew we needed to streamline the process within SiteScape, because we know exactly how to make this much more approachable and put in the guardrails to make sure that users are not going to go in the wrong direction or capture data in the wrong way.”

This all led to the development of SiteScape Multi-Scan, a streamlined workflow that allows for the capture and alignment of segments in a single scan.

Users quickly capture up to ten neighbouring scans on a single floor, sync them to the cloud using background uploading, and then manually align them in the browser-based software to create a single point cloud that encompasses the entire building.

The registration process works by constraining the scans in plan view, as Putch explains. “First you line up the walls to the grid, get everything in parallel, and then just go piece by piece correcting those little local inaccuracies.”

“Walls, and in particular corners, make such easy references to immediately get the plan and get to that really accurate end result.”

The video below does a good job of demonstrating the process.

For each scan section Putch advises that users go no bigger than 500 square feet, and to keep the spaces as square as possible — so no long corridors. With ten scans stitched together this makes 5,000 square feet, a highly significant number, according to Putch.

“This is already 50% of existing US commercial building stock, and the vast majority of residential. So most folks can capture the entirety of most buildings.”

Some companies are scaling this up considerably. The Illinois Institute of Technology, for example, has fully mapped seven buildings, totalling over 445,000 square feet, as part of its IIT Digital Twin project.

The right tool for the job

As the iPhone / iPad Pro is an entry-level device, it doesn’t deliver the accuracy of a high-end laser scanner. Putch explains it is important to set the right expectations when using SiteScape, to understand its limits and the types of decisions that can be made with the data.

He refers the manual data entry problem that firms often encounter at the early design phase. “There are so many facets and dimensions to a space that, as a designer, I want and need to document and take account of, but each one takes a lot of effort. Doing that manually with a tape measure is hard to do consistently and accurately. There’s even only so much you can do with a laser Disto.

“For us, the end goal is really a seamless way of going from capture to a machinereadable model that you can just start using immediately, whether it’s on the design side, co-ordination or conflict resolution, but also for construction for estimation.”

Putch believes SiteScape can help get firms off paper drawings, enabling them to go seamlessly from site to CAD, and make BIM a lot more applicable and viable. “The devices are already in their pockets, the cost of the software is comparatively cheap,” he says. “The added investment in having more BIM capability in house is going to pay huge dividends, because I can actually get more out of it, because I’m not adding this huge cost every time I need to digitise the space.”

Tracking any scanner’s location in space creates drift over time – meaning the longer you scan, the less accurate the results. To minimise build-up of drift, SiteScape has an area cap of 12 million points in a single scanning session, which Putch says delivers an accuracy to within +/- 1 inch.

When it comes to combining scans, with good references, such as corners, he says manual registration can be very accurate, but acknowledges that when going across wider areas, accumulated errors can creep in.

“The thing that we’ve been hearing is, ‘as long as I can get a consistent view of the entire plan view, that unlocks so much in terms of then drilling into the details,’ because it’s more about getting a complete sense, at that LoD 200, to just start going at your schematic level design.”

SiteScape has come a long way in short space of time, but Putch is continually looking to improve the software.

The next step is to add more scan segments, to capture even larger areas, and to also capture across different floors. His team is developing better compression to support larger datasets in a web browser, plus to make it easier to move data around.

Work is also underway on an auto alignment capability, currently in closed beta, as Putch explains. “The goal is to transfer from the manual process being the starting point, to being a backup.

The hardest part is being able to address every single scenario. So, we need to round out our edge cases and that’s where the manual flow will always be a valuable alternative.”

Since 1995, Illinois Tech’s Interprofessional Projects Program (IPRO) has provided an alternative to traditional undergraduate education and remains one of just a few programs of its kind in the country. In the program, multi-disciplinary student teams are tasked with finding solutions to problems impacting business, industry, or the world at large. 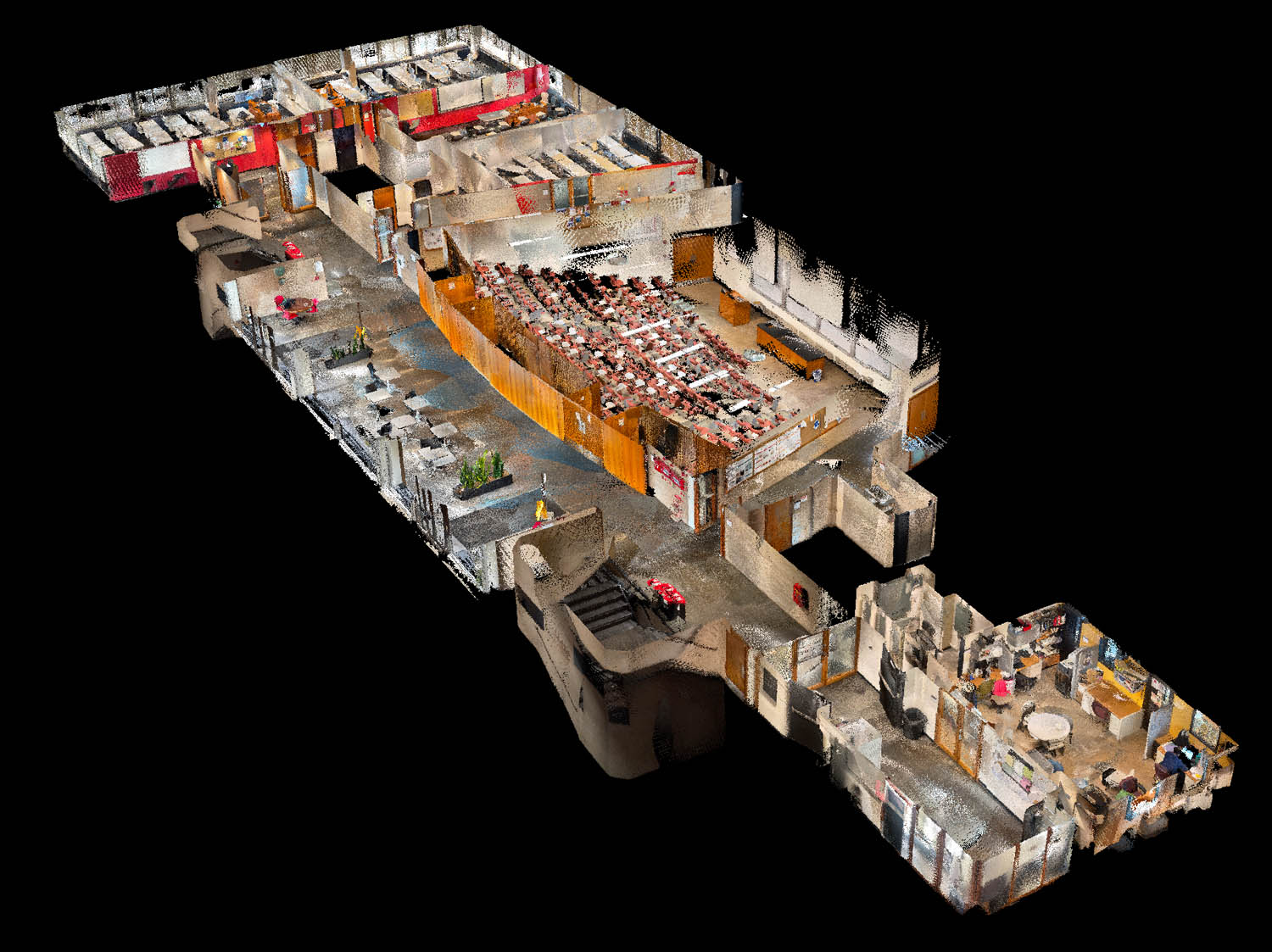 Early in the pandemic, Prof. Ankit Srivastava was experimenting with agent-based simulations to model potential Covid transmission on the IIT campus.

To model the IIT campus for these simulations, he started with data from Open Street Maps which gave rough geometries of the building exteriors on campus but to simulate transmission more accurately, detailed maps of the building interiors would be needed. So, in the Fall of 2021, under Prof. Srivastava and Prof. Mohammad Heidarinejad, whose research is in digital twins for architecting and operating smart cities, students began the fantastically ambitious IIT Digital Twin, a new project with the goal of creating a digital twin of the entire IIT campus.

Manually documenting the contents and then measuring the dimensions of every room of the 40+ buildings on the 120-acre campus would be a gargantuan task.

But, without the resources for traditional tripod-based laser scanners, which start at $30,000 per scanner, with high-end models going into the six-figure range, the class looked to leverage LiDAR on the latest iPad Pros.

“In the beginning of the project, the students tried out pretty much all of the LiDAR scanning apps available on the iPad, and they universally settled on using Sitescape for their scans,” explains Srivastava.

The class used SiteScape to 3D scan building interiors and capture point clouds that could be used in Autodesk Revit.

However, scanning at this scale is extremely challenging, as just one building scan can be billions to trillions of points, creating terabytes of data.

In addition, in any mobile scanning system, tracking a device’s location in space creates drift over time – meaning the longer you scan, the less accurate the results.

Students had to develop a workflow where they would scan a building in smaller, more accurate sections (more than 200 for some buildings!) and then combine these sections into a single model with CloudCompare and Revit.

This workflow was effective but cumbersome, as scans needed to be aligned in a specific manner and special care was needed when organising and managing large numbers of scan files captured in different locations at various times.

Despite these challenges, the project has had major successes and over 50 students fully mapped seven buildings with more than a thousand scans, totalling over 445,000 square feet.

“Students were happy on how the app was able to preserve the geographic location of rooms, allowing a speedy merging of the scanned files and exporting them to different file extensions,” concludes Heidarinejad. “I’ve used professional LiDAR scanners and I’m very impressed with the quality of SiteScape scans for indoor spaces.” 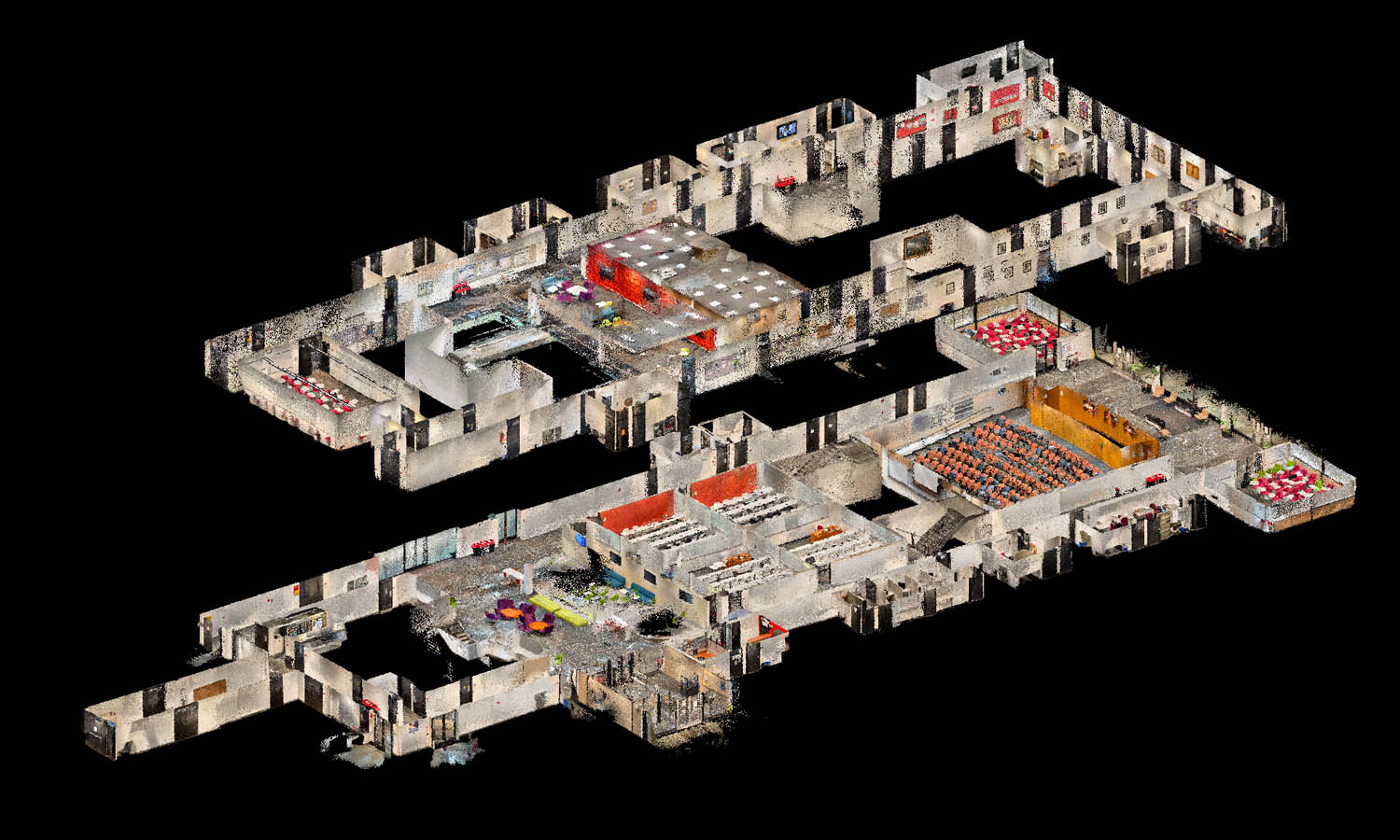