The Aiguilles-Queyras Hospital Center is a 20,000-square meter facility in Aiguilles, France. Located in the French Alps, the facility has the highest altitude of any hospital in France. The hospital will be undergoing a renovation to accommodate more out-patient procedures and provide additional short-stay beds, and also support upgraded security standards.

Before starting any plans for renovation, the hospital realized they would need accurate, existing-conditions information that reflected how the facility’s floors and walls had settled and tilted through the years, which was magnified due to the Alps’ mountainous (and slowly collapsing) geography. To that end, they turned to reality capture and ATFF, a firm that specializes in reality capture and scan-to-BIM services, located in Annecy, France.

Reality capture is the process of digitally capturing spatial information, typically using laser scanners and/or photogrammetry. The captured data is then processed in specialized software to produce a points cloud or surface mesh of existing conditions, which can be used as a reference to support digital design, construction, and operations.

In early 2016, the hospital commissioned ATFF to capture the facility’s existing conditions—inside and out—and produce a highly-accurate 3D BIM model for the renovation’s design. “We faced two major challenges on this project,” says the other ATFF co-founder, Adrien Truwant “We had to capture the existing conditions in January, a cold and snowy time in the Alps. Moreover, we had to accommodate the hospital’s natural activity, with patients and staff constantly moving around.”

“ATFF uses Autodesk ReCap Pro software because it allows us to use both laser scanning and photogrammetry, and then combine all this information into a single model,” explains ATFF co-Founder Florian Fauconnet. “For example, on this project, we used laser scanning to capture the inside of the hospital, and a camera mounted on a drone to capture the outside of the buildings.” 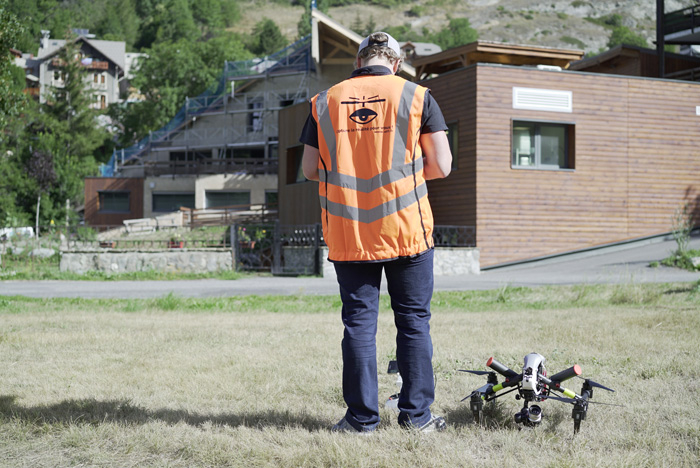 The firm had just over a week on site to complete their capture efforts. They used a DJI Inspire drone to capture the outside of the facility and a FARO Focus3D X 130 scanner on a tripod to capture the hospital’s interiors. The team tried to do the bulk of their indoor scanning during meal times, at night, or on weekends to minimize the capture of moving people and equipment.

ATFF technicians captured the roofs and facades in just one (albeit) cold day. Over the course of seven more days, two technicians worked two shifts to scan the entire hospital interior—from lobbies to operating rooms and everything in-between. 3,500 targets were placed in the building to help identify matching data points between the various scans, which optimized and streamlined the accuracy of the inside survey. In total, the technicians took 952 photos and 1200 scans.

ATFF then used ReCap to process, register, and clean up the data—creating a points cloud that could then be exported to Revit (or almost any other Autodesk design solution). The ReCap software used the targets to automatically calculate the position of a scan, provide feedback as to whether the selected scan was well placed relative to another (already processed) scan, and merge the individual scan into the aggregate points cloud. The fact that the team did most of their surveying at quiet times in the hospital—thereby limiting the digital artifacts of people in motion that could potentially block targets or obscure common data points—helped ATFF avoid having to manually identify common points between scans. This also limited the cleanup efforts that would have been needed to edit and remove these digital ghosts from the points cloud.

With the completion of the on-site survey and points cloud generation, the ATFF team returned to their office in Annecy and started working on the BIM part of the scan-to-BIM process. The team used the points cloud in Revit as a reference to develop a complete 3D model of the hospital.

“It took approximately six weeks to model the hospital,” says Florian. “And without reality capture and ReCap, the total project would have taken months longer.” A traditional survey would have been very time consuming, and the team would most certainly have required several more trips back to the site for additional measurements or missing data, which would have seriously delayed its modeling efforts.

“The ReCap points cloud helped us virtually move around each building and floor from our own office,” says Adrien Truwant. “We can remotely take measurements and revisit the site whenever necessary. In addition, they can use the points cloud to digitally collaborate with the hospital—helping them to better understand any issues surrounding the redesign of their facility.”

“We saved time and money using ReCap because the data was completely accurate, the points cloud was automatically assembled, and the software integrates perfectly with Revit—making the entire scan-to-BIM process more efficient,” says Florian Fauconnet. “This is especially important for a relatively small firm like ours and gives us an important competitive advantage.”

In summary, the key benefits achieved in using Autodesk Recap and Revit workflows include:

• Fewer trips to the jobsite. • Immersive visualization – stepping in to the digital model virtually.

• Seamless integration with design tools such as Revit.

Learn more about ReCap and get the FREE eBook to discover 7 ways Reality Capture can help you deliver projects with more accuracy and efficiency.

Empowering AutoCAD Users with Alternatives and Choice
A Superior Way to Model Precast Girder Bridges
Flexibility for BIM in the cloud
Why professional monitors matter for AEC professionals
Are you getting the most out of your CAD software?
Revolutionize collaborative architectural design
The power of education
Bridging the gap between CAD and real-time rendering
Advertisement
Previous Post
Next Post