It’s time for CAD tools to start sharing the burden of creativity, adding their own ideas to the ingenuity of human designers. Martyn Day reports on the latest developments in computational and generative design and examines how Autodesk is ramping up development

Programming and scripting in CAD tools is nothing new. In fact, it’s a long-established principle, allowing users to create features absent from the as-sold toolset, from the small and simple to the hefty and complex.

Back in the late 1980s and 1990s, any AutoCAD user worth their salt had a few AutoLISP skills under their belt and were happy to customise their drawing tools. These days, with Bentley Systems’ GC, Rhino’s Grasshopper and Autodesk’s Maya, Max and Dynamo, users of most products benefit from rich suites of very capable tools.

Most BIM applications, by contrast, are basically Lego sets: collections of predefined objects (walls, doors, windows and so on) that can be configured, edited and arranged into ‘families’ of made parts.

For some, that’s been a problem, especially if they’re looking to create non-linear buildings of interest, rather than rectilinear, functional ‘blocks’. Signature architectural practices, of the kinds led by Norman Foster, Frank Gehry or the late Zaha Hadid, have been less likely to use early BIM tools because of the constraints imposed by their geometry engines.

Meanwhile, although early 3D modelling systems would allow the creation of interesting forms, these forms were static and needed to be remodelled to make changes, having little or no parametric capabilities.

Signature architectural practices have been veritable hotbeds of scripting and computer-generated forms. They, along with a new generation of experimental architecture students have learnt scripting languages and played with algorithms to make geometry dance, relying on the computer to recalculate each and every change.

There are plenty of software options for exploring this, with GC, Grasshopper and Maya seemingly the most commonly used tools – and Grasshopper easily winning the popularity contest among students, thanks to its very visual and easy-to-use, diagrammatic style of programming.

While Autodesk has had ‘skin in the game’ here with Maya, this software was still specialist and lacked BIM capability. So for some time, it was clear that AutoCAD, Revit and other Autodesk products might benefit from a generativestyle programming language.

It was a stroke of luck, then, that Dr Robert Aish, Bentley Systems’ key developer of its GenerativeComponents parametric CAD software, was persuaded to jump ship to Autodesk in 2008. He went on to develop a new baseline parametric programming language called DesignScript.

Later, Autodesk acquired Dynamo, created by Ian Keough, which brought a similar visual programming front end to DesignScript. Today, Dynamo is a fundamental capability spreading its wings from a standalone product to one that connects and drives Autodesk’s core design tools.

At the same time, computational and generative design has expanded its scope from handling complexities of geometry and conceptual design, to the automation of common tasks and Autodesk’s most advanced customers are starting to dabble with scripting their way to all sorts of benefits. 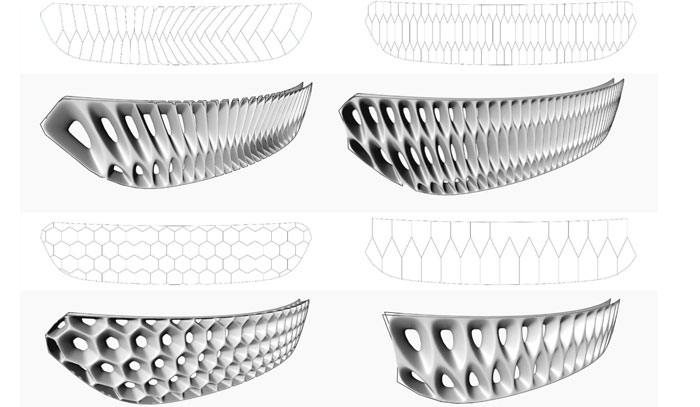 Generative forms computed and modelled within a define boundary. This enables rapid evaluation and fine tuning, without having to manually re model

Dynamo builds on the original development of DesignScript, which is a powerful, text-based parametric and associative language. Dynamo provides a visual layer, with visual nodes and connectors, which users use to define and build programmes that the computer can execute. In the background, these visual nodes, connectors and functions create the script. In short, it’s programming without needing to know or understand the syntax.

Dynamo Studio (charged at a subscription rate of £280 per year) is a complete standalone environment that includes a modelling window and a powerful solids/ surface geometry generation kernel.

Users can lay out grids, draw base geometry/sketches and add points that form the basis of operations. These could be floor height, splay, pitch, strut width – any variable the user can imagine. They then apply constraints, formulas and transforms to create very complex solutions, just by defining basic rules and interactions.

Intelligence can be added, so that if a span exceeds a certain length, for example, an additional column may be added automatically and then mapped to Revit.

This could be a complex roof truss structure or panellisation of a bespoke curtain wall system. It could be used to drive analysis of a design, to optimise fenestration areas or use feedback loops to ultimately derive the optimum solution.

Dynamo Studio also hooks into Autodesk cloud services for additional capabilities. There is a version of Dynamo for Revit, available free with Revit 2015, 2016 and 2017.

At the conceptual end of the spectrum, Autodesk has FormIt 360 Pro and Dynamo is making its presence felt here, too. FormIt runs on tablets in the form of native iOS and Android apps, inside modern web browsers and also as a desktop Windows application. It’s fully compatible with Revit for a continuous flow of concept to detailed model and documentation, with access to cloud services for analysis, materials and more.

With the Pro version of FormIt, users can connect a Dynamo Studio script to the Windows app for FormIt. Dynamo content can be dragged and dropped into FormIt models to access the same Dynamo parameters. The Dynamo link and data is stored with FormIt for editing later.

Most firms will only have a few employees skilled enough to use scripting tools – but Autodesk is looking to expand the use of Dynamo scripts beyond a highly trained elite. One function that it has demonstrated at a Revit Technology Conference (RTC) event is ‘Playlists’. These effectively remove the wires and boxes for the ‘consumer’ of a script and gives neater front ends for teams to call up tools created inhouse – perhaps to check a building for LEED glazing, for example, or for conformance to lighting standards.

In the background, Dynamo can be running through a complex script and making calls to other components, such as analysis tools and spreadsheets, but for the user, it’s a much less ‘messy’ experience than loading and executing scripts. The Revit team is looking at how all this power can be more easily digested by users in the future. For now, Playlists are a demonstration-only product.

“There’s a lot of building knowledge lying around out there that’s free, in academic papers, magazines but it’s almost impossible to apply that to buildings as it’s all ‘siloed’ or knowledge that’s locked in design teams,” says Anthony Hauck, director of product strategy at Autodesk. “That can now be captured in scripts and shared and developed further.”

Autodesk has worked with Chicagobased architecture and design firm Perkins+Will on ‘Project Fractal’ (thebuildinglab. info). This involved Perkins+Will bringing together 20 employees from all over the US to consider the problem of computational space planning.

At the start of most projects, teams have an outline brief and need to tease out a number of possible options to best use that space. Using examples of past projects, the Project Fractal teams evaluated computational solutions to see how what they came up with compared with what was actually designed.

One example used was that of a hospital bed tower. A complex script was generated in Dynamo to explore the relationships and layout possibilities. The challenge was to see if the solutions that the Dynamo script suggested were similar to the ones that humans came up with — albeit at a much slower rate. This was all driven from an Excel spreadsheet: the spaces could be arranged with different weightings, which were taken into consideration throughout the computation cycles.

By working with real-world examples, the project showed that designers could let computers take the strain when it comes to suggesting optimum layouts, freeing up their own time to apply their knowledge and judge how designs met the client’s brief and the building’s constraints.

In future, designers will also be able to interact with the system during live calculation and add weight to different criteria, providing a true interactive design exploration experience. For now, Autodesk is experimenting with getting the system to compute maximum, minimum and average solutions.

In the case of a football stadium, the team used Dynamo to create optimum seating layouts, letting the system iterate the design as it met different weighted criteria. At the moment, the system shows all the results it gets – both wrong (in red) and right (in green) – but this could change, so that it displays only those solutions that meet the design criteria. At the top of the screen, the fit curve shows how strongly the derived design scores for each of the conditions. 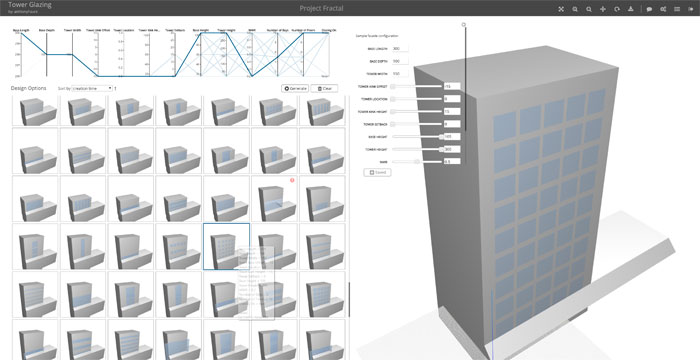 Project Fractal offers an easy to interpret interface for Dynamo scripts. Here, evaluating the placement of glazing on a facade, the software derives design solutions with graphical feedback on how they meet a range of pre-defined criteria

Stepping outside of traditional BIM, Project Monolith (monolith.zone) is a voxel-based engine that Autodesk is working on with the aim of solving f abrication problems in future, according to Panagiotis Michalatos, an architect, assistant professor at the Harvard Graduate School of Design and a principal research engineer at Autodesk.

Up to now, he explains, most geometry engines were more concerned with the surface complexity of designs. If you are lucky, they may be a solid representation, but this bears no relevance to the material from which the solid is made. It’s always assumed to be a consistent material.

Voxel technology ‘rasterises’ solids by breaking them down into tiny 3D pixels. While they have been around as a concept for a long time, voxel modellers have been very CPU-hungry. Now that we have the power and are getting 3D printers that can make use of their ability to create solid out of multi-materials, this becomes an intriguing concept.

The latest 3D printer from HP, for example, is actually based on voxel technology: it breaks solids down into trillions of points, which it prints by inkjet, drop by tiny drop. The added benefit is that the machine can alter the material properties – colour, conductivity, elasticity, heat capacity, for example – at a micro level, making it possible to control the very make-up of manufactured materials.

This means that support structures or conductive wiring, for example, might be be built into materials. A traditional solid modelling CAD package would struggle to interpret and drive this capability for the next generation of digital fabrication machines – but these new developments open the door to creating some very interesting structures, probably best generated by something like Dynamo, but acting in Monolith. 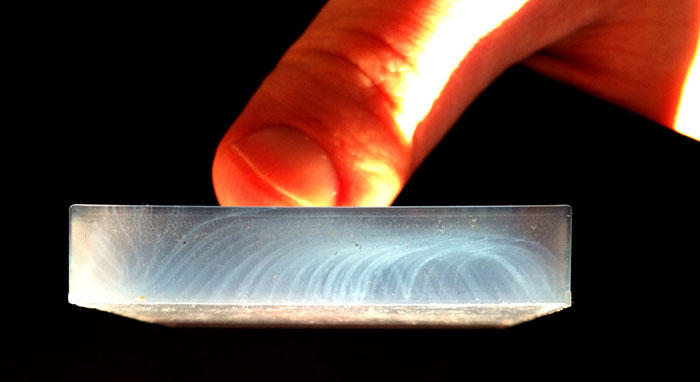 Autodesk continues to surprise with the breadth of its developments. Dynamo may have started life as a visual scripting language, launched to compete with Grasshopper and the like, but as its reach expands to FormIt, Revit and other applications, it seems conceptual design and geometry is just one aspect of its application.

Working with customers to experiment with applying scripting to facilities design, room layouts and easier ways to interact with Dynamo-derived scripting will lead to new capabilities within design tools. For commonly experienced problems, meanwhile, there’ll be communities where knowledge and experiences are shared that might have previously been in the hands only of the most highly skilled employees.

Monolith is perhaps the ‘odd product out’ in this article – but instead of the programmability of design, we are in a new age where the physical properties of matter can be manipulated and programmed, not just at a large scale, but at a molecular level.

To get the benefit of these advances, our engineering analysis tools have to be liberated to solve real-world problems not only by surface, shape and reinforcing structures, but also by manipulating the way materials are formed in forthcoming 3D printing processes. This will have far reaching consequences on the way we make everything and anything.