The Nvidia RTX A6000, one of the most eagerly anticipated workstation GPUs in recent years, is finally here. And it’s certainly been worth the wait, writes Greg Corke.

Nvidia first announced its new Nvidia RTX A6000 workstation GPU back in October 2020. But with delays, we’ve been eagerly awaiting its arrival.

And now it’s finally here – well, nearly. UK firm Scan is taking pre-orders for the PNY Nvidia RTX A6000 from 3 March and sent us a sample to review inside its new 3XS GWP-ME N1-32T AMD Ryzen Threadripper workstation, which we review in full here.

Tuned for visualisation workflows, the Nvidia RTX A6000 (A for Ampere) is Nvidia’s second generation RTX GPU. With an emphasis on hardware-based ray tracing, it promises to deliver more than double the GPU rendering performance of its predecessor, the Turing-based Nvidia Quadro RTX 6000. And, of course, it also offers a significant boost for 3D graphics, VR, and AI workflows. And all for £3,730 + VAT.

The Nvidia RTX A6000 is the first workstation GPU to be built on the Nvidia Ampere architecture, and also the first to support PCIe Gen 4. With double the bandwidth of PCIe Gen 3, it should mean data can move in and out of the GPU quicker, but it won’t benefit all workflows. PCIe Gen 4 is currently only available in workstations with the latest AMD CPUs.

The observant among you will have noticed that the Nvidia RTX A6000 is missing something. Yes, after 17 years, it appears that Nvidia is retiring its Quadro brand.

For someone who has written about Nvidia professional GPUs since the early 2000s, it’s hard to get used to this change. And, it would seem, Nvidia is struggling too. For the October launch, product photos were sent out with ‘Nvidia Quadro RTX A6000’ in the file name, which suggests a last minute re-branding.

But the Nvidia RTX A6000 is certainly a Quadro card in everything but name. It has certified drivers for pro applications, renowned reliability, ECC memory and plenty of niche features for pro visualisation, such as stereo and Frame Lock for viz clusters. There’s also support for Nvidia virtual GPU (vGPU) software, which allows a workstation to be repurposed into multiple high-performance virtual workstation instances.

This is particularly relevant for those working with high poly count models and very high resolution textures in GPU renderers or real time visualisation / VR. But more on this later.

What’s more, two Nvidia RTX A6000s can be bridged together with an NVLink adapter to create a memory pool of 96 GB. However, sharing geometry between two GPUs can come with a significant performance hit.

Beauty and the beast

Nvidia’s product design team has really gone to town on the Nvidia RTX A6000 and the card is a thing of beauty, with a minimal angular design and black mirror finish. NVLink, Stereo and Sync connectors are all hidden away behind discrete panels.

The board is rated at 300W, so you’ll need a fairly hefty PSU in your workstation. It gets its power from a special 8-pin connector, that is connected to two standard 8-pin PSU connectors via an adapter. It is cooled by two fans, top and bottom. There are four DisplayPort 1.4a connectors nestled below a heat sink.

Testing the Nvidia RTX A6000

AEC Magazine put the PNY Nvidia RTX A6000 through a series of real-world application benchmarks, both GPU rendering and real time visualisation.

The GPU is simply overkill for current generation CAD and BIM software, so we didn’t do any testing in that regard. However, it’s important to note that it will still be certified for the likes of Revit and ArchiCAD, which is useful if you plan to use those kinds of applications alongside more viz focused tools like Enscape, V-Ray and Lumion.

The full spec of the Scan 3XS GWP-ME N1-32T test machine can be seen below.
You can read a full review here.

For comparison, we used historic data from the Nvidia Quadro RTX 6000 GPU (457.09 driver), tested in a Lenovo ThinkStation P620 workstation with AMD Ryzen Threadripper Pro 3995WX CPU and 128GB RAM, as well as a Quadro RTX 4000. 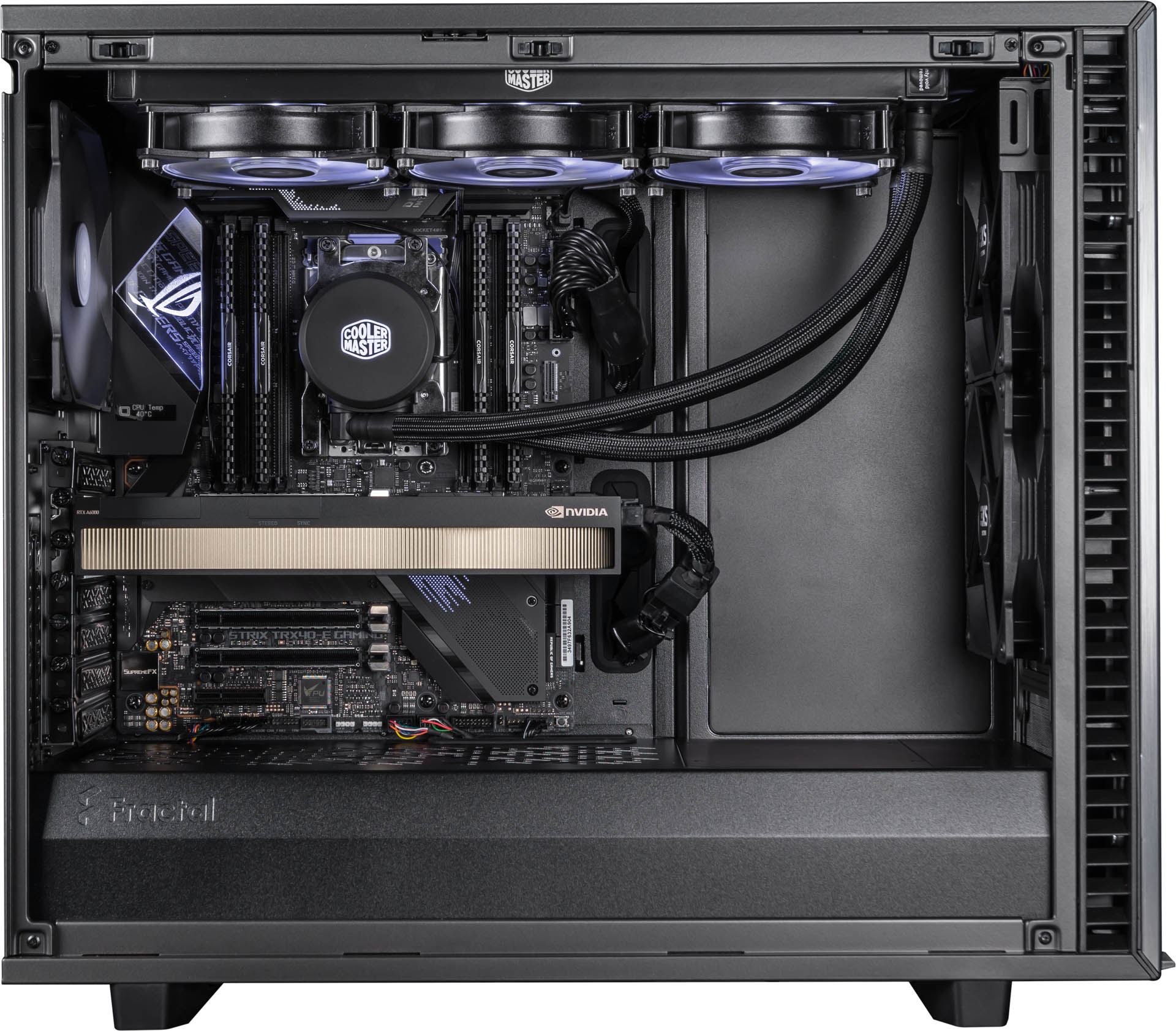 Rendering with the Nvidia RTX A6000

GPU rendering has now reached a stage where it is becoming ubiquitous. While renderers built into CAD and BIM applications still tend to rely on the CPU, most of the major design viz focused renderers now offer a GPU rendering capability.

This includes traditional ray trace renderers such as Chaos Group V-Ray, Luxion KeyShot and Solidworks Visualize, all of which can take full advantage of Nvidia RTX technology, including the dedicated Ray Tracing cores and Tensor cores for AI denoising.

Then there’s real time ray tracing tools like Unreal Engine and the new Chaos Vantage (formerly Project Lavina), which works with V-Ray scenes. (N.B. you can currently pick up a free one year licence if you register before June 2021).

As a side note, it’s important to check that your chosen GPU rendering tool supports the new Nvidia RTX A6000. Users of Solidworks Visualize 2021, for example, will have to wait until Service Pack 3 in April 2021 before they can take advantage of any ‘Ampere’ GPU.

V-Ray is arguably the No. 1 physically-based rendering tool for architectural visualisation. We put the Nvidia RTX A6000 through its paces using the new, freely downloadable, V-Ray 5 benchmark, which has dedicated tests for Nvidia CUDA GPUs, Nvidia RTX GPUs, as well as CPUs.

The results were extremely compelling, with the Nvidia RTX A6000 showing itself to be 2.32 faster than the Nvidia Quadro RTX 6000 in the CUDA test and 1.85 times faster in the RTX test. Considering this is just a generation on generation comparison, it’s a phenomenal leap in performance. 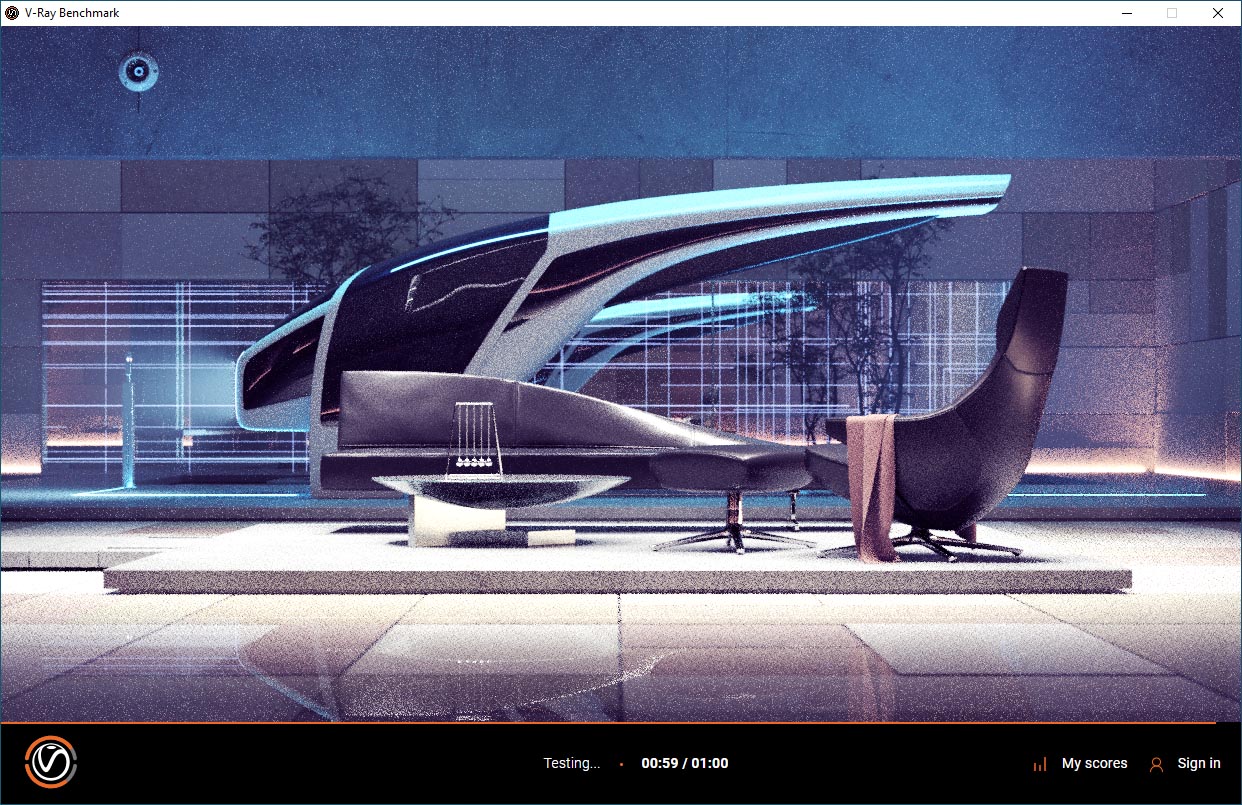 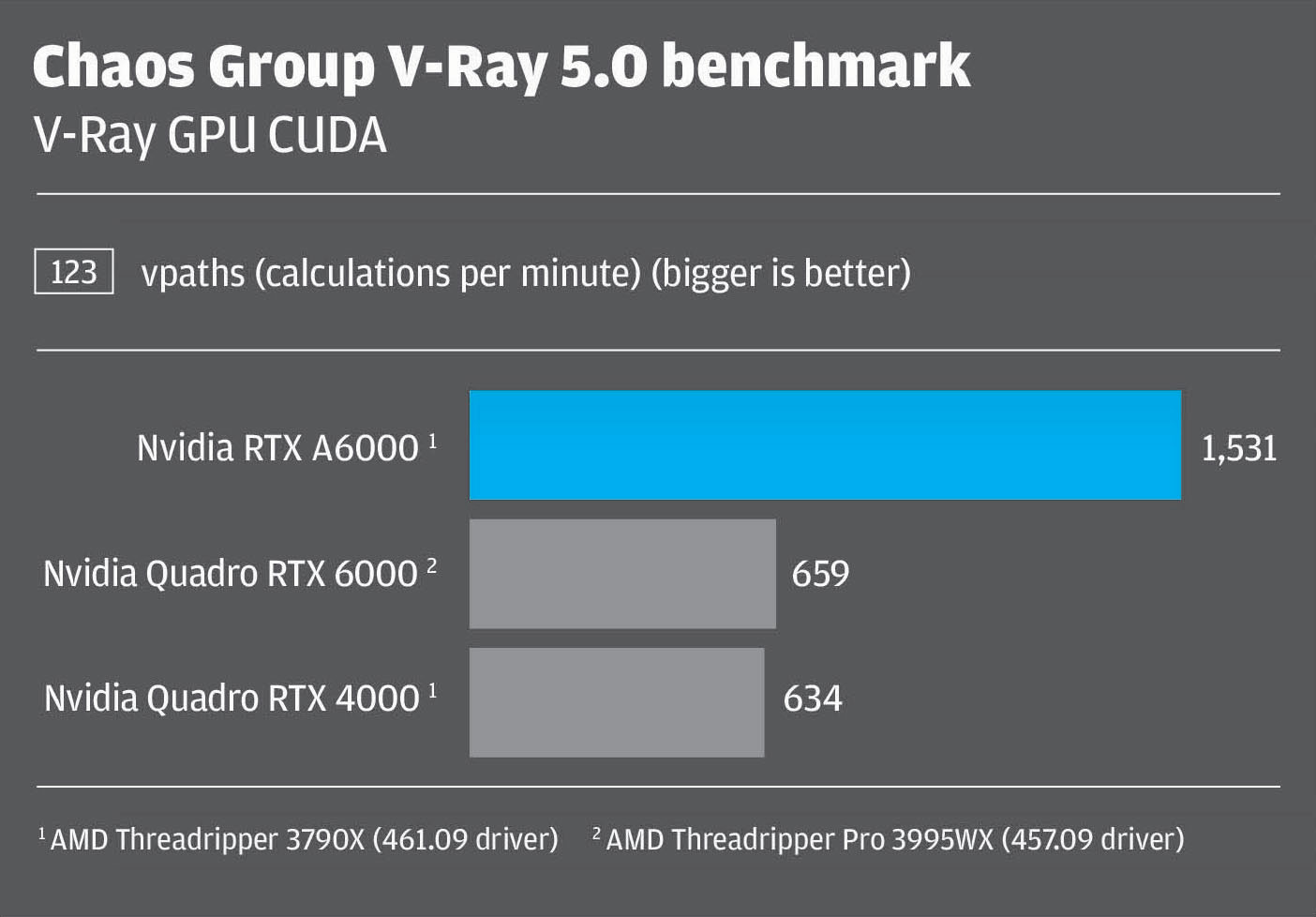 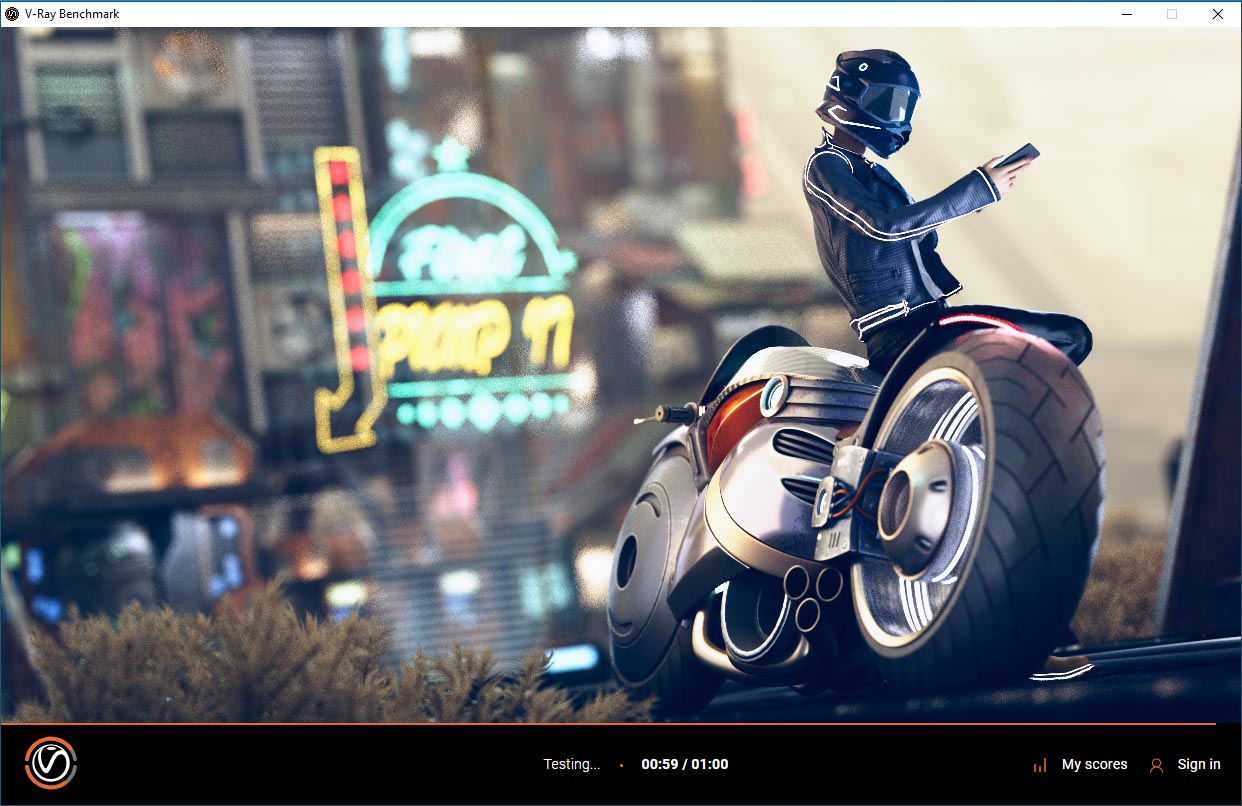 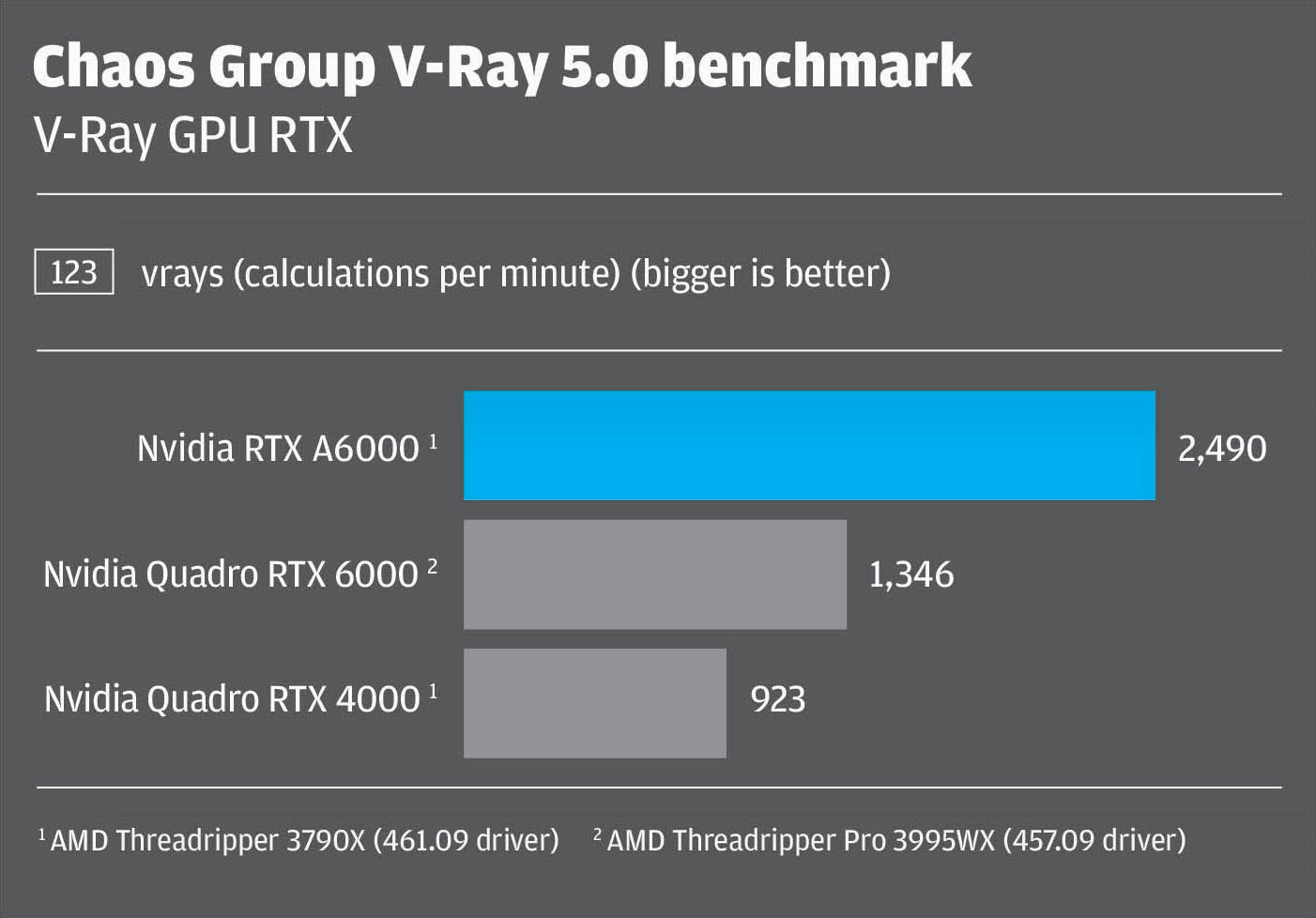 KeyShot, a CPU rendering stalwart, is a relative newcomer to the world of GPU rendering. But it’s one of the slickest implementations we’ve seen, allowing users to switch between CPU and GPU rendering at the click of a button.

In the Keyshot 10 benchmark, part of the free KeyShot Viewer, we saw similar results to V-Ray. The Nvidia RTX A6000 outperformed the Quadro RTX 6000 by a factor of 1.97. 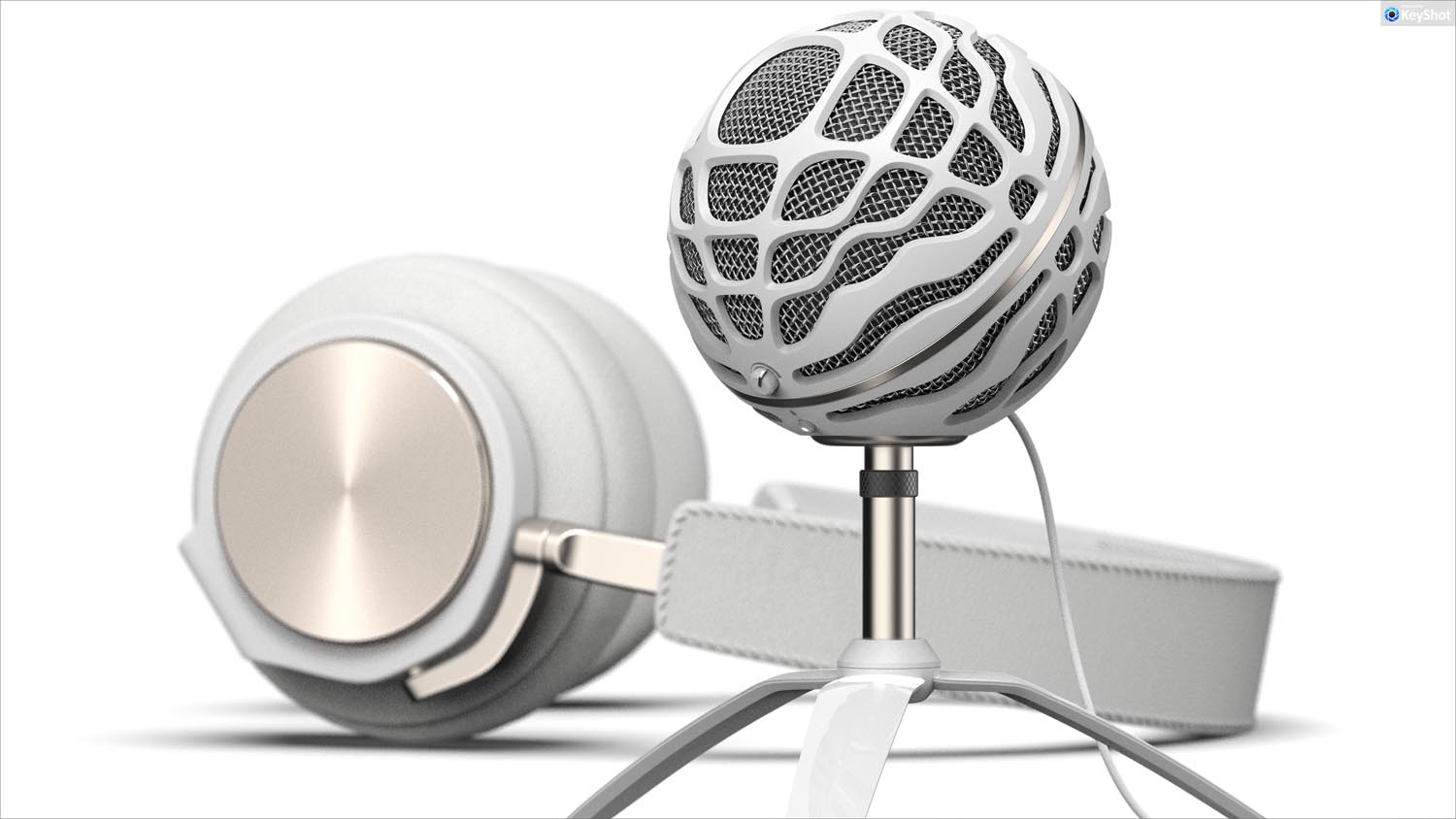 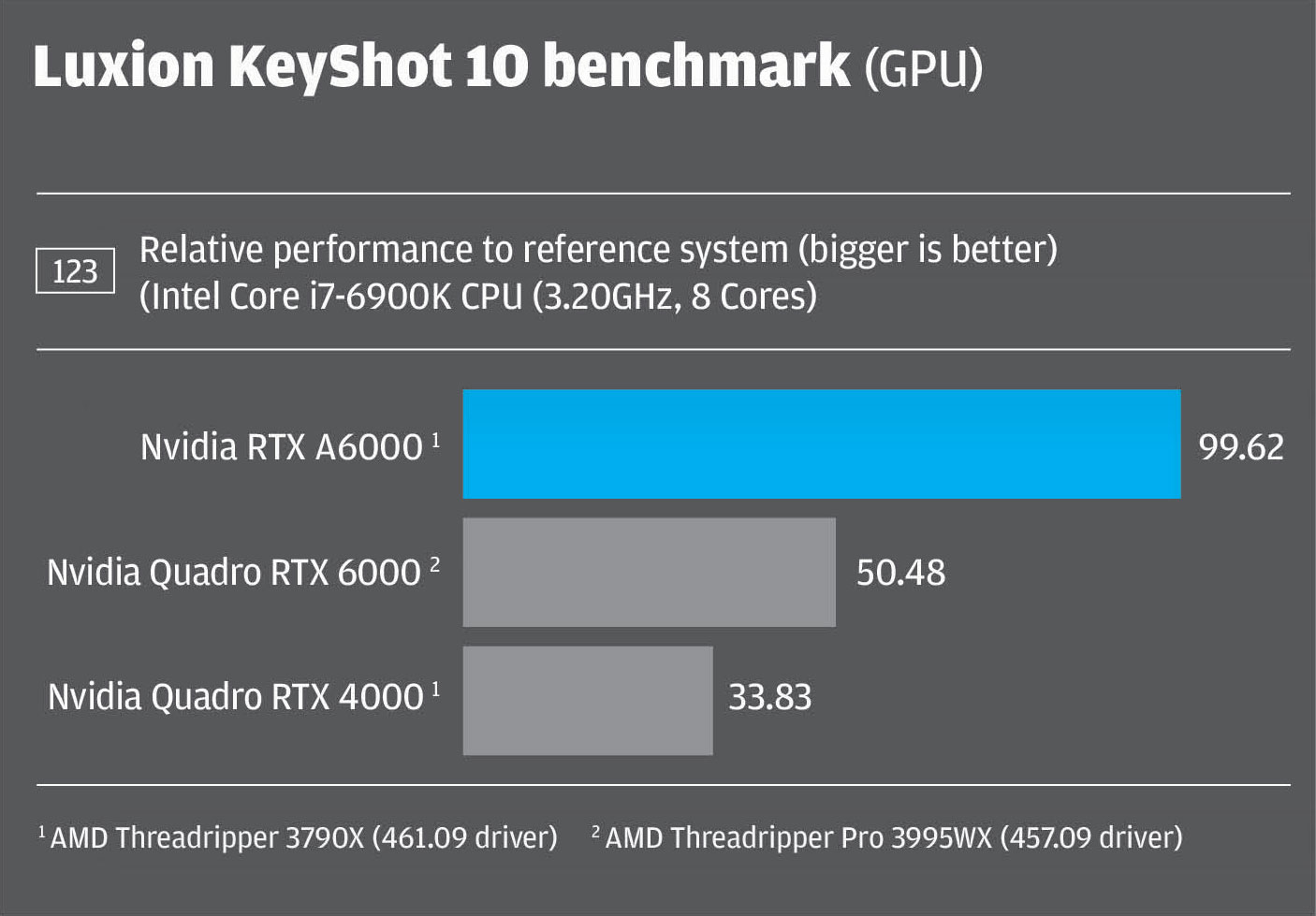 One aspect of technology that has long held back GPU rendering is the limited amount of GPU memory available on each card. When a scene, including geometry, materials and lighting, doesn’t fit entirely into GPU memory, the render can fail, slow down (if it runs ‘out of core’ using system memory), or simply fall back to the CPU.

There are many established workarounds to help users ensure a dataset fits entirely within GPU memory – such as resizing or optimising textures, simplifying or stripping out geometry, or rendering in separate passes – but all of this takes time to prep. What the user really wants is not to have to worry about GPU memory at all.

Of course, for some workflows 48 GB will be overkill. However, for those pushing the boundaries of realism, using very hi-fidelity textures (such as those captured from real-life scans) or colossal engineering accurate datasets, it should open up a wealth of opportunities.

Luxion, for example, has in the past reported ray tracing a KeyShot scene with 1.37 billion unique triangles using two Quadro RTX 5000 cards and NVLink for a combined 32 GB of memory.

Indeed, despite its designer-friendly workflows, KeyShot is doing a lot to break new ground. A new feature in KeyShot 10 called RealCloth 2.0 allows users to generate visually accurate woven materials using thread geometry. However, this can be incredibly memory hungry when using the option to represent each individual thread as a geometric entity, even with relatively small scenes.

Previously, we’ve explored this feature in our sister publication DEVELOP3D. Using a 16 GB Quadro RTX 5000, however, we quickly ran out of memory, with the scene falling back to the CPU to render. However, things were entirely different with the Nvidia RTX A6000.

With 48 GB to play with we were able to much better match the scale of the weave in KeyShot to that of the physical fabric. As you will see from the images below, the difference in accuracy, in terms of how the material is represented, is quite incredible.

Of course, RealCloth 2.0 is quite a niche example. However, there will certainly be some architectural or automotive visualisers out there that would benefit from 48 GB (or even 96 GB with two RTX A6000s over NVlink) now or in the future. You’ll know who you are.

While GPU rendering is a major play for the Nvidia RTX A6000, real time 3D using OpenGL and DirectX continues to be a very important part of architectural visualisation, with applications including TwinMotion, Lumion, Enscape, Unreal Engine and others. And, of course, the boundaries between real time 3D and ray tracing continue to blur.

To test frame rates we used FRAPS in combination with a 3DConnexion SpaceMouse to ensure the models moved in a consistent way every time. We only tested at 4K (3,840 x 2,160) resolution. At FHD (1,920 x 1,080) resolution this level of GPU simply isn’t stressed enough.

Enscape is a real-time viz and VR tool for architects that uses OpenGL and delivers very high-quality graphics in the viewport. Enscape has used elements of ray tracing in its software for some time. Newer versions of the software are RTX-enabled, so full ray tracing can be toggled on and off.

For our tests, Enscape provided a large architectural scene of a museum and its surrounding area. At 7.5GB, the GPU memory requirements of this model are relatively high, but Enscape models can take up much more and this is a drop in the ocean for the Quadro RTX A6000. 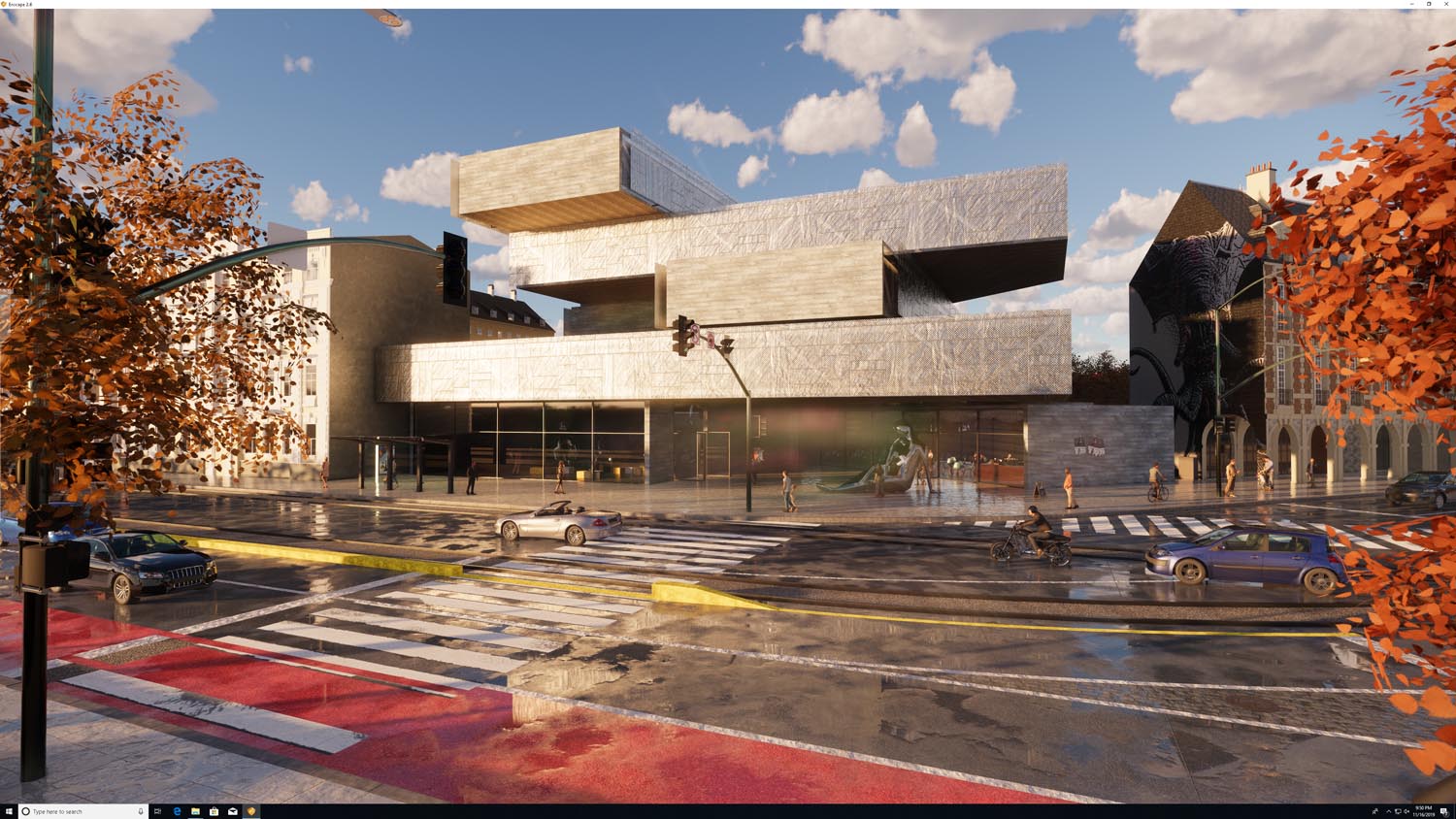 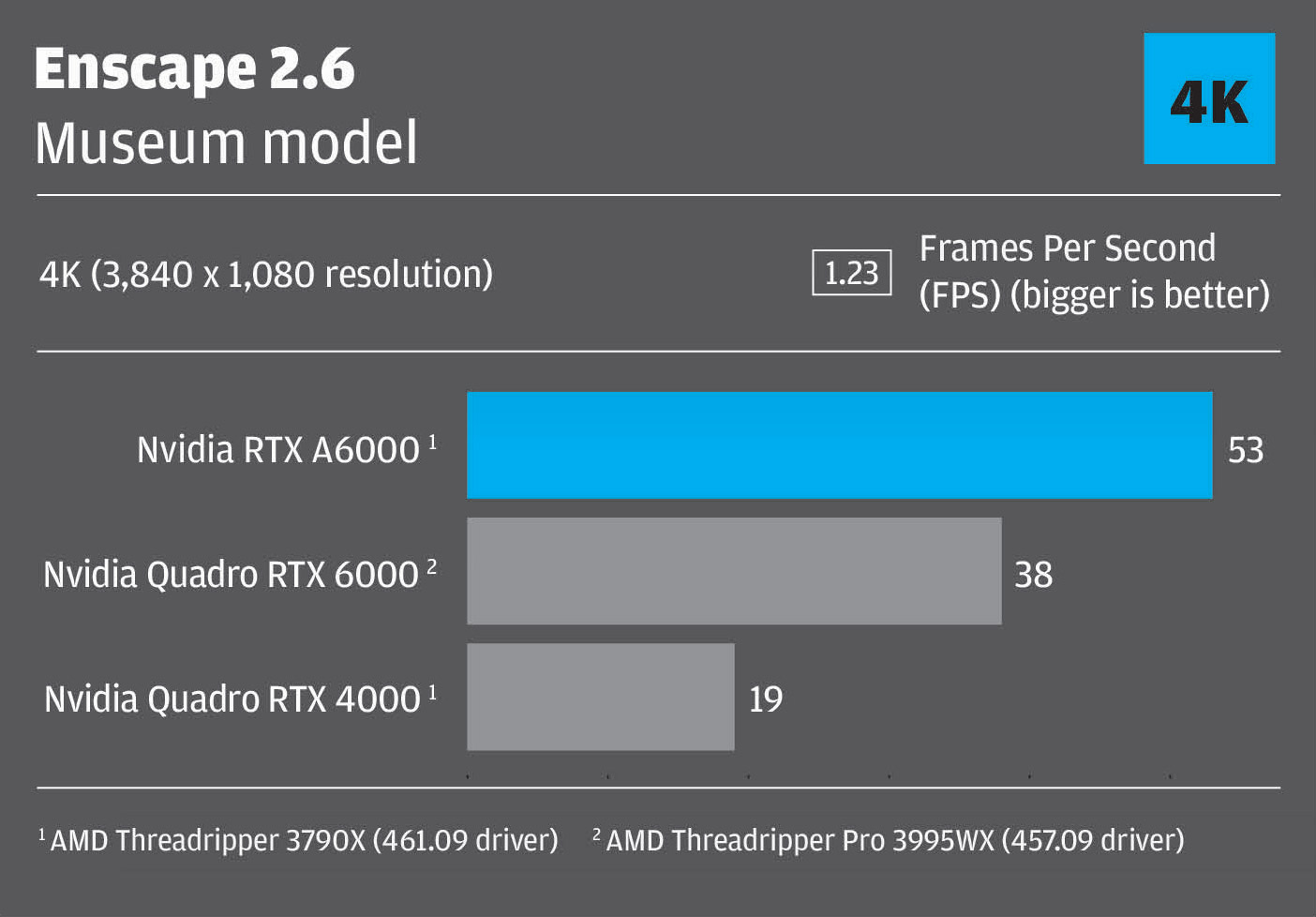 Autodesk VRED Professional is an automotive-focused 3D visualisation, virtual prototyping and VR tool. It uses OpenGL and delivers very high-quality visuals in the viewport. It offers several levels of real time anti-aliasing (AA), which is important for automotive styling, as it smooths the edges of body panels. However, AA calculations use a lot of GPU resources, both in terms of processing and memory. We tested our automotive model with AA set to ‘off’, ‘medium’ and ‘ultra-high’.

The Nvidia RTX A6000 was significantly faster than the Quadro RTX 6000 delivering between 1.46 and 1.50 more frames per second in all of our tests. Most notably, the card delivered a very smooth 25.15 FPS when AA set to ‘ultra high’, which is unheard for a model of this complexity. This is 2.97 times faster than a Quadro RTX 4000. 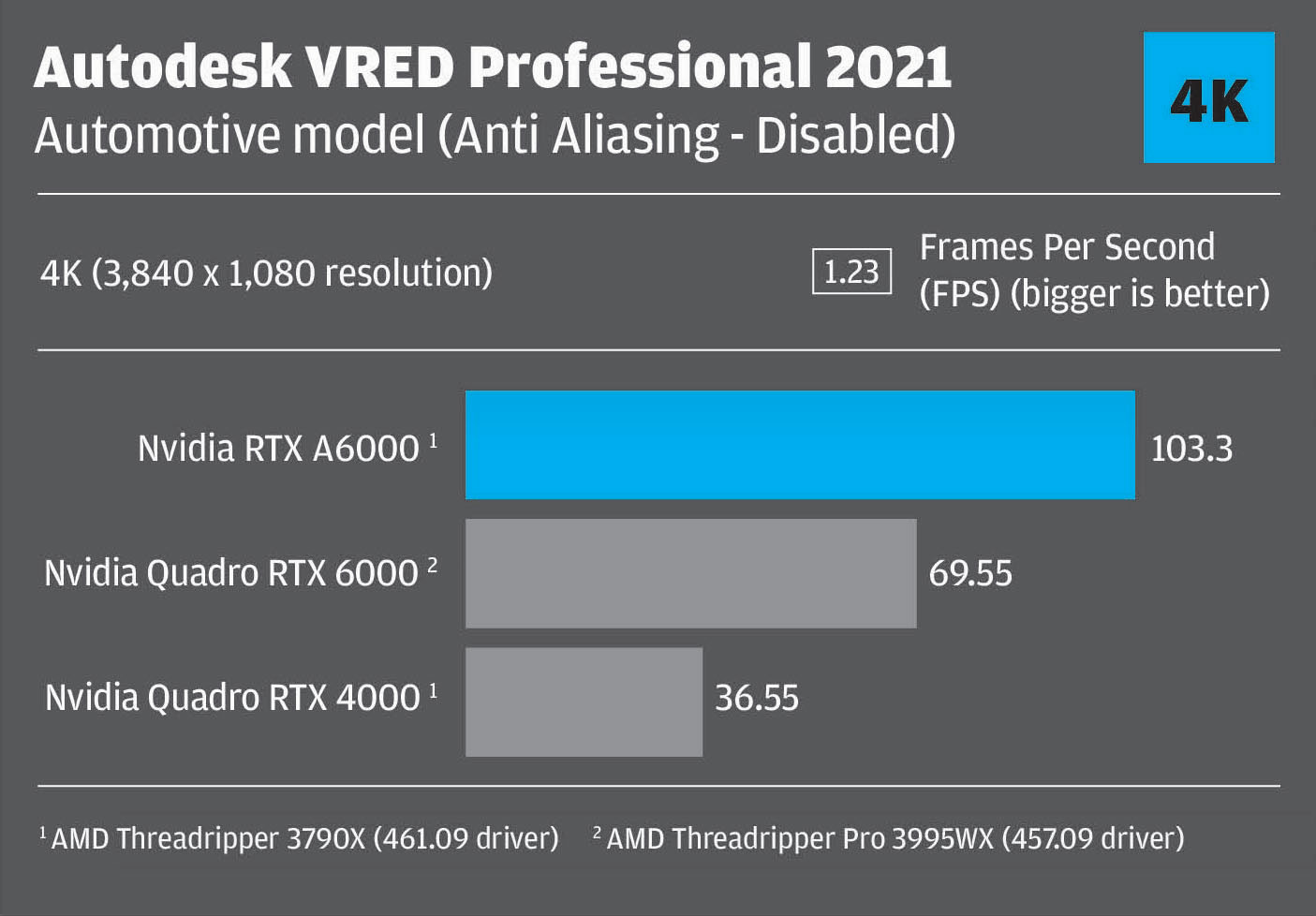 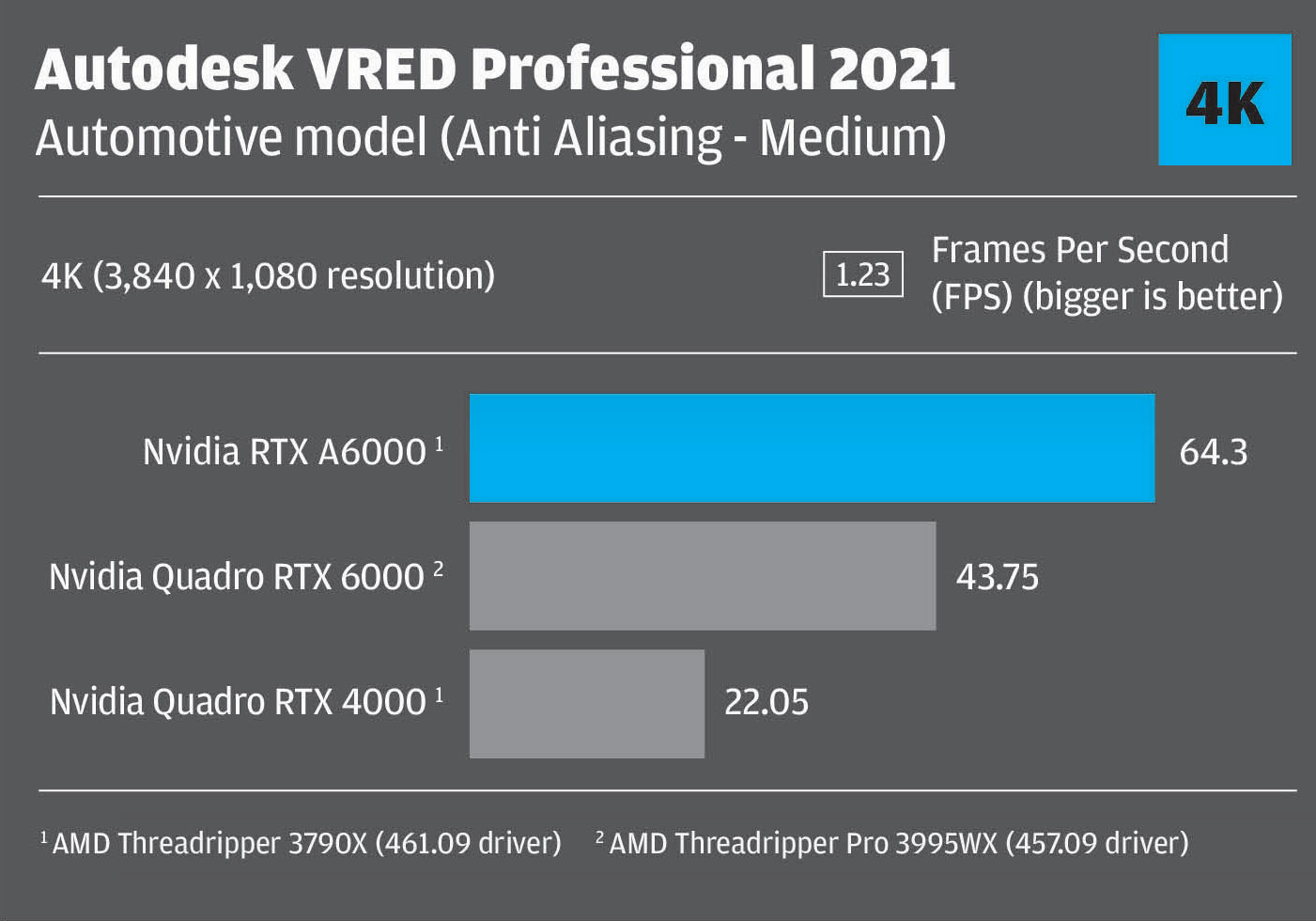 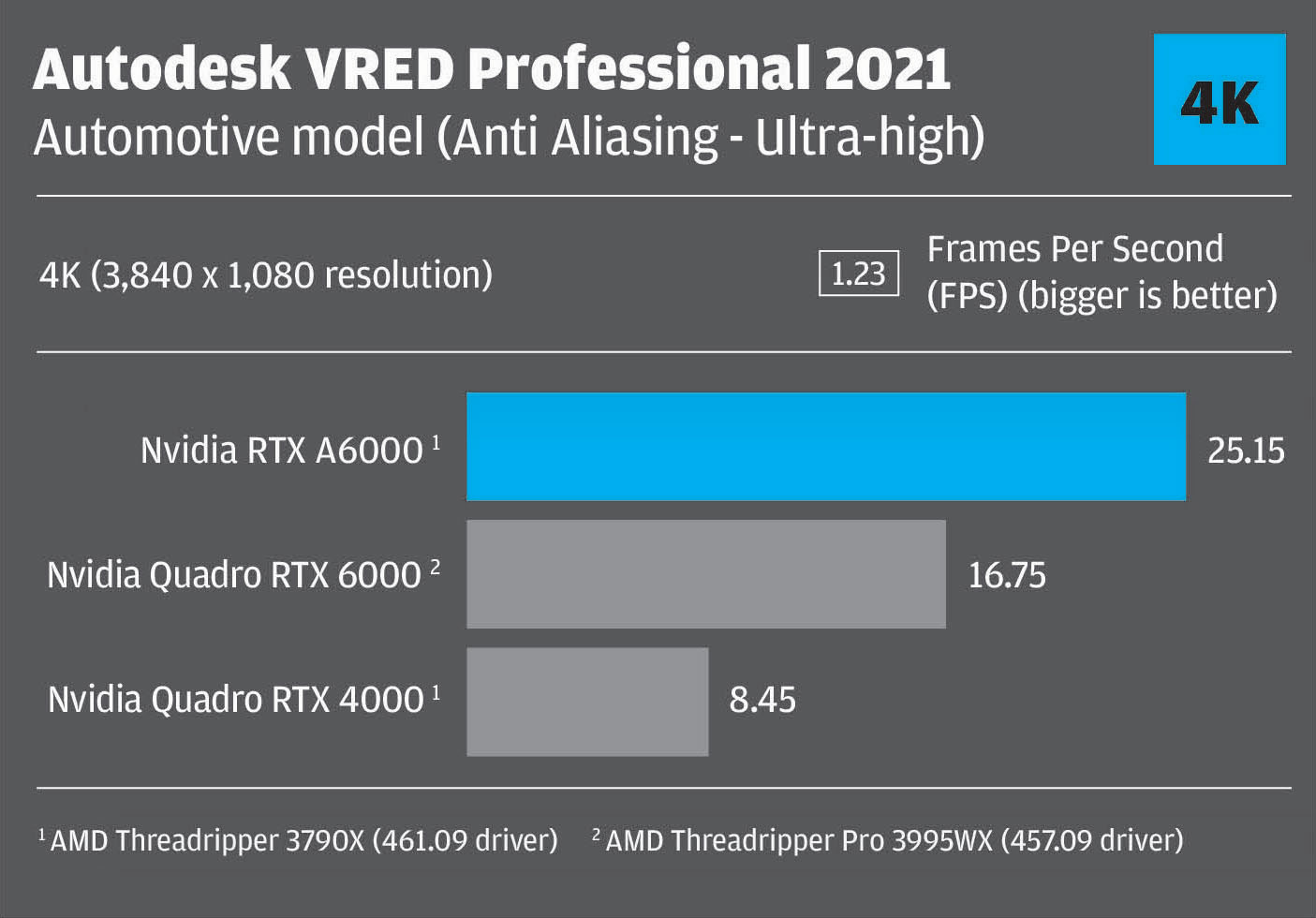 Nvidia has put a huge effort into developing its hardware-based ray tracing technology and it’s now really starting to see the fruits.

It’s quite incredible to think it has managed to double the GPU rendering performance, generation on generation (Turing to Ampere). And, with a 1.4 to 1.5 boost, it’s hardly dragging its heels in real time 3D.

Rendering has become the big battleground for hardware manufacturers and, with the 64-core AMD Ryzen Threadripper CPU, competition between GPU and CPU has never been so fierce.

CPUs have always had the lead when it comes to addressable memory and there’s an ongoing debate about rendering performance vs accuracy. But with 48 GB per GPU, and the ability to scale up cards as and when required (the new Supermicro SuperWorkstation 5014A-TT can support up to four Nvidia RTX A6000s), the argument for GPU rendering has never been more compelling.

In many ways the biggest competition for the Nvidia RTX A6000 is from Nvidia itself. The consumer-focused Nvidia GeForce RTX 3090 should offer roughly the same performance for one third of the price. It does have half the memory (24GB) but with support for NVLink, two can be linked together to create a virtual 48 GB render resource. The downside is – it’s currently nigh on impossible to get hold of a board and prices are inflated.

Of course, for some firms it will always need to be Quadro all the way. Or should we say Quadro in features, warranty, reliability and certification, but not in name. It’s going to take some time to get used to the rebranding.