We are told next generation design tools will use Artificial Intelligence to automate mundane repetitive tasks. Some AIs will even automate the detail design phase of a project. Martyn Day spoke with Franceso Iorio, CEO of Augmenta

In the process of researching the oncoming changes which AI technology will bring, one firm, Canada-based Augmenta was aiming to do what few others could do – to automate detailed, co-ordinated and sustainable design for electrical, plumbing, mechanical and structural elements within a building. If this works, then it could radically shorten the detailed design phases of those elements and, should changes need to be made, the AI would update the layout of those key building elements.

Currently, BIM is all about producing a model to generate drawings. When it gets to construction, another BIM model is typically made and then if components need manufacturing, a mechanical CAD tool like Solidworks, Catia or Inventor are typically used to generate a 1:1 fabrication model. This is a fragmented and broken process. Design BIM needs to better feed Construction BIM and fabrication tools need to interface better with construction BIM. This work is happening, but can only really be seen in bespoke developments.

Developments by Bouygues and Dassault Systèmes have demonstrated a system where a Revit model is dropped into its Catia model environment (traditionally used for aeroplane and car design) and the whole building is converted into a fabrication model with 1:1 drawings for every component. The system goes further, only defining elements like wall panels which it knows can be manufactured with current Bouygues equipment, with total material cost. This is fantastic stuff, but it is an expert system, bespoke programmed for Bouygues’ processes. How about something for mere mortals?

Franceso Iorio is a computer scientist who used to work at Autodesk in the research division. While there, he formed a group to look at generative design in mechanical engineering. At the time, Autodesk was in a gunfight with serious industry players like Siemens, Dassault Systèmes and PTC. It was hoped that the development of a generative design capability would help them leapfrog the competition. The technology and product that came out of that work was called Dreamcatcher and it has been used in all sorts of ways to optimise manufactured parts from NASA spacecraft to bicycles. (Read more about it in our sister publication DEVELOP3D). 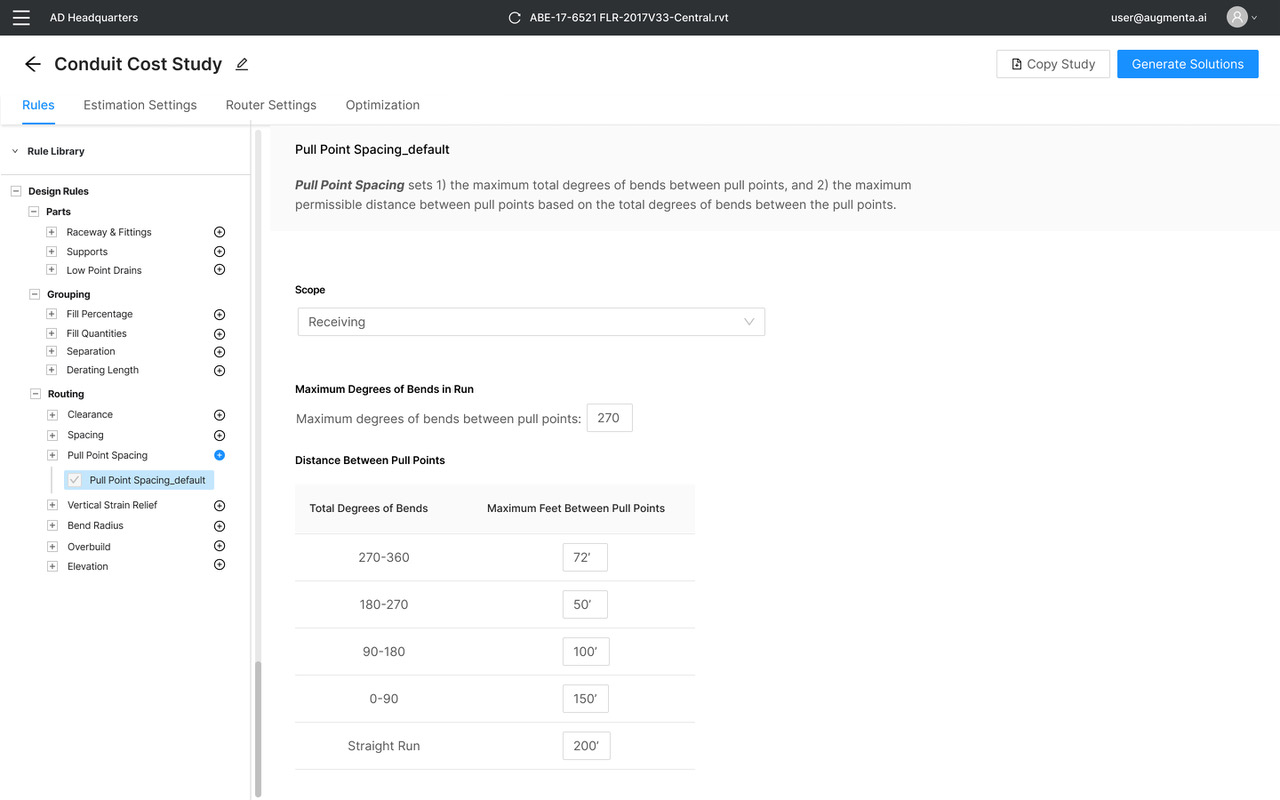 After ensuring that Autodesk’s mechanical team had what it wanted, attention turned to construction, as Iorio explains. “We quickly realised that, while valuable, floor plan design is not the ultimate opportunity of generative design. Everything that the system designs has to be, by default, manufacturable and constructible, as well as able to provide important information about the cost and performance of a given solution in order to reduce uncertainty. True generative design produces actionable, executable and valid designs, while functioning as an aid to decision making rather than a simple drafting board.”

Iorio’s team shopped the idea around Autodesk, but there was only so much traction. “We decided to try to do it ourselves,” he says. This led to the formation of a new company Augmenta in 2019, with Iorio as CEO.

Iorio’s team partnered with contractors, starting as close as possible to the field, in the actual fabrication shops, and deployed into the field and building sites. This enabled them to analyse what processes they need to operate effectively, and then to work backwards from there to come up with the design of the application.

Augmenta has a very clear mission: to design buildings automatically, as Iorio explains, “The architectural design process will be supported with its own dedicated tools, so that architects will be able to continue to deal with spaces, layouts and facades using absolutely anything that they want in order to express the form and the functionality of a design. However, the engineering will be greatly automated.

“The future that we foresee, is not one where there are scores of design engineers modelling individual ducts or individual bits of conduit, unless they want to do special modifications or operations. For all intents and purposes, most of that detailed design will be done automatically.

“We are starting with automating electrical design for two reasons. The first being that from a purely technical perspective (in terms of our approach to using AI and mathematical optimisation), we figured that when we solved the electrical problem, we would have solved most of the underlying technology for piping and HVAC as well. The second reason is that the problem of electrical system design has special characteristics (such as finding the optimal groupings of wires within raceway) driven by rules set out in the US National Electrical Code and national codes all over the world. Some of these rules are much more complex to guarantee compliance than those in piping or HVAC. Proving that we can do electrical raceway design proves that our approach is sound and can scale to take on much of the core engineering tasks in MEP and structural design.”

It’s interesting that Augmenta is taking a systems-based approach to implementing artificial intelligence. Out of all the elements that can be predictable, and are based on real world values like heating, occupation size, power needs and lighting, automatic routing is quite common in disciplines such as Process & Plant, ship building and even aerospace.

In the last ten years there have been huge advances in automatic wiring of cable harnesses in MCAD systems for vehicles and electromechanical devices.

Iorio is aiming to bring this capability to AEC. “Our electrical module is almost ready; we can demo it. We have announced our pilot program with a handful of selected organisations. In terms of how we approached the design of this new workflow, it was never our intention to go away as a group of software engineers, create something in isolation, and then parachute it into the industry! We wanted to learn from the perspectives of the field leaders, designers, and engineers, and to learn how they would interact with something like this — a workflow geared towards decision making and the exploration of options.”

Augmenta’s software plugs directly into Revit, so it can integrate with the traditional workflows that people are currently using, as Iorio explains, “We can deal with both IFC and Revit files – but we use Revit only as a lowtouch, input and output interface. The entire geometry model, the database, and everything behind the generative design system sits elsewhere in the cloud.

Architects will be able to continue to deal with spaces, layouts and facades using absolutely anything that they want in order to express the form and the functionality of a design. However, the engineering will be greatly automated

The system is actually agnostic, and we have already integrated with several other systems for real time pricing and supply chain information.” The system is being designed to support a wide range of building types. “Most of our testing so far has been on industrial and commercial facilities, but the principles can be carried over to almost any project type,” adds Iorio.

Given the site geometry and the location and the electrical specification of sources and loads in the model, the system generates a number of coordinated, code-compliant raceway designs, “We read into the system all of the electrical information about the plant or the building, with equipment locations indicated in the 3D model, and then we do everything else. The system determines the gauge of the wire based on the load, voltage drop and derating calculations, determines the correct grouping of wires into raceway based on a number of considerations, and fully routes and details the solution. 4

“The system produces fully detailed designs, placing the correct fittings, conduit bodies and supports – working at a level of detail unmatched by other generative design solutions. We know a few of the other companies out there doing some form of generative design in BIM. Our differentiator is the level of detail at which our system operates. We don’t output something that gives you an idea of a solution, or massing or volume; the system literally identifies the bucket of parts you must buy and tells you where to put them, with all the compliance handled behind the scenes.”

In addition to using RVT or IFC files as inputs, system designs can also be output and put back into Revit. The company uses its own proprietary geometry format on the cloud and solutions will be previewed online in their indevelopment viewing app, and then exported to Revit along with the bill of materials as an aggregation of all the families that the system has created.

Iorio explained that, to date, nearly all generative design systems have been applied to the conceptual part of the design process, for exploring massing and architectural forms.

Augmenta is coming at the use of generative design from a very different angle – applying it to the detailed design of the project and defining systems from standard parts, in IFC. By using IFC, it allows the company to apply its technology to any current or future BIM modeller or system that can interpret the schema. Iorio used the term ‘agnostic of any of the incumbents’, which struck a chord.

Iorio sees an opportunity for Augmenta to democratise the adoption of BIM. Today, he believes smaller contractors and engineering firms are the least ‘BIMmedup’ firms in construction and probably the least likely to buy Revit, and are based in 2D. Iorio really feels his technology will level the playing field, “BIM is an extraordinary tool on paper, but it’s solidified more in standards bodies and workflows than in tools. The tools are just there to fill in the information to conform to these standards. BIM has limits to its penetration because of cost, in terms of resources and expertise, without even considering the cost of the software. Below a certain size of organisation or projects, BIM makes little sense. We have talked to contractors here in the USA, and they tell us 50% of their projects don’t use BIM, as it doesn’t make commercial sense. The promise of our platform is to deliver an entire automated design process as a service, lowering the barrier to adoption and enabling these smaller firms to reap the benefits of BIM without the cost.”

While securing funding, Iorio’s team demonstrated their system using as an example, a building with a raceway design. They then moved the electrical room from one side of the Revit model to the other, and pressed enter. In 15 minutes, the whole new detailed design was generated with all the raceway and cables re-routed.

AI is going to touch all aspects of the design and operation of buildings, from assisting in generating concepts, to working out what component is going wrong in a building from various live sensors. This isn’t 22nd Century technology, it’s going to be common in the next 5-10 years. Augmenta is about to enter a small beta and I suspect will be focussed on North American buildings and processes first. Hopefully Europe won’t have to wait too long.