Technical products for detailed design & documentation are well developed, and yet conceptual design products remain in the shadows. But this is changing. By Martyn Day

Historically, conceptual design has been poorly served by CAD software developers. Many Building Information Modelling (BIM) design tools were first sold to improve the process of creating co-ordinated detail drawings, with features like massing and simple geometry manipulation failing to appear for years.

There is one notable exception — a product called SketchUp, launched 15 years ago by a small company called @Last Software. SketchUp was low cost and with an easyto-use ‘push / pull’ 3D modelling environment it built up a solid user-base.

Google acquired the software in 2005 and made the base product free, which helped get many architects into modelling and subsequently BIM. It was a necessary and welcome industry catalyst and it is still one of the most popular 3D modelling tools used by architects.

In 2012 Google sold SketchUp to Trimble. The company is currently fleshing out the modelling and documentation tools and offers an HVAC add-on, together with a range of third party apps in its store.

In some ways the success of SketchUp and its low cost dissuaded competitive development until relatively recently.

With the rise in use of mobile devices and more ‘push / pull’ modelling interfaces there have been a number of recent innovations in sketching and concept modelling.

With the new generation of powerful tablet computers, specifically the Microsoft Surface Pro and Apple iPad Pro, software developers are now starting to explore sketching and modelling tools with more intuitive interfaces than those of their desktop cousins.

Autodesk has a number or 2D tools, the best being SketchBook Pro. Others include Adobe Illustrator Draw, Paper by fiftythree and Bamboo’s Paper to name a few. One of our favourites is Morpholio, which offers a suite of eight applications for the budding 2D artist.

Gravity Sketch develops 3D modelling tools for complex shapes. It also links to the Shapeways 3D printing service and models can be shared on 3D content portal Sketchfab — all from a tablet. The software looks quite interesting for form finding and fabrication of small models but currently lacks industry-specific tools. 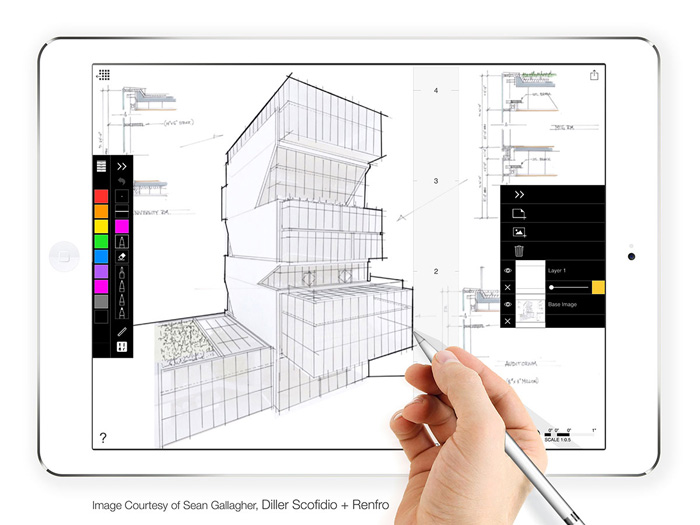 Most of the systems we have mentioned are predominantly aimed at replicating the 2D sketching process. Autodesk, however, has a mobile and desktop architectural concept tool, Formit 360, which is a Revit-friendly modelling tool with added analysis. It could be seen as Autodesk’s attempt at competing with SketchUp.

Formit 360 Pro offers building energy analysis, solar analysis, shadow studies and building cost indicators. Teams can also collaborate and share models for critique. By linking it with Revit these models can act as useful start points for the complete design and detail process, thus preventing BIM managers from getting frustrated with architects that keep submitting design changes in the form of SketchUp models that need to be remodelled in the detail design system.

Of course another option is to do massing inside the core modelling and detailing environment. While early ‘BIM systems’ lacked the capability to do this, complex geometry creation has improved, and most tools now have the ability to easily create complex forms beyond mere rectilinear.

Autodesk Revit, Graphisoft ArchiCAD and Bentley AECOsim all have massing tools to rough out volumes and levels. This saves the hassle of converting data from proprietary conceptual modelling tools.

However for advanced users this is still not good enough. When building components have complex forms or intricate parent / child relationships with surrounding components, such as glazed curtain walls, guttering or sun shades, editing a 3D ‘BIM’ model is often just too complex.

McNeel Rhinoceros (Rhino), another thorn in the side of the larger AEC software developers, is a very popular choice for conceptual design, especially for buildings that feature complex surfaces. It is widely used by London’s internationally famous architects, relatively inexpensive, and has its own ecosystem of advanced, yet affordable, add-ons.

Nearly every BIM tool has a Rhino import capability. However, it is not just its native surface-modelling functionality that impresses; Rhino is leading the most exciting developments in script-based modelling as well.

With computational design the computer has the potential to take some of the workload away from the designer. It handles all of the geometry complexity and component relationships, while at the same time potentially optimising the design through analysis.

Essentially, computational design applications reduce the risk of handling complexity by allowing the computer to update models based on user-programmable rules, which define the layout of a building.

Should a complex model with dependencies and relationships need editing then the computer would regenerate the design ensuring these codified rules were obeyed.

These tools are so powerful that they are enabling new architectural vocabularies that can be seen in the works of practices such as Zaha Hadid and Foster + Partners. Rules-based computer-driven geometry lowers risk in design, links well to CNC (Computer Numerical Control) machines for fabrication and can enable late-term changes to projects, driving details and documentation without human intervention.

The first company to champion these kinds of tools in the mainstream was Bentley Systems with its Generative Components (GC) scripting environment.

This was followed by Grasshopper for Rhino, which quickly became the mainstream computational design solution. Recently Graphisoft started to support links to Grasshopper within ArchiCAD to drive its BIM geometry. Grasshopper is the de facto standard for college students and is heavily utilised in many conceptual teams as a way to explore designs and drive complex forms. In the beginning Bentley’s GC tool was driven by writing scripts, so Grasshopper made a huge ease-of-use lead by providing a plug and play visual interface which would create the scripts in the background.

Autodesk has also launched Dynamo Studio, which has a similar visual scripting interface to Grasshopper and can be used to drive Revit, Navisworks, Robot Structural Analysis Professional, Excel, Rhino and other applications.

Dynamo’s ability to link to and drive geometry in Revit is getting a lot of positive attention as those firms that want to use Revit for documentation and modelling now have a much more capable and complex modelling system.

As Dynamo also supports the Python language, scripts written for Grasshopper can also be re-used in Dynamo.

Nearly all BIM systems were originally designed as a better way to create 2D documents that the industry relies on and is still largely contractually obligated to deliver.

2D drawings are inherently dumb — they may not be accurate, may miss information, and could become uncoordinated through a change-driven design process or on-site feedback.

The BIM model with its single version of the truth driving the 2D sections, elevations and details should, in theory, be co-ordinated and always reflect the state of the actual live design. This link dies once drawings derived from a BIM system are dropped into a ‘dumb’ 2D CAD system and edited.

Improved 3D for complex geometry is a relatively recent enhancement to BIM modelling tools, thus Rhino was always finding a use in projects. In fact many computational purists feel that today’s BIM systems are merely ‘Lego CAD’ and are limited to ‘best fits’ to create functional rectilinear mundane buildings like offices or schools — not ‘real’ architecture. However the available systems have become a lot more flexible in the last five years and there are ways to model pretty much anything.

Today’s BIM tools still do not play well with manufacturing systems out of the box. Rhino, for example, has a much better direct manufacture processes.

A number of expert practices are finding the 2D documentation part of the process is looking increasingly archaic as sharing the 3D model with a fabricator is much more explicit than sending a collection of 2D drawings.

Architect Frank Gehry had trouble getting his buildings made as he used to supply 2D drawings to contractors who would always add a large fee to the bids as they had to try and work out how the complex forms fitted together. Once he started sending a 3D model, the contractors’ costs all came in lower and to within 1% of each other.

As computational design systems lower the risk in complex designs, and as new architectural forms become part of the visual vocabulary, traditional architects are going to have to grasp 3D tools. With advances coming in robotics, prefabrication, 3D printing and modular construction, AEC design systems will add direct manufacturing design capabilities and drawings will increasingly become less relevant to the process, as is happening in the engineering world.