BentleyÝs annual customer event was held in Baltimore this year. Called Bentley Empowered, the main focus was on Sustainable Infrastructure; environmental challenges and opportunities ahead for construction. Martyn Day reports.

Starting last year at Autodesk University and moving doggedly onwards, the Green bandwagon has quickly made its way across the prairie of every CAD vendorÝs conference agenda. That is not a complaint, I am really happy that this is the case, as talking about the problem is perhaps the start of addressing the global issues that we face

Going ÙGreenÝ is a great opportunity for all software vendors to add great analytical functionality to their products. After having acquired so many of the leading analytical developers Bentley has great potential to provide essential products to assess design performance and environmental impact.

Bentley is also an important CAD vendor to get involved in this messaging, due to the kind of clients it has. While it may have substantially less seats sold than the volume empire of Autodesk, BentleyÝs corporate customers get involved in huge multi-billion dollar markets and projects. This represents Big business reacting to the market conditions and the implications of Ùsustainable designÝ, even before thereÝs much of a legal infrastructure to enforce it.

This was the second time that Bentley had brought its customer event to Baltimore and this year the company worked hard to do its best to earn its green credentials. It turns out that 65% of local Bentley colleagues travelled to Baltimore via bus or carpool and only hotels within walking distance of the Baltimore Convention Centre were contracted for attendees.

There was the onsite recycling name badges and lanyards at BE Conference and the brochure printed on Forest Stewardship Council (FSC) certified paper. The registration counters were seeing their third year of usage and water jugs and recycled paper cups were everywhere! Bentley has committed to reducing its carbon footprint by 15% before the end of 2009, based on its 2006 levels.

The first morningÝs keynote addresses were an interesting mix of Bentley execs and a Green business guru, Andrew Winston, author of ÙGreen to Gold ¾ How smart companies use environmental strategy to innovate, create value and build competitive advantageÝ. 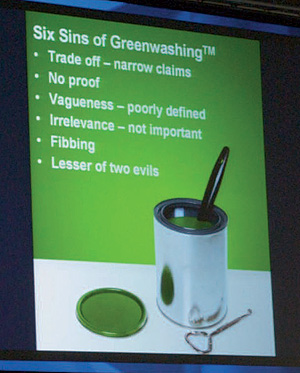 The Ùsix sinsÝ of greenwashing. Make sure your actions reflect your marketing.

CEO Greg Bentley was up first to report on the companyÝs performance, outlook on sustainability and the challenges the company faces. Greg Bentley said that Sustaining Infrastructure was not just a buzz-term or new mission but an enduring commitment for the company.

Bentley talked of how he believed that sustaining our environment is not incompatible with sustaining our economies, given the necessary infrastructure investments. He added, ýIÝm a believer in global markets, so I personally believe that the financial returns on infrastructure investment ± exemplified by the opportunities in clean energy self-sufficiency, efficiency, and conservation ± are sufficiently high that these investments will inexorably be forthcoming.

ýI even believe that these superior returns will motivate continued institutional reforms to encourage public-private partnerships in those infrastructure domains that have been traditionally funded only through taxation. I have no doubt of the multiplied opportunities that lie ahead for all of us, as a result.¯

On the companyÝs performance, Bentley Systems has generated continuous revenue growth, at a compound annual rate of 14% over the past 15 years. In 2007, it had revenue growth of nearly 16%, to $450 million.

As Bentley is the largest privately-owned software company in the USA it does not have to report to the markets, so this yearly report is the main source of BentleyÝs annual performance. The company has 2,800 employees working in 51 countries, with the majority of its business and employees being outside North America. Greg Bentley also said that over the past 15 years the company has invested over one billion dollars in R&D and acquisitions. Following on from Greg BentleyÝs belief that sustainability can be achieved without impacting business, Andrew Winston came on stage to highlight companies that are doing just that.

Maybe itÝs my European sensibilities that found the whole profit from going green a little distasteful but WinstonÝs presentation did slowly win me round, or at least explain to me how a capitalist mindset can justify what needs to be done and how business must adapt.

In Europe we are used to Government intervention and legislation, while America still prefers the free market and less interference with business.

In the UK we have Part L of the building regulations driving environmental design, while the US has LEED accreditation which is completely optional.

Building regulations in the US also vary from city to city. That said, the US Federal Government and some cities (3,500 mayors) are stipulation LEED compliance on tax-payer funded projects. Winston was especially scathing of companies that marketed green but were in fact brown ¾ highlighting one example of a garbage (rubbish) bag company that claimed to have bio-degradable plastic sacks.

To degrade they required sunlight, so in a landfill they had little chance of degrading! Winston was all about building an ÙEco-advantage mindsetÝ ± this may well be business-guru babble but I figure anything to get the pure-business minded on-board is a good thing. We were given a copy of the book and IÝve started to read it, despite my early scepticism. As if looking for a reward for recycling the use of the word ÙsustainableÝ to new levels, Keith Bentley, CTO, took to the stage and talked about Sustainable Software. I thought that this was going to be a hammer-hit too far on the sustainable nail, but hey, this is Keith Bentley and Keith doesnÝt do marketing waffle!

In fact, Keith Bentley made a very interesting pitch explaining the long-term view to development that Bentley takes versus other companies that were not mentioned. Bentley rarely gets the recognition that it deserves for its technical prowess in limiting customer pain by rarely altering the file format, actively supporting other vendorsÝ file formats as native and generally providing stability of its platform. 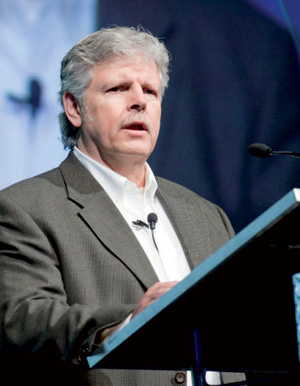 Buddy Cleveland is Senior Vice-President of Applied Research also spoke at the event.

This is absolutely essential given that the kind of projects that MicroStation gets used on can last years, if not decades. Keith Bentley recommitted to continued development without the pain. As is usual with KeithÝs addresses he gave some insight into future hardware requirements: dual if not multi-core machines, Windows Vista and 64-bit.

The next release of MicroStation, due Q4 2008, got another airing. IÝm sorry thereÝs no pictures of it here, I did ask, but I was told Bentley were not promoting it yet, despite showing it to 6,000 people last month and 6,000 the previous year in BE, Los Angeles. Athens will be mainly an under-the-hood release with re-architecting for consistency of big datasets, federated distribution, complex workflows, user interface, breadth and depth of services and functionality.

This wouldnÝt be a Bentley report without something on Generative Components (GC). The big news on GC wasnÝt launched at BE but a few weeks prior at the American Institute of Architects (IAI). Called the Discovery Subscription programme, for $250 (if you are in the US), you can download MicroStation and GC and learn all about the innovative parametric design application that everyone is talking about.

Since the departure of BentleyÝs chief scientist, Dr. Robert Aish to Autodesk, BentleyÝs GC marketing has gone into overdrive and it wants to spread the GC word everywhere. Although you get a full copy of MicroStation, it has to be used in GC mode.

The new BE Communities website is BentleyÝs attempt to create a web destination for infrastructure community members to connect, communicate, and learn from each other. There are Forums, Blogs, a Wiki and Resources. With a corporate culture akin to Intergraph or IBM, this is a positive move on behalf of Bentley. Many of the bloggers have interesting opinions and there are some personalities worth knowing. Unfortunately, the look and feel of the site isnÝt perhaps as relaxed as I would have hoped but itÝs a start to establishing a more personal relationship with its clients.

The last point to mention here but the first thing I noticed at the even was BentleyÝs new logo, colours and marketing. After a long hiatus, Bentley is back into marketing itself to the outside world, with some new executive appointments and a company revamp.

This literally happened a few months before the BE event and so itÝs not fair to judge what direction or vision Bentley will be aligning with. After years of concentrating on its installed base, it seems that the company is now keen to promote its image and products in a more aggressive way, which is good news for those customers frustrated with BentleyÝs self-imposed lack of visibility.

While much can be said of jumping on the green bandwagon, it is BentleyÝs massive armoury of analysis tools that stand the company in good stead to deliver probably the most comprehensive suite of compliance tools to the building and infrastructure markets. If we take BE 2008 as the call to arms, next year I expect to see the company start to better-integrate its suite of analytical tools across its product set.

In the next issue of AEC Magazine we will look more in depth at BentleyÝs BIM and Beyond vision, which was presented in a break-out industry session.