Eurocopter AS 350 B – TopEye Mk II LiDAR system collects 50,000 points per second, to a high degree of accuracy.

Blom Aerofilms is a leading provider of aerial photography and digital map solutions for civil engineering design, environmental assessment, and land information management. According to Chris Gaunt, business development manager at Blom Aerofilms, ýWe have a reputation as an innovative company. We actively embrace new and highly efficient surveying techniques and technologies so that we can operate more quickly with fewer staff. That is why over seven years ago we took a strategic decision to adopt airborne light detection and ranging (LiDAR) as a core technology, supported by a full range of data processing services.¯

To do this, Blom Aerofilms chose the MicroStation-based Terrasolid integrated software suite to process laser data points, adjust trajectories, create surface models of the ground, and to rectify images to orthorectified photographs.

Some years ago, the company foresaw a growing need for rapid, accurate, and cost-effective mapping to support GIS analysis and civil engineering design applications. ýSince conventional surveying techniques were time-consuming and labour-intensive, our challenge was to find a fast and efficient solution,¯ Gaunt explained. ýLiDAR met our needs exactly. Combined with digital photography, it enables us to map large areas of urban and rural landscapes in three dimensions. It also helps us to keep staff off the infrastructure corridor: working on motorway hard shoulders is highly dangerous and track possession whilst surveying rail infrastructure is costly and disruptive to schedules.¯

Blom Aerofilms was formed in 1919 as Aerofilms, with Simmons Mapping being formed in 1965 and acquiring Aerofilms in 1997, becoming Simmons Aerofilms in 2001. It is now part of the 1,000-strong Oslo, Norway-based Blom Group. Said Gaunt, ýAs part of the Blom Group, we have access to 22 aircraft and eight digital cameras, as well as fixed wing and helicopter mounted scanners.¯ The companyÝs client list includes the Environment Agency, the Highways Agency and the national mapping agen«cies of the United Kingdom, Belgium, Denmark, and a number of Caribbean countries. 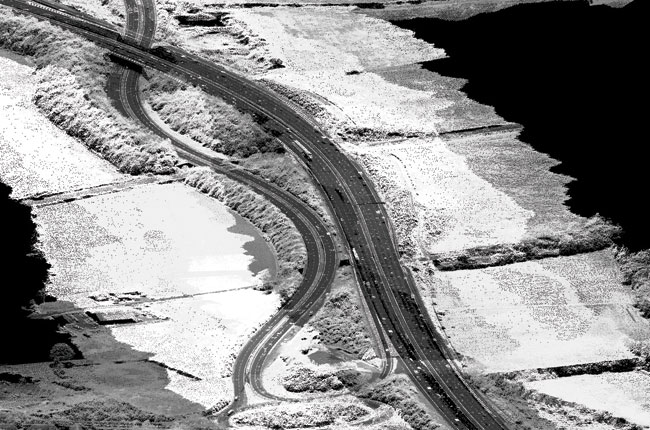 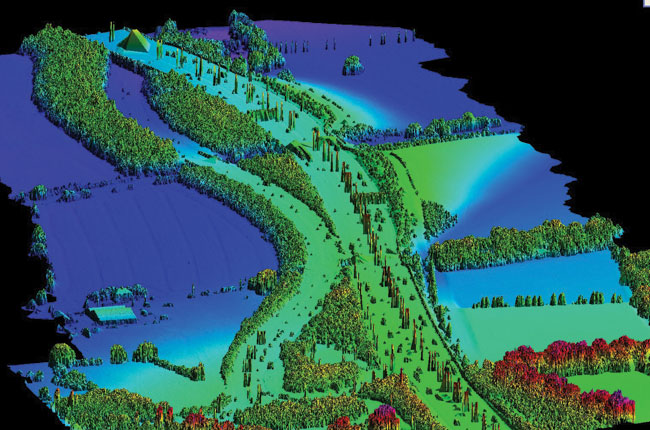 Both helicopter and fixed-wing LiDAR systems scan the surface below the aircraft collecting considerable information on the terrain, achieving height accuracies up to 40mm. Depending upon the system, the scan rates can vary from 50,000 to 100,000 pulses per second, producing a dense cloud of three-dimensional points. The resultant data is loaded into MicroStation and various Terrasolid modules are used to process the data, displaying the results in MicroStation. Every point captured is geo refer«enced and time stamped, and laser journey times are used to compute distances.

Hamish Grierson is CAD manager at Blom Aerofilms and is responsible for ensuring that the data process«ing technology delivers high-quality results on time and within budget. Outlining the process, Greirson said, ýTypically, we split projects into areas of around 300 metres by 200 metres, each one of which contains around 1.5 to 2 million LiDAR points. We classify the points as ground level, low vegetation level, me«dium vegetation level, or high vegetation level. We then create a surface, triangulating all of the points classified as ground.¯

He explained, ýWe can add as many classifications as we want, assigning colours to indicate these different classes. The high vegetation and the ground are the most useful levels because that gives a good indication of trees and buildings as well as the ground. If required, we can also use a com«bination of traditional land surveying of road edges and aerial photography infill.¯ 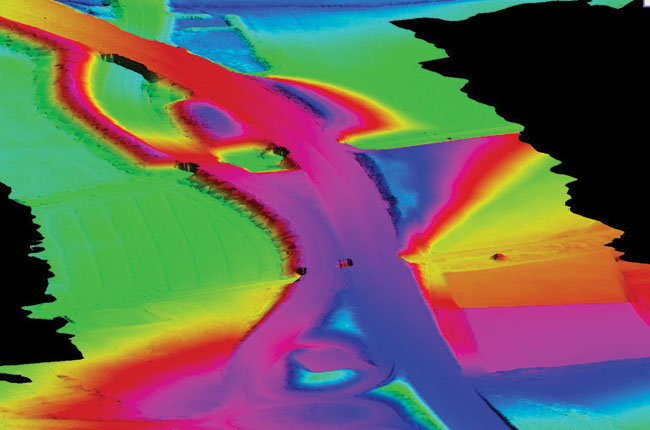 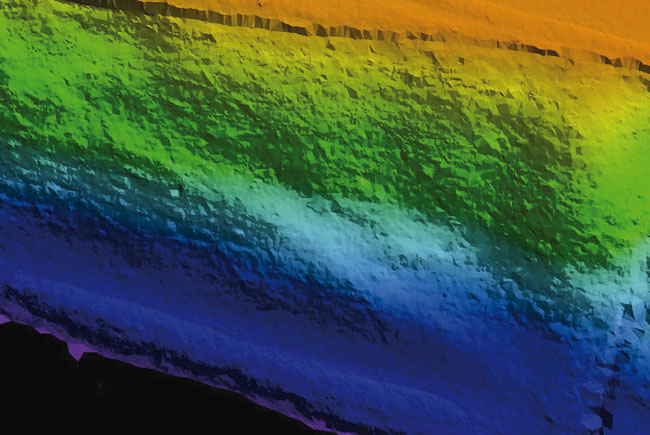 Greirson continued, ýWe operate two LiDAR systems, both of which ultimately depend on MicroStation. We use the Optech fixed-wing system from Blom Geomatics in Norway and initially we used the TopEye helicopter-based system from Blom Sweden.¯ The Mark 2 version of TopEye collects over 50,000 points per second, to a high degree of accuracy. It can be flown at low altitudes and has an excellent ability to penetrate vegetation, producing point densities of up to 20 points per square me«ter, enabling large scale topographic surveys to be undertaken.¯ As Greirson pointed out, ýThe Terrasolid developers made a deliberate decision to use MicroStation because of its capabilities and it is now the graphics engine of choice for LiDAR processing.¯

Greirson recalled, ýAdopting LiDAR, we initially installed one seat of Terrasolid and one seat of MicroStation, increasing this to eight seats as we won more and more contracts. Up to that point, weÝd only ever used AutoCAD. True, we had provided mapping to a major rail client in MicroStation DGN format, but we had done this by converting from AutoCAD DWG format.¯

Greirson explained, ýIn MicroStation V8, Bentley has extended the DGN database to include AutoCAD DWG element types, providing AutoCAD DWG support at the platform level. Because of this excellent support for native DWG, it doesnÝt really matter if the client is using MicroStation or AutoCAD or both.¯ However, for Greirson, ýI have absolutely no concerns at all about running a mixed environment, and we are now finding that more and more clients are asking for MicroStation deliverables.¯

Greirson continued, ýThe way in which MicroStation works is of great benefit to us. To ensure high performance, the large amounts of LiDAR data – often many gigabytes – are held in virtual memory at this point and only saved in MicroStation DGN format once processing is complete.¯ He continued, ýVisualisation and animation is built in to MicroStation as standard and you can attach different line styles to the 3D representation as an aid to un«derstanding and interpretation. Creating dynamic 3D fly-throughs is simple and intuitive. Just create the flight line, press the button, and MicroStation does the rest ± no extra software required.¯

Blom Aerofilms has completed a number of large-scale and high-profile LiDAR-based projects including a full survey of LondonÝs M25 motorway including all carriageway and Ùstubs and tailsÝ, totalling over 250 miles or 1,500 line-miles of data. The project was flown at only 100 metres using helicopter-based LiDAR for vegetation penetration and high accuracy. Gaunt is certain, ýWe clearly made the right decision to invest in LiDAR at an early stage. We are an established player with many successful projects to our name and there is no longer any need for us to sell the benefits of the technology. Through investing in technologies such as LiDAR, we are increasing our competitiveness and we are adding value for our customers. We could not do this without MicroStation.¯