With A360 Collaboration for Revit, team members can automatically see who else is working on the project, and changes made by one team member are immediately visible and available to everyone. No contact lists to manage, and no FTP exchanges needed.

Autodesk A360 Collaboration for Revit, formerly code-named Project Skyscraper, is designed to connect building project teams by giving centralised access to BIM project data in the cloud. The service, which launches in the US next week, is said to overcome the barriers of corporate firewalls and physical location for true centralized access to Revit models by team members in all disciplines from multiple firms or sites. 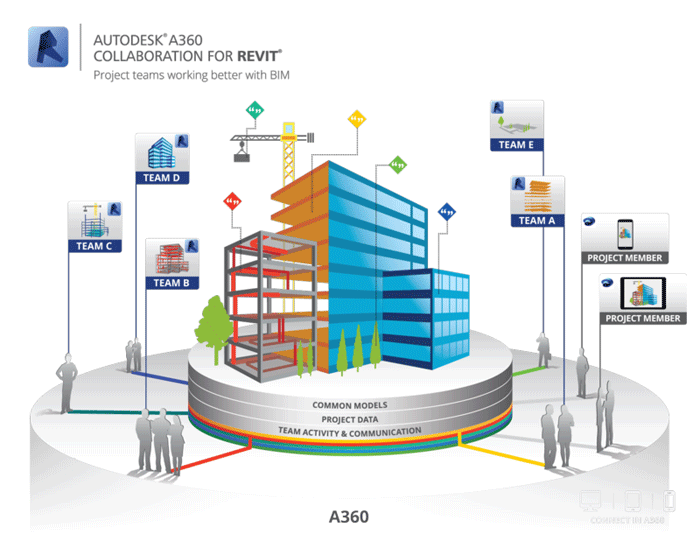 A subscription to A360 Collaboration for Revit also includes access to the Autodesk A360 Team cloud-based project collaboration platform, which is said to allow the entire project team, even project contributors who do not use Revit, to view, search, and socially interact with all project design data.

A360 is available through the web and on mobile devices. A360 Collaboration for Revit includes a ‘Communicator for Revit in-context chat tool’ that enables project team members to communicate directly with each other, in real-time while working on their project models in Autodesk Revit. Communicator provides notifications of new chat messages, connection requests, and sync status for workshared models to help the team work better together.

Describing his firm’s use of the beta version of A360 Collaboration for Revit on a major renovation project for the Oregon State Capitol building, Bjorn Clouten, project manager and senior associate architect at SRG Partnership said: “We’re sharing linked BIM project models with the entire project team in the cloud. Everyone has instant access to the latest information. It’s terrific. We’re enjoying the kind of smooth BIM collaboration that we’ve sought for more than 10 years.” OREGON.JPG CAPTION SRG Partnership used A360 Collaboration for Revit to collaborate on a renovation project for the Oregon State Capitol building, which included restoring the natural ventilation originally intended in the building.

SRG Partnership used A360 Collaboration for Revit to collaborate on a renovation project for the Oregon State Capitol building, which included restoring the natural ventilation originally intended in the building.

Turning its attention to the operations and management of built assets, Autodesk has also introduced a new Field Assets for InfraWorks 360 application that offers cloud-based infrastructure asset management to owners and operators. Available on January 7, 2015, the location-based web application is designed to make site workers more effective by giving them access to the data they need, when they need it on nearly any device.

Traditionally, crews are sent out to inspect infrastructure assets without knowing exactly where assets are or past maintenance history. Reporting has typically been on paper-based forms, which increase the risk of data entry errors when the information made it back to the office. With Field Assets for InfraWorks 360, the idea is that owners and operators will be able to collect, mark-up and share data on these assets in real-time so teams can make better-informed decisions on how to deploy their field workforce for asset inspection and maintenance for optimal productivity and financial performance. Site.jpg CAPTION Field Assets for InfraWorks 360 is designed to help site workers to work more effectively by providing easy access to the infrastructure asset data they need based on their location.

Field Assets for InfraWorks 360 is designed to help site workers to work more effectively by providing easy access to the infrastructure asset data they need based on their location.

“As infrastructure around the world ages and new infrastructure projects are built, assessing the condition of thousands of roads, bridges, pipelines and other assets that are vital to the economy is incredibly important – but has unfortunately been disconnected from the overall project development process,” said Paul McRoberts, vice president, Infrastructure Modelling Group, Autodesk. “In the world of ubiquitous mobile devices and internet access, there is a far more efficient and accurate way to track infrastructure assets. Autodesk is taking big steps towards solving this problem with the release of Field Assets for InfraWorks 360.”

Field Assets is the latest addition to the Autodesk InfraWorks 360 portfolio of applications for civil infrastructure, supporting engineering workflows designed to let civil infrastructure teams design and create in the context of the real world. The InfraWorks 360 portfolio also includes purpose-built applications and complementary cloud services for bridge design, roadway design and drainage design. According to Autodesk, with the addition of Field Assets, the value of the model is extended beyond the early stages of planning and design. Teams can now collaborate throughout the full lifecycle, all the way through to the operations and management of those assets.

In addition to the introduction of the Field Assets service, the InfraWorks 360 Model Builder cloud will now become a commercial service (previously available as an Autodesk Labs preview). CITY.jpg CAPTION Model Builder allows users to select a city-scale area from a map of the world in order to generate 3D city models in minutes.

Model Builder allows users to select a city-scale area from a map of the world in order to generate 3D city models in minutes.