This month we have an excellent all round mobile workstation from Dell and one of the most powerful desktops workstations available. CAD2Ýs latest creation features eight cores with two Quad Core Xeon X5460 processors (codenamed Harpertown) and cutting edge graphics technology from ATI.

COLOSSAL AND POWERFUL are probably the best adjectives to describe CAD2Ýs new Vision DQX workstation. ItÝs a specialist piece of kit, primarily designed for high-end design visualisation, though with a little tweaking on the graphics front the machine will be of equal interest to specialists in the area of structural analysis.

The system is built around two high-end Quad Core processors, IntelÝs Xeon X5460, codenamed ÙHarpertownÝ, which run at an incredibly quick 3.16GHz and feature a Front Side Bus (FSB) of 1,333MHz. IntelÝs Quad Core processors have really taken off in recent months and now match its Dual Core CPUs GHz for GHz. (In fact IntelÝs top end Quad Core Xeon, the X5482, actually outpaces the Core 2 Duo with a clock speed of 3.20GHz and a Front Side Bus (FSB) of 1,600MHz). What this latest technology means for CAD2Ýs Vision DQX is eight of the fastest CPU cores currently available, making it an absolute dream machine for users of multithreaded applications. On test the Vision DQX ripped through all of our standard rendering tasks with all eight cores working together extremely efficiently.

Of course, having all this processing power at your fingertips is of little use if you donÝt have the memory to back it up. The system comes with 8GB DDR-2 as standard, but will be able to take a breathtaking 32GB in its 8 slots when 4GB modules become available. Windows XP x64 Edition provides the headroom for all of this memory but be sure to check compatibility with your existing software. N.B. Autodesk currently ships 32-bit and 64-bit versions of 3ds Max on the same DVD.

All of this cutting edge processing technology is backed up with one of the most powerful professional graphics cards currently on the market. ATIÝs FireGL V8600 is an ultra high-end card featuring 1GB of on-board GDDR4 memory, and 320 Stream processors, which are dynamically allocated to geometry or shader tasks as required. This means you can harness the full power of the card regardless of whether your model is geometry heavy or texture heavy. In practice this translates to unprecedented levels of performance under high-end graphics applications like 3ds Max.

In terms of features the card also boasts 2 x Dual Link support, which means you can drive not only hi-res monitors like AppleÝs Cinema Display at resolutions of 2,560 x 1,600, but go right up to 9 megapixel displays featuring resolutions of 3,840 x 2,400. While many manufacturers stopped production of these breathtaking monitors last year, a revival is predicted in 2008. Stereo support, which can be used for immersive environments, also comes as standard in the FireGL V8600.

In summary, the Vision DQX is a beast of a machine, both in terms of size and performance. The raw computational power on tap for multithreaded applications is astounding and the ultra high-end graphics card provides plenty of power with which to manipulate enormous datasets fluidly. A mainstream CAD workstation it is certainly not but if youÝre in the market for a design viz or analysis powerhouse then ú3,995 could still be money well spent for a machine which has the potential to revolutionize your production workflow.

DELL WAS ONE of the original vendors which fuelled the meteoric growth of mobile workstations and as a result has enjoyed unprecedented success with its Precision M series for many years now. The Precision M4300 sits in the middle of a new three model line up which includes the entry-level M2300 and high-end M6300. The system is based on its business-centric Latitude chassis which is solid in construction and features an excellent 15.4 inch screen which packs in the pixels at a resolution of 1,920 x 1,200 to enable high-definition CAD geometry. The maximum memory is 4GB and the top end CPU in the M4300 is IntelÝs Core 2 Duo T7700 (2.4GHz). Both were both present in our test machine. The professional 3D graphics is provided by the Quadro FX360M (256MB), NvidiaÝs entry-level mobile controller. This is fine for most 3D CAD applications, but will struggle under more graphics intensive applications like 3ds Max. 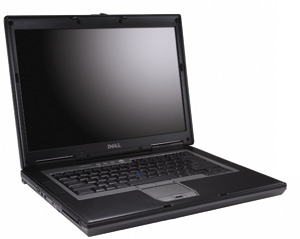 A standout feature of the M4300 is the option of a 32GB solid state drive instead of your normal hard drive. While capacity is smaller than the standard S-ATA drives offered with the system there are no mechanical parts in a solid state drive which improves battery life and durability, but performance can sometimes be slower. With Solid State technology improving all the time it may not be long before it takes over completely from mechanical hard drives in notebooks. In addition to the standard WiFi and Bluetooth the M4300 also includes the option of Mobile Broadband through a tie in with Vodafone. Users simply insert a SIM card and can then browse the Internet or pick up emails wherever they can get a mobile phone signal. However, data transfer rates on these 3G networks can be erratic and slow.

Overall the M4300 is another excellent mobile workstation from Dell with solid build quality and cutting edge features. Previous low-end graphics implementations in DellÝs Precision M series often fell short of customer expectations for 3D CAD. But despite the entry-level positioning of the Quadro FX360M, the controller is not too far off NvidiaÝs mid-range Quadro FX1600M in some CAD applications. My only qualm is that Dell doesnÝt offer the FX1600M as an option in the M4300 because if you want more 3D power, unfortunately youÝll have to sacrifice portability and invest in a Precision M6300 which is a much bigger machine.