Creating architectural models to convey ideas is as old as architecture itself. Model-makers are artisans who give physical presence to drawings or digital 3D models.

3D printing changes the process from artisan interpretation to printing a digital twin as detailed as the electronic original. 3D printers can print the smallest features, smaller than a human hair. The digital 3D model can be printed in full colour, translating material data for realism, or with an inexpensive monochrome material for conceptual or massing studies.

Curved rooflines, staircases, and round walls are no more difficult to print than simple orthogonal designs. Project size is not a problem; 3D models can be divided in the computer to be printed in sections and assembled, making it possible to create physical models of any realistic size and scale. 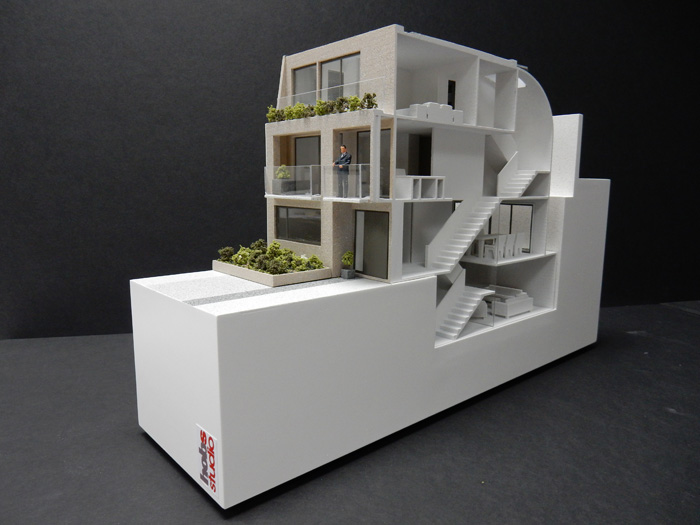 From Utah to the world

Whiteclouds of Ogden, Utah, USA has become a global leader in providing 3D printed architectural models. Experienced Internet entrepreneur Jerry Ropelato decided in 2013 to start a 3D printing service bureau because it combined his two passions for technology and “building things.” He thought at first his clients would only be manufacturers, but almost immediately got assignments from builders and architects. Today 1/3 of Whiteclouds’ business is in architecture. The company has become one of the world’s largest fullcolour 3D printing service bureaus, with 30 full-colour 3D printers in a 60,000 sq. ft. (5,574 m2) facility.

A dedicated in-house design team has all the leading 3D architectural software products on hand, and can also create 3D printing model data from 2D drawings. More than half the company’s AEC business is from builders, not architectural firms. “Builders are driving [3D printing] more than the architects,” says Ropelato. “Prices are coming down, and the old models are expensive. We have good discussions about finished buildings and the design process.”

One client is a large scale builder of homes and commercial building, with thousands of projects per year. Mr Ropelato says this builder now requires architects to submit their plans “3D print ready”. The models are used for internal meetings; when the project is finished the 3D model becomes a gift to the new owner.

Even though 3D printing is an automated process, artisanal skill is still required to create the finished model. Sometimes detailed elements do not scale well, such as church spires, banisters and deck railings. These elements will be printed separately out of scale and fitted into the final model. Very few of the 3D models sent to Whiteclouds are 100% ready for 3D printing. “We might work for an hour, or a week, to get a model ready for printing,” says Mr Ropelato. “It is more about the user than the software, but no product is to the point of simple click-and-print.”

It is getting easier for the detail work in D models to be printed. Architects are becoming interested in printing brickwork, roofing, or other elements in realistic detail. “If there is a granite boulder in the front lawn, we make the boulder look like granite,” says Mr Ropelato. 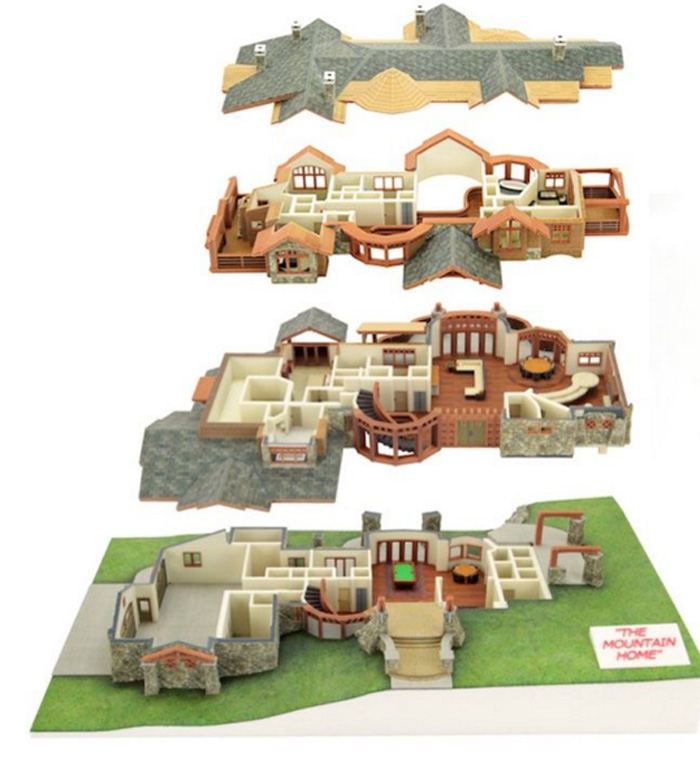 Complex models are often printed in sections, not only for easier assembly but also for the ability study interior elements. (Source: Whiteclouds)

Some architects are now requesting models at multiple stages in the design process, often monochrome early and then with colour and full detail toward the end. Interior designers are also ordering 3D printed models. “We show rooms with paintings on the wall, designs in the rug, or wood flooring. Unbelievable detail is now possible.”

The value of a digital twin printed in 3D sometimes comes up in unexpected ways. Whiteclouds once sent a printed 3D model of a $5 million home to the architect. They got a call complaining about the back of the house lacking some windows and walls.

The Whiteclouds design team then went back to the digital model and realised it lacked these details as well. “The cost of the model more than paid for the discovery of the mistake that would have come if the plans went to the builder,” says Mr Ropelato. “Sometimes seeing that physical model makes all the difference.” 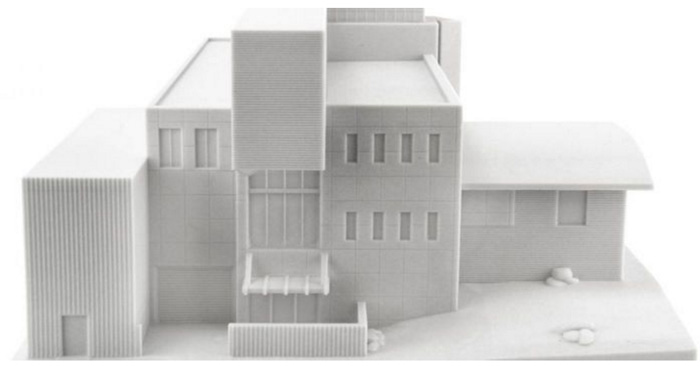 London-based Hobs Studio is part of Hobs Reprographics, in service to the UK architectural industry since 1969. The Studio evolved as the company realised other services besides 2D printing were necessary. Today Hobs Studio offers 3D printing, 3D laser scanning, high-resolution visualisations and animations, BIM support services, and even creation of augmented reality and virtual reality visualisations with offices in London, Manchester, Glasgow and Bristol.

Hobs has found it can create highly detailed, accurate, and cost-effective physical architectural models in 1/4 of the time it would take using traditional methods. Depending on the job, it uses 3D colour jet for high-resolution, full colour projects; 3D multi-jet for small plastic parts requiring toughness; and 3D stereolithography, the original 3D printing technology, for larger models and early concept architectural design.

In 2012 Hobs had one 3D printer, tucked away in a back corner of the studio. “I would fix the files, then print them, take them out, deliver them, then run out and get more work,” says Michelle Greeff, studio director at Hobs. Today the Studio has multiple 3D printers, for a wide variety of work. Greeff says construction and civil engineering clients often ask for colour prints of pipe systems, electrical lines, and even underground train lines. The use of colour in such complex models provides clarity unmatchable by monochrome.

“Architectural models are the most difficult,” says Ms Greeff. Large projects must sometimes be shrunk down 1000:1; it becomes a challenge to keep all the details. Some projects require more digital set-up work than others. “The remodelling of [London] Victoria Underground Station took an entire week to fix.”

Hobs Studio is only too glad to repair 3D files for 3D printing, but also supports clients by teaching them to do the work. “We teach people how to make good files,” says Ms Greeff. “We’ve learnt so much through the years, we know what the problems are, so we can throw in a bit extra TLC and help with the file side.”

The future of Revit
MicroStation at the heart of LiDAR surveying solutions
A breath of sea air
Defending design
Autodesk invests in facilities management firm
Graphisoft big in Japan
AstraZeneca: safety first with SafetiBase
BIM with a view
Previous Post
Next Post